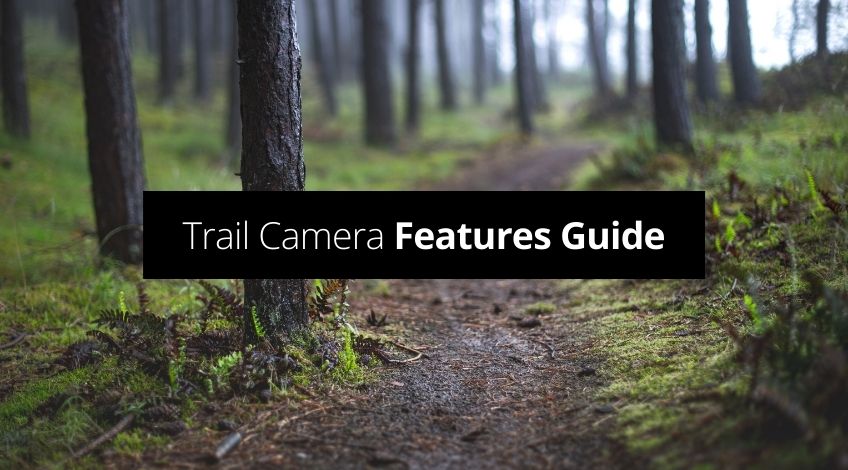 As the technology improves, more and more people are realising the benefit of using trail cameras. If you’re thinking of investing in a trail camera, be sure to read the whole of this article so that when you do decide to buy one, you’ll have all the relevant information to ensure you buy the correct trail camera for your needs.

How Do Trail Cameras Work?

Before we get into the specific features available on trail cams, it’s best to know something about the way they work. This will help to understand the various features and also help you decide if a certain feature is necessary for your needs.

A trail camera is designed to be kept in an almost perpetual state of sleep, much like a TV set on stand by. With just the motion sensor constantly working, most trail cams contain workings much like burglar alarms, with a passive infrared (PIR) detector. Once the PIR detects any movement it sets in motion a number of sequential actions.

Firstly the level of light is calculated and the flash set accordingly, then the camera focuses on the object that triggered the PIR. Shutter speed is then estimated, and then either a series of still photographs are taken or video footage is captured depending on how you set up the trail cam. These images are stored on a memory card, usually an SD card.

The amount of area and distance the camera can see depends on a number of things. The lens, the image sensor, the amount of light produced by either the flash or infrared flash, and the time it takes to trigger the camera. Some have faster trigger times allowing multiple photos of the same object, others just get the one image each time the PIR is triggered.

There are 10 main features to consider when looking at purchasing a trail camera, they are;

For instance if a large creature was in range of the trail cam but not moving, the chances are the camera wouldn’t detect it. The creature, be it large or small needs to be moving for the trail cam to detect it. How sensitive the camera is to this temperature change depends on the make and model of trail camera you choose.

This is the time between the detector sensing a creature, and the camera capturing the image. It is very much dependent on the type, make and model of camera but the trigger time can vary between 0.1 of a second to 1+ second. This can be the difference between seeing an animal or getting a picture of empty space.

The trigger time will usually be slower if set to video recording than for photographic images. But we would recommend buying the fastest reacting trail camera you can afford as that way you’re more likely to capture any image whether that’s video or photographic.

This is the time it takes for the camera to reset to take the next image. There’s not much point in having a fast trigger time if the reset time is slow. The best quality trail cams have an instant reset time. Which means image after multiple image. Which is a very useful feature if say, a herd of deer walk by.

Most trail cameras have a fixed focal point, this allows for clear images directly in front of the camera but shows nothing to either side. There are exceptions to this, some companies offer specific cameras for watching bird feeders/boxes etc. Details for lens types can be found on manufacturers websites.

There are 3 different types of illumination available for trail cameras which are;

The quality of the images are affected by the light used to illuminate the objects captured, but also by the amount of megapixels contained within the resolution. The higher the megapixel count, the better quality the image will be. Beware though, because the more megapixels the more memory will be used with every image stored.

Image settings include still photographs and video imaging and the ability to store both. Most trail cameras have the ability to do both but it’s worth remembering that the trail cams with the fastest trigger times and reset times only work by taking only photos. Another consideration is that video footage will need to be illuminated for the duration of the video which takes extra power to maintain.

If possible, choose a trail cam that has the ability for sequence photos where up to 10 or 12 images are taken in quick succession. This will give near video quality but use far less battery power to achieve.

As the larger the memory card in the trail camera the more images it can hold, it makes sense to install the biggest memory card you can get. But check with the manufacturers first as some have limits on the size of memory card they can work with. SD (memory) cards have a class system, which runs 2, 4, 6, 8, and 10.

The higher the number on the card, the faster the card will work and the more it will cost too. If you choose too low a class SD card, it will slow the trigger and recovery (reset) time of the trail cam and can also stop it from working at all. Again check the specs to see the recommended card and class for the trail cam you choose.

The majority of trail cams are powered by a large number of AA batteries installed into the trail camera container. Some models work with rechargeable batteries and some even use solar powered energy via a solar panel. If you’re concerned that your trail cam could get stolen, we recommend not using solar powered trail cams as the solar panels are a dead giveaway.

There are a number of other features available to some trail cameras including;

This feature can be used to take regular images of a certain plant as it grows, building as it’s erected etc. The sequence can then be made into a movie and played at normal speed like a movie. So a 3 month timelapse sequence can be played as a 10 minute film.

Using mobile phone technology, you can connect your mobile telephone to your trail camera and leave the camera for longer periods of time without having to disturb the site. The problem with cellular connectivity  is it can take a lot of power to operate and needs to be constantly connected to a wifi system.

Trail cams cost a fair amount of money so it makes sense to secure your camera. Most cameras are fitted with the option of fitting a python lock or similar. Of course keeping your trail cam hidden is the first line of defence and possibly the safest way to start. There are also trail camera cages that are screwed to a post/tree and the trail camera is then locked inside.

This is basic photography science, the faster the shutter speed, the more likely you are to capture a fast moving object. But fast shutter speeds allow less light to enter the camera and will therefore produce duller images.

Cheaper trail cameras often don’t have a screen, just a one digit size screen almost like a calculator screen which is used for settings etc. But as trail camera technology improves screens are becoming more common. They are useful because they can be used in the positioning of the camera which can save time on setting up trail cameras.

This feature allows you to see exactly where the detector will detect any movement and set off the camera. Usually by triggering the light to flash by moving your hand or foot you will know where to adjust the positioning of the trail camera to get the best chance of capturing a decent image.

This is the invisible area that begins at the front of the camera and spreads out in a rough V shape. This area is often larger than is really necessary so don’t go to the extra expense of a large detection zone unless you actually need it.

This refers to how sensitive the trigger is, depending on how sensitively you set your camera up will determine if the camera is triggered by slightly wind blown twigs or actual animals. Sometimes it’s possible to set the sensitivity for further than the camera range which means once the camera has been triggered the animal will be completely in shot.

This is handy for setting up the angle and aim of the camera especially on rough or dense terrain. Although not so useful in flat, open spaces.

Usually only available on top models, this feature allows GPS coordinates to be embedded onto maps to make tracking easier.

This is another feature that you might find useful as it can record information like the phase of the moon, the weather, the barometric pressure , the temperature, time of day (or night) etc.

What is the best setting for a trail camera?

For viewing wildlife the best positioning for a trail camera is between 3 to 4 feet from the ground but unless you can disguise it well, this is also the easiest place for your trail camera to be detected and stolen.

What does PIR level mean on a trail camera?

PIR level on a trail camera means passive infrared and PIR level indicates the range the PIR can detect movement and set off the camera.

Trail cameras are triggered by either motion or temperature fluctuations.

Do game cameras flash at night?

All modern trail cameras are capable of night photography, some use white light (like camera flashes) some use infrared or lowglow lighting which shows as a red glow, and some use noglow or black infrared lighting that actually shows no visible light at all.

What is the difference between a trail camera and a security camera?