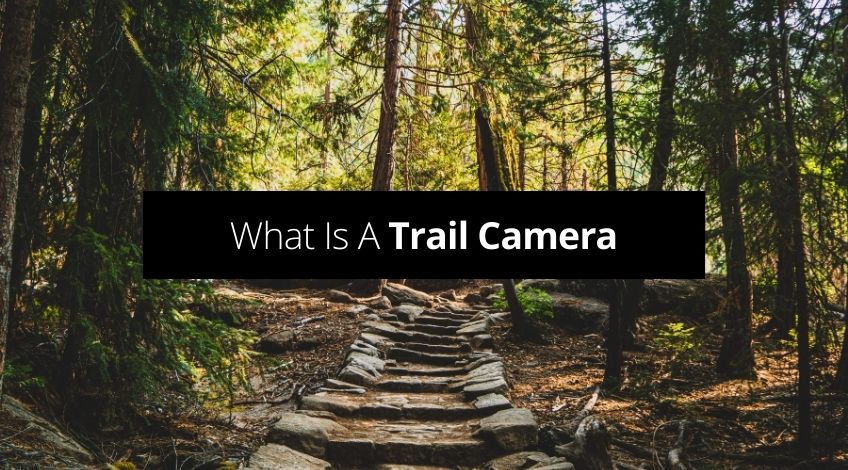 What Is A Trail Camera? (everything you need to know)

If you’re interested in a trail camera but are not quite sure which is best for your needs, you’re in the right place. In this article we’ll cover all you need to know about trail cameras. What they are, what they do, how they work and what to look for in a decent trail camera.

What Is A Trail Camera?

Trail cameras have many names including;

They are described as weatherproof, rugged, digital cameras powered by batteries that use a removable memory card to store recorded video footage or photographs that can be recorded day or night. Most trail cameras are either green or brown to camouflage them into their surroundings.

Where Should A Trail Camera Be Placed?

Trail cameras can be strapped onto the stem or branch of a tree, or to a post, placed on a tripod, or a spike in the ground. There are even trail cameras that can be disguised as rocks.

Once placed into position and activated, a trail camera can be left for weeks without having to be disturbed. During that time they will record all action that takes place within its environs for weeks at a time.

Trail cameras are extremely popular with security experts, wildlife film makers and researchers. Trail cameras were originally conceived for the hunting market, but they have proved useful for many other practical uses including;

How Does A Trail Camera Work?

Trail cameras work by being in a perpetual state of stand by, and only activating when they detect movement which can be set to be as sensitive as a bush swaying in the breeze or they can be set to ignore casual movement and only record large objects. They work day and night constantly seeking movement, at night they switch to infrared to record without alerting the subject.

You just place the camera in a concealed position that commands a good view of the area you want to watch, set the controls via the internal buttons, close the casing and walk away.

What Are The Main Features On A Trail Camera?

Below we’ve set out the most common and therefore often found features on a trail camera which include;

Sensitivity
How sensitive the motion detector is depends on what you’re actually trying to detect. Most are sensitive enough to activate purely from the slight movement of trees or bushes, but they can be adjusted to just detect positive human or animal movements. Most can be set to capture an image in less than ½ a second. Anything above ½ second, can result with lots of empty frames or tail ends of animals/people.

Type Of Recording
Most trail cameras come with options for shooting video or still images. Video footage uses more memory than stills. You can adjust settings for the quality of the images and the size and clarity.

Recovery Speed
This is how fast the camera can reset itself and take another image. Slow recovery speeds will save on battery life and memory but could miss out on the all important images.

Photo Bursts
Many trail cameras can take multiple shots in rapid succession this can increase your chances of getting a great shot.

Trigger Speed
This is the time taken for the camera to take the photo once movement has been detected. To capture fast moving objects, you’ll need a fast trigger speed, preferably below 0.3 seconds which will allow your camera to capture the image before the animal moves out of shot range.

Detection Range
This is the furthest distance the camera can be from the object before triggering the camera. This can range from 40 feet to 120 feet. The further away from the image, the less clarity the image will have, especially if the trail cam has low megapixel camera equipment.

Field Of View
This is how much can be seen by the camera and is dependent on a combination of the type of lens, the type of image sensor, the level of light (either natural or flash/infrared/black infrared) and the trigger time.

The above are common to pretty much every trail camera available, but below are some specific features that you will need to check before buying. They include;

Moon Phase
If you are a serious hunter without too much time on your hands to go scouting, this can be an important feature.

Temperature
These detect human or animal heat before activating either video or photographic footage.

Time Lapse
This feature allows you to set the interval between each photo which produces a snapshot of any activity. This feature is often used to record construction development, plants growing, the changing seasons etc.

Time Stamps
If you want to collate the information of the times of the day when activity occurs or even the days of the year this feature will be useful.

Battery Life
Batteries will run out of power faster in areas of high activity. Alkaline batteries cost less, but can degrade picture quality with subsequent use and at lower temperatures. Lithium batteries last longer, are often rechargeable and give better service in cold conditions plus they produce better quality images.

Solar Chargers
Some trail cameras contain solar packs for recharging or have the ability to attach a solar charger. These can, in theory, run indefinitely; however, they’re not so good in dense woodland or in overshadowed positions.

Screens
Some trail cameras have LCD screens which make setting up the trail cam easier. You can view saved images immediately and directly on the camera without any need for an adaptor. Choose this option if you can’t wait until you get home to check the footage. Trail cams without screens cost less but you need to get the SD card out and installed into a PC to view the footage.

Image Storage
Trail cams typically use a SD card to store images, depending on the type of images and frequency of shots you will be better off with as large a memory card as possible. These can be taken home to review any images so it’s best to have two SD cards for each camera (one in and one at home).

Night-Time Lighting
To get a good image at night, the trail camera will need some sort of artificial lighting. There are three types of lighting systems to choose from and some are better than others.

Picture Quality
This is determined by the number of megapixels. A high number of megapixels equal higher resolution images that will also look good when zoomed in. Megapixels are only as good as the actual camera lens, check some sample shots before purchasing if possible. But top quality imaging is not always the main criteria for trail cameras. Consider all of the available features and decide which is best for your needs.

Hybrid Mode
This feature allows the trail camera to take photos and video footage at the same time. This is useful if you want as many images as possible of any and everything that falls into the range of the camera.

Resolution
The  image quality of both photos and videos depends on the resolution of the trail camera. Many trail cams have settings that can change the resolution either increasing it by interpolation or decreasing it by compression.Compression is useful if you intend to leave the camera running for long periods of time without clearing the memory card. Interpolation will produce a larger image by adding pixels. Check the specs for the true sensor resolution.

There are a selection of accessories available for some trail cameras but check their compatibility before buying. They include;

Where Should A Trail Camera Be Placed?

Once you have decided on the general area you want to place your trail cam, here are some pointers on where to place the camera for maximum effect.

How Are Trail Cameras Powered?

Most trail cameras are powered by batteries (usually AA batteries and normally around 8 batteries per unit). As we said earlier lithium ion batteries last longer, and work better with trail cameras too. Some are compatible with solar powered chargers and panels which is great if you plan on leaving the trail cam unattended for long periods of time.

What Are Cellular Trail Cameras?

As the name implies, cellular trail cameras work using mobile phone or cellular signals to send images to your phone in real time. Instantaneous images can be the difference between losing valuable equipment and notifying the relevant authorities and getting the criminals captured in the act.

Obviously cellular trail cameras are dependent on your mobile network and we would recommend at least three bars of signal to operate them efficiently. Most cellular trail cams work by sending photos to your phone via an app. You can allow the app to send you real time images when anything triggers the motion/ heat sensor on your trail camera.

Some offer live streaming on your phone, and on some it’s possible to make remote setting changes and check on battery life via the app.

How Much Does A Trail Camera Cost?

The price of a trail camera depends on the features and capabilities but a decent trail camera costs anywhere between £130.00 to £400.00.

What Other Types Of Wildlife Cameras Are There?

There are three main types of wildlife cameras all of which will allow you to view some great images of wildlife. They are;

In the UK there are no laws to prevent anyone from taking photos in public spaces. So trail cameras are legal.

Can you use a trail camera as a security camera?

Yes you can use a trail camera as a security camera, we have clients that successfully caught thieves stealing garden equipment and furniture using a trail cam.

Are trail cameras worth it?

For anyone who enjoys watching wildlife, hunting, or even for home security, trail cameras are definitely worth it.

Trail cameras do not need wifi to operate, but to hook up with mobile phones etc they do need to be connected to a wifi system.

What is the difference between a game camera and a trail camera?

There is no difference between a game camera and a trail camera, it’s just a different name for the same object.