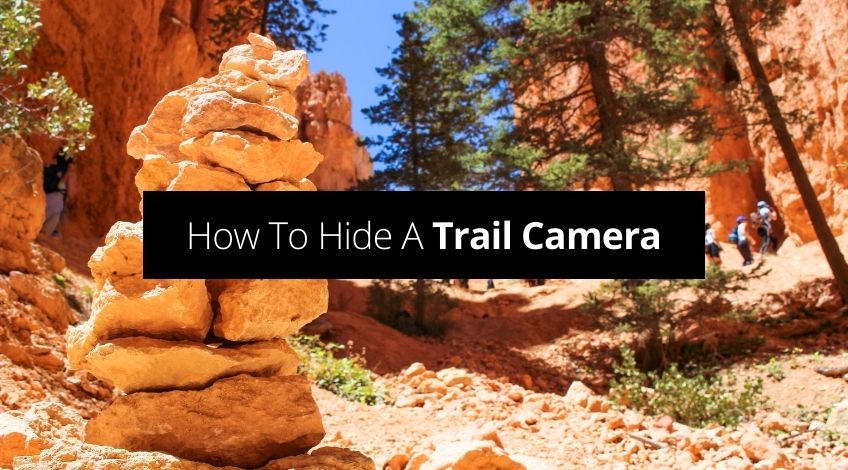 How To Hide A Trail Camera (easy tips to stop theft)

We have some statistics here that might just shock you, according to grandview research[1] the global trail camera market size was valued at $86.6 million in 2018. That’s a lot of trail cameras! Trail cameras are becoming popular with many groups of people; Hunters, bird watchers, wildlife enthusiasts, security companies, surveillance companies and thieves.

That’s right, thieves. The trail cam business (as we’ve just seen) is massive, close to $90 million spent on trail cams globally in 2018, and how many were exchanged on the black market?  Where professional thieves and chancers operate below the radar of law enforcement and statistic gatherers.

So if you have spent your time doing research into the best trail cameras to suit your needs, and invested your hard earned cash on buying the best trail cams available, you’re going to need to protect your investment wisely.

How Much Does A Trail Camera Cost?

A quick search on a famous online marketplace brings back results of trail cams costing anywhere between £20.00 to £400.00 with the average price for a decent model being around £130.00. Investing that much money to learn more about the way local wildlife operates is a sound investment. But you’re going to want to protect that investment.

It’s Not Just Money You Lose

It’s not just the cost either is it? Not if we’re being honest, apart from the fact you’ve lost money and time, if your trail camera is stolen you also lose just a little more faith in humanity. To prevent this loss (on many levels) you need to learn a few things about the average trail camera thief. Most trail cam thieves are opportunists, they stole the trail cam because it was there, and easy to take.

Ways To Prevent A Trail Camera From Being Stolen

Unfortunately there is a ready market in stolen goods, many people can’t believe their luck when they get offered a top of the range trail camera for a fraction of the cost in the shops. Some are willing to turn a blind eye to where it came from, and that’s the reason these thefts are on the increase. Demand creates the need to steal more for easy money, you can prevent your trail cam from being the next statistic.

Many trail cams come decorated with camouflage paint jobs, improve on that by securing twigs, leaves or vines around it to make it as unnoticeable as possible. It should then blend into the natural surroundings and the thieves will walk straight on by without noticing it.

2. Keep Your Trail Cam Out Of Sight

This might seem obvious but you’d be surprised just how many trail cameras are secured to a tree at eye level, completely clear of any obstructions. Sure, you want to get a clear unobstructed image, but if the camera can be seen clearly, it can be stolen easily too. Look around the woods, and think of the least likely place a poacher or thief is likely to look, that’s where you should place your camera.

3. Off The Main Track

You might want to observe the main track through the woods, but that doesn’t mean the camera has to be on that track. Try angling the camera from the edge of the track, up high, more than 10 feet high is best. The harder it is for you to place the camera in the first place, the harder it will be for a thief to spot it, or remove it.

higher up in the trees, the less likely a thief is going to spot your camera, especially if the area is overgrown or has lots of exposed roots across the path. The thieves will be too busy watching their footings to look up at any concealed cameras.

If you’re looking for small mammals or amphibians and you need your trail camera to be low down to the ground, be sure to conceal it with rocks or bushes. Anything that doesn’t make it obvious there’s a camera there.

6. Never Use Black Nylon Straps To Secure Your Trail Cam

Black horizontal lines are not exactly common in woodland. They will stick out and are so obvious that you might just as well point a luminous arrow at your trail camera. We know lots of trail cams come supplied with a black nylon strap, but they are a dead give away. Black straps can be seen over long distances especially if they’re at an incorrect angle to the rest of the woods. Also, nylon straps are so easy to break, any pen knife will cut through that strap, and most thieves/poachers carry a knife.

If mounting the trail camera high up is where you want yours to be placed, use screws to secure it to the tree and take that nylon strap back home with you. Using screws you can secure your trail cam higher up in the trees angled towards the trail.

8. Use A Security Box

Check the size of your trail camera before buying a security box as they’re not all compatible. Once you do get the right one, you still need to conceal the box as best you can but it does give another level of security that any would-be chancer will have to break through to get to your trail cam.

9. Use A Python Lock

Python locks consist of a cut resistant steel cable coated in tough vinyl with a four pin cylinder mechanism which makes lock picking difficult. Let’s face it most opportunistic thieves are relatively lazy, and if it looks like taking your trail camera is going to be too much like hard work, the chances are they’ll move on to easier pickings.

A smaller trail camera will be easier to conceal and therefore less likely to be seen by would-be thieves. One feature that often makes trail cameras large is the LCD screen, it’s nice to have the ability to check footage on site, but it’s not essential. Smaller cameras that don’t have LCD screens are smaller, lighter, easier to conceal, cheaper to purchase, and less likely to get spotted or stolen.

11. Consider A Trail Camera Linked To Your Mobile Phone

Trail cameras with a cellular link, send images to your phone via an app. This means you’ll be able to see what’s happening with your trail cam in real time, as long as the batteries are charged. The downside of trail cams with cellular linkage is they cost more than standard trail cams. But you don’t need to be constantly checking on your camera, adding more human scent to an area where the wildlife can be skittish.

12. Purchase A Trail Camera With A Security Code

Some of the top of the range trail cameras come with integrated security codes that don’t allow access until the security code is entered. This is an extra level of security and makes the trail cam useless to any thieves because without the code they can’t use it. But that doesn’t prevent them from stealing it in the first place. You will still need to conceal the camera and secure it from being taken.

13. Choose A No Glow Trail Camera

One of the main giveaways when it comes to trail camera theft is the flash from the camera. There are three ways the image is illuminated during darkness they are;

White Light Flash
Just like a standard camera flash, a bright white light flash and a dead giveaway for thieves.

Black Infrared
Also called no-glow lighting, produces no visible light at all and are therefore invisible to potential thieves.

It’s not just the flash that can reveal the position of the camera either, some motion sensors start with a small red LED when triggered. Although small, these lights are just enough to get the camera spotted however well you try to conceal it. Be sure the camera you buy doesn’t have any indicator lights, however small.

An old bird nesting box suspended high in a tree is not going to attract any unwanted attention from would-be thieves and is the perfect place to conceal a trail camera.

Similar in design and shape to a nesting box, a bat box makes another great hiding place for a trail camera.

Ways To Recover Your Trail Camera If It Gets Stolen

Sadly losing possessions to thieves is all part of modern day life. But there are ways to help recover stolen goods. Here are a few ideas to help you get back what rightfully belongs to you.

Before you ever install your trail camera onto a tree or wherever you intend to put it, open it up and scratch your postcode into the actual body of the trail camera. This won’t stop it getting stolen, but it might just help you to recover your property if it does go missing. The police will be able to identify your property if it comes into their possession and you’ll be able to prove it’s yours if you scratched your postcode onto it.

If you have more than one trail camera set up, and the thieves miss taking one. Recover any footage from the remaining camera and post any identifiable images on social media with a description of what you had stolen and where from. Add that if it’s not returned in24 hours you’ll be taking the evidence to the police, but if you get it back within that timeframe you won’t press any charges.

You’ll be surprised at just how powerful social media can be in getting your stolen items returned. Often a kind soul will recognise one of the thieves and mention your post, this is often enough to get your cameras returned.

Keep a record of the serial numbers of all of your trail cameras, if they do get stolen you have concrete evidence that they belong to you. If the police recover them, they’ll know who to return them to.

How can I hide my trail camera for home security?

For home security, hide the camera in a bush or tall tree facing towards the house.

How does a trail camera work at night?

How do you secure a trail camera on public land?

To secure a trail camera on public land you should securely lock it into position using a python lock or similar.

How long can a trail cam record?

Depending on the make and model, trail cameras have the capability to record for between 3 to 300 seconds. Most have settings which allow you to determine the length of recording time.

Do you need signs if you have security cameras?

It is not a legal requirement to have signs warning of security cameras.