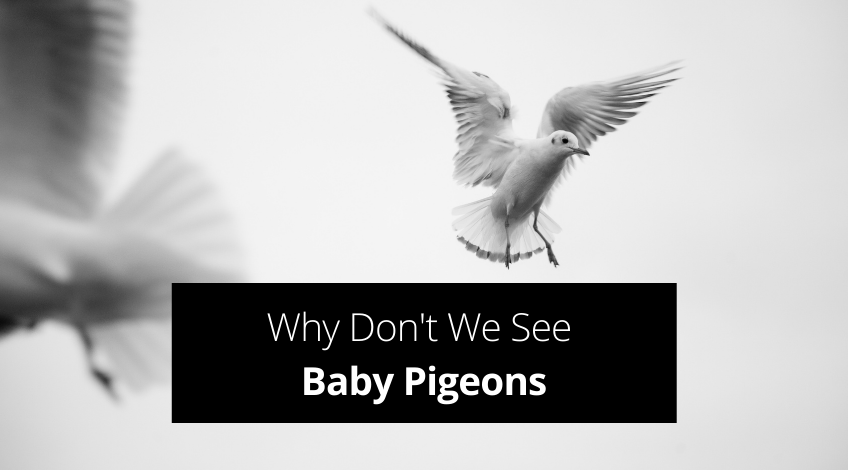 Why Don’t We See Baby Pigeons?

It’s an interesting question, and after some research, the answer makes perfect sense. The reason we don’t see baby pigeons is because the babies stay in the nest for more than 40 days, which is twice as long as most garden birds. So once the fledglings do appear, they are the same size as the adult birds.

The chicks are fed on a regurgitated pigeon milk which is a secretion that comes from the lining of the crop of the parents. It is common among all pigeons and doves and some other birds including flamingoes when it is then called “crop milk”. This milk is full of fat and protein so when the squabs finally leave the nest they are fully grown pigeons. It’s good stuff, the baby pigeons double in size daily while being fed this “crop milk”. These young adults look almost the same as their parents.

The young pigeons are lacking the shiny purples and greens around their necks that the adults have. Plus the wattle type growth on top of the bill is a grey-pink rather than the parents which is bright white.

The newly hatched baby pigeon looks almost alien-like, with its pinkish brown skin, pink beak, and a fuzz that can be yellow or white, that eventually turns into feathers. The baby’s wings, feet and beak are completely disproportionate to the size of its body, but it will grow into them with the help of the crop milk. As it grows and the feathers start appearing the baby begins to look like its parents. Once it’s around 2 weeks old it will be getting its feathers and they will be changing colour.

We Do See Baby Pigeons (Sort Of)

As baby pigeons spend the longest time of any bird in the nest (40 days) feeding on their parents’ milk (sort of), and as they are still juveniles once they leave the nest (even if they are nearly full grown), then we do see baby (or young) pigeons. Baby pigeons share their

nickname –  squab with baby doves (which are of the same family) and baby chickens.

Where Do Pigeons Nest?

Pigeons are descendants of Rock Doves and as the name implies, rock doves nest in high, rocky cliffs and caves. The urban pigeon nests in the town or city’s answer to a cliff, a roof top or a ledge under a bridge, or the town’s answer to a cave, an abandoned attic. They prefer flat surfaces but they must be high. That’s why we don’t often see a pigeon’s nest or the baby pigeons inside.

Wild rock doves are essentially where our pigeons originated. Rock doves are the ancestors of all pigeons, wood pigeons and urban or feral pigeons. If you would like to see wild rock pigeons in the UK, you’d have to travel to coastal areas of either Scotland or Northern Ireland. But as they are so similar to the feral pigeon that is found everywhere there’s little point in travelling too far.

Way back in the year 2000 the then Mayor of London Ken Livingstone was so fed up with having to budget for the cleaning of statues and other tourist sites and landmarks around the capital city, that he waged war on the massive pigeon population. In one interview at the time he called them “rats with wings” and he concentrated his efforts to try to get them removed from Trafalgar Square, a popular London landmark.

An opposition group was set up called the Save The Trafalgar Square Pigeons (STTSP). They claimed to oppose cruelty to all wild birds, but especially the pigeons around Trafalgar Square. Livingstone stopped the bird seed sellers from operating in the square and even introduced a  Harris’s Hawk (which is a bird of prey also known as the Bay-winged hawk or Dusky hawk) to bring down the number of pigeons. The number of pigeons was reduced from 4000 to 200 and a bye-law was passed making it illegal to feed the birds in and around Trafalgar Square with fines of up to £500 if caught breaking that law.

Why Don’t We See Any Baby Garden Birds?

How To Identify A Feral Pigeon

If you are a UK resident you probably already know what a pigeon looks like but as they are similar to some other bird species here’s how to be sure it’s a pigeon. Pigeons are a blue-grey colour with a darker head, two black stripes or bands on their wings, a black tail and purple/green throat feathers. They range in length from 32 to 37 cm (12.5 to 14.5 inches) and have a wingspan of 64 to 72 cm ( 25 to 28 inches).

The eyes are red or orange with a pale inner circle in adults or a brown inner circle in juveniles. Pigeons have red legs and feet, a black bill with a white cere and white lower back feathers.

Birds Of A Feather

They are often to be seen in flocks, all pecking at the ground in search of food, and when spooked, they take off as one and circle the area several times before coming back to continue their pecking.

Other UK Birds Related To The Pigeon

We already mentioned the Rock dove but there are many other British birds related to the pigeon and they include:

Stretching further afield, geneticists claim that the pigeon is also related to the Flamingo, but not the chicken.

Do you ever see baby pigeons?

You never see baby pigeons because they are nearly full grown when they leave the nest. They spend twice as long in the nest as other garden birds.

Baby pigeons are rare because they don’t leave the nest until they are fully grown.

What is the lifespan of a pigeon?

The lifespan of a pigeon is very much dependent on where it lives, in the wild pigeons tend to live between 3 to 6 years, but in captivity some have lived up to 10 or even 15 years.

Where do pigeons sleep?

Pigeons sleep on roofs of houses and other buildings, they look for safety – away from any predators, and shelter from the weather.

Pigeons are actually very clean birds. Mankind and pigeons have lived alongside each other for millenia.

Do pigeons use the same nest twice?

Pigeons do often use the same nest, they just add fresh nesting material on top of the stuff they have used before.

Are all pigeons vermin?

This depends on your point of view, some people consider pigeons to be vermin, but others know they are highly intelligent birds.

Why do pigeons lift their wings in the rain?

Pigeons lift their wings in the rain, to clean their feathers. They then preen themselves in order to fly better.