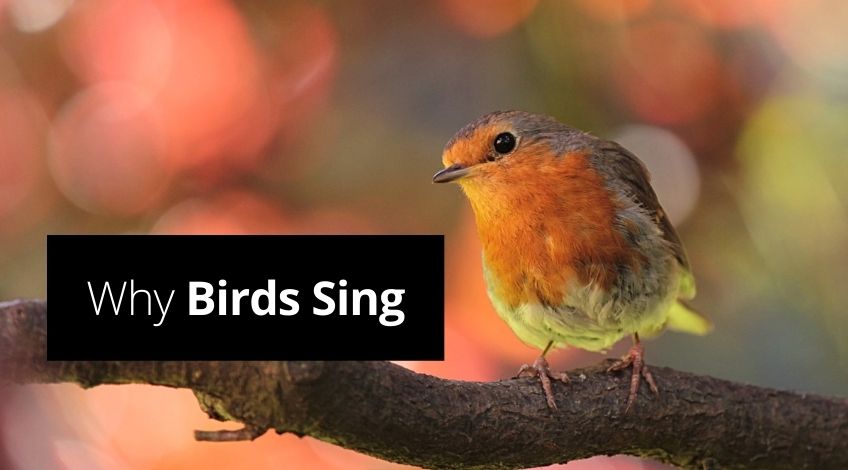 Why Do Birds Sing?

It seems like an easy question to answer really, doesn’t it? Birds sing for many reasons, and if you’ve ever listened to the dawn chorus at around 4 am during a particularly hot Summers night when sleep seems like a far distant memory you’ve probably asked yourself that question time and time again. Well here’s why birds sing early in the morning, it’s the males bragging how strong they are.

You see, early morning singing takes a lot of energy, as does nest building, attracting a mate and rearing the young, all while keeping other males who’d like a ready made family away. Singing in the early morning is the male bird’s way of saying “I’m the man! Keep away from me and mine”.

Why Do Birds Sing So Early In The Morning?

If you’re awake in the hour or so before dawn, and if you listen carefully, you’ll hear the pre-dawn chorus. Birds sing at this time because it’s too dark to hunt for food, and also it’s too dark to be hunted by predators. If you’ve ever wondered why it’s so loud, it’s because there’s less noise from us humans, and the air is thinner which allows sound to travel further and sound clearer.

Is There A Hierarchy To The Birdsong?

There most certainly is, birds start singing at different times of the morning. First up are the blackbirds, thrushes and robins. Then come the warblers, wrens and wood pigeons, and last but not least, are the sparrows, finches, blue tits and great tits.

There Are Different Songs Throughout The Day That Have Different Meanings

These range from friendly “hi, how are you?” songs to warning songs and cries for help. They can be categorized as:

How Do Birds Know What To Sing?

Interestingly, birdsong isn’t inherited, young fledglings learn how to sing from their parents. During their first few months they learn a sort of baby version of the adult song. It continues to develop into an adult song as they mature, reaching an adult song just as they reach breeding age.

How Many Songs Do Birds Sing?

This is dependent on species, sparrows for instance have just one simple song. Whereas nightingales and song thrushes have many different types of song. Other birds are experts at copying sounds of birds or even sounds of the city. Starlings are well known for this sort of mimicry. Jays can even imitate birds of prey like buzzards to frighten away any unwelcome visitors to their territory.

As birds are recognised by their song many will use it to signal to others of their own species that this territory belongs to me and I’m prepared to fight to keep it. They also use their song to attract a mate during breeding season.

If their song isn’t good enough, or strong enough, they can find themselves alone during the breeding season and their particular branch of the species could die out. So birdsong is an important part of a bird’s life.

Why Is Birdsong So Important To Birds?

Birdsong is used for different reasons, including:

So different birdsong can signify different things. They can be coded messages for friendly birds or threatening warnings to potential opponents. Or maybe they are showing off their superior songs. Maybe they are warning of imminent danger either physical or weather related. Or they could just be having fun.

When you hear birdsong from now on, you’ll certainly look at it in a different light than you would have  before you read this article.

Do birds sing because they are happy?

Birds sing for many reasons, from warnings, threats, showing off, asking for help, and many more. There is a recent theory that some birds do sing because they are happy.

Why do birds sing so early?

Birds sing early in the morning because it’s too dark to hunt food and any predatory birds in the area can’t see them because it’s too dark. They are also conveying the message that they are strong and fit, it’s cold and they not only have enough energy to have hunted for food yesterday and build a nest and keep warm all night but they have enough energy to sing as well.