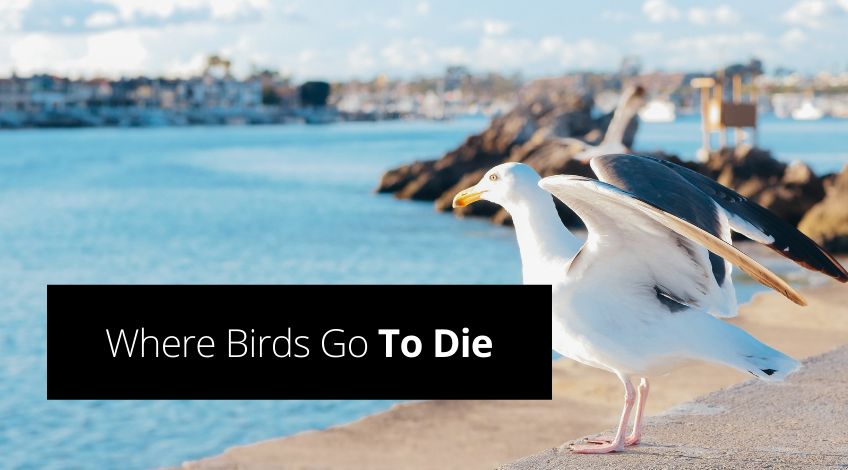 Where Do Birds Go To Die?

Considering the amount of birds flying around the UK it’s a wonder we don’t see any dead birds around. Well most get eaten by bigger birds or other predators, sadly there aren’t many birds that die of old age. Nature is a cruel place, it’s the survival of the fittest, and if you can’t keep up, you get left behind (or eaten).

Little birds eat smaller insects, small amphibians, slugs and worms, then they get eaten by bigger birds or other predators. This includes most British garden birds and it explains why they can breed at a young age, and why they have so many young. Sadly the mortality rate of garden birds is quite high; the average life expectancy of a robin is just over a year, while starlings typically live to be 2 ½ .

So in all reality, that robin that has always visited your garden probably isn’t the same one, but possibly a member of the same family. Generally speaking, the larger the bird, the longer it’s likely to live. The scientists do regular ringing of garden birds and use mist nets to catch them to check, and this is how they can make such accurate predictions on life expectancy.

Many Young Are Born But Not Many Reach Maturity

Garden birds produce many offspring; sadly the majority die before reaching their adulthood. Many of the younger birds and those that are weak will either contract disease or get captured by a predator, but will certainly not reach adulthood.

Like many other creatures in the wild, birds when they get sick, will go to out of the way, secluded spots to die. For example the woodpecker finds a hole in a tree to climb into. These ill birds hide because they don’t feel well, some recover and rejoin their flocks, but if they do die, they often don’t get found. If they do get found it’s often by a predator like foxes, rats or cats, or as their bodies are so small, they don’t take long to get eaten by insects.

If predators do find a dead or dying bird, they will usually take it back to feed their young which explains the lack of bird remains found in our gardens. It would be incredibly unusual to find a dead bird in your garden in much the same way as you wouldn’t very often find a dead mouse. As birds need to be composed of such light bones to be able to fly, their bodies decompose very quickly so there are often no remains left from a sick bird that has hidden somewhere like under a bush.

Polar bears’ usual hunting ground is the Arctic sea but as the Arctic warms, the bears have to move closer inland to find food. Once they stumble on a guillemots nest they will eat all of the eggs, and the parents too. They can then go from nest to nest and wipe out a complete flock of guillemots in a short time.

Where Do Seabirds Go To Die?

Firstly sick gulls wouldn’t be flying with the flock as gulls are a particularly competitive species of bird. They fight against healthy birds so a sick one hasn’t got a chance. Plus any sick bird is easy prey for predators, they have foxes to contend with on land and birds of prey at sea, plus there’s the likelihood of sharks and other ocean predators eating them in the sea.

When any birds feel sick, they will go somewhere away from the rest of the flock,they usually hide in secluded places but gulls and other seabirds are a bit short of secluded spots. They often land on the beach initially to rest, if this doesn’t make them feel any better, they just die. But beaches are full of scavengers, from foxes, rats, crabs, other birds even, and the feathers get washed out to sea on the next tide.

What Are The Causes Of Bird Die-Offs?

Possibly the only time you are likely to see any dead birds is after a bird die-off, these events are relatively rare and many have no scientific explanation yet discovered. But they do happen and sometimes there are reasons and these include:

What Are The Main Illnesses That Cause Mass Bird Die-Offs

The 3 illnesses listed above are severe bird illnesses that can cause a mass die-off in birds but what are the symptoms?

When birds catch avian ‘flu the symptoms include:

If you notice any of the above symptoms in pet birds or wild birds contact the authorities at once. This disease is a cross species disease – Which means it can pass from birds to humans.

Birds usually contract West Nile virus from the bite of an infected mosquito, but predatory birds (owls, eagles etc) or scavenger birds (crows, magpies etc) can contract it from dead or dying birds. The symptoms of West Nile virus include:

Many birds can get over West Nile virus if given the correct treatment, unfortunately this is unlikely to happen in the wild. There is no evidence of humans contracting West Nile Virus from infected birds. Humans tend to catch West Nile virus from being bitten by infected mosquitoes.

This disease mainly affects waterfowl but does cross over into land birds. The main symptom is paralysis of the legs, neck and wings. With the harder to spot swelling of the nictitating membrane- third eyelid (almost transparent). If a whole area of water (pond, lake or section of river) has a concentration of dead or paralysed water birds, it’s a pretty good assumption that they will have suffered from avian botulism. There are no recorded cases of humans catching avian botulism.

Why do you never see dead birds?

Most sick birds will go and find a secluded place to either recover or die, they are then usually found by predators (like foxes) or scavengers (like crows) and eaten. If they do remain hidden their lightweight bones will soon rot down.

Where do birds go when die?

Birds who feel unwell will seek out a secluded place to either recuperate or die.

How do most birds die?

Sadly most birds die from either illness or predator attack and not old age.

What happens to birds’ bodies when they die?

Most birds’ bodies are eaten by either predators (foxes etc) or scavengers (crows etc) or they disintegrate quickly due to their thin bones required for flying.