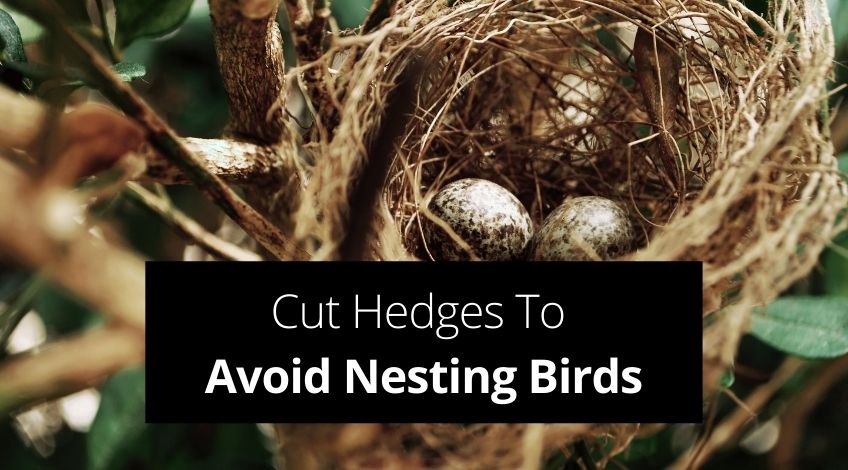 When To Cut Hedges To Avoid Nesting Birds

The usual time birds nest is between March and August, they usually nest in hedges because this is where they feel safest from predators. So before you start cutting back, or pruning your hedges, you should check to make sure there are no birds currently nesting in your hedges.

Surprisingly, there are a considerable amount of rules and regulations regarding hedges. For example, the height of a hedge has a restriction of 2 metres tall. Especially if it causes light loss to neighbouring properties.

However, under the wildlife and countryside act 1981,if a wild bird is either building or using a nest, any damage, however small, is an offence under the aforementioned act. If there are birds nesting in your hedge, no matter how tall or unruly it looks, you will have to hold back on pruning until after August. This ensures you are not in breach of the law and also that another generation of wild birds survives.

There is a time frame set out in British law when it is illegal to cut hedges. This is between the first of March and the thirty first of July. So it is actually illegal under UK law to cut hedges and bushes from 1 March until 31 July.  Be careful though, as many wild birds still have eggs and young in their nests way into August. In fact EU legislation bans hedge cutting until the first of September.

So under EU law farmers and landowners are prevented from pruning hedges from 1 March until 1 September to protect the wildlife.

All wild birds, their young, their eggs and any active nests are protected under official UK law.

It is an offence to intentionally damage a nest while it is being built, or it is in use.

Using a hedge cutter will almost definitely cause damage to nests or at the very least cause birds to desert them.

It’s Not Just The Birds

Under the same 1981 act, it is also illegal to intentionally kill, or injure, take, trade or possess any wild animal listed under schedule 5 of the act. This includes the following moths:

So, if there is even the slightest likelihood of one of these species living in your hedge, it should not be pruned until early August and then only cut a few areas back and leave the rest until later in the year, December and onwards is best to ensure any eggs laid late in the season that could affect the moths already dwindling population.

Many beetles and other insects plus other mammals are also covered by this legislation so it really is a good idea to check your hedges before getting the cutters out. This can of course cause some problems with certain types of plants used to make up hedging. For instance, conifer hedges should not be cut back after August as this will result in bare patches.

Depending what plants are used to create the hedges at the boundary of your property, they can grow quickly and overhang the street and pavement. These need to be trimmed regularly to avoid any legal action resulting from impeding pedestrian access. Even hedges that are regularly pruned can get larger over the years and cause some problems. If it is necessary to prune boundary hedges during nesting season, exercise great caution so as to not disturb any nesting birds.

The problem with even lightly cutting boundary hedges is that it is very easy to expose the nest to the ravages of the British weather. Birds tend to construct their nests in a position that is secure from the elements, including rain, and hidden from any predators. Even lightly pruning the tops of the hedges can cause gaps large enough to allow rain to get through.

This is an awkward problem to solve, as you cannot possibly know how the nest was constructed so keeping it waterproof is also impossible for you, unless you leave the cutters in the shed.

Here are a few tips to double check whether there are any active bird nests in your hedgerow.

How To Create A Bird Friendly Hedge In Your Garden

How Important To Wildlife Are Hedges?

It has been reported by the RSPB (Royal Society for the Protection of Birds) that hedges may house up to 80%  of our wild birds. Not just birds, but 50% of wild mammals, and up to 30% of butterflies. That’s without the frogs, toads and lizards that also use the cover of hedges to survive.

The thicker the hedgerow is, the more wildlife it can support. Also it’s not always a good idea to remove dead bushes, as many birds nest in the dead stems of hedgerow plants. Dead wood is also a good source of insect life which is food for a large variety of birds. So the more varied and mixed the shrubs that make up a hedgerow, the more birds and wildlife you will attract to your garden.

When can you cut hedges legally?

What months can you cut hedges?

The safest time to cut hedges is as late in the year as possible. From the end of September through until the end of February is best as it doesn’t break any statutory laws to do with wild birds nesting.

What time of year do birds nest in hedges?

Birds usually make their nests in March and are rearing their young until around the end of August.

Is it against the law to cut hedges in nesting season?

It is against the law to cut hedges where birds are nesting during nesting season. But if you are 100% sure there are no birds nests in the hedges it is ok to cut the hedges.

Can you trim hedges in summer?

You can trim hedges in Summer but only if you are absolutely certain there are no birds nesting there at all. If there are birds nesting in your hedges then you cannot trim them.

Do birds nest in leylandii?

Many birds take advantage of leylandii to build their nests and rear their young.