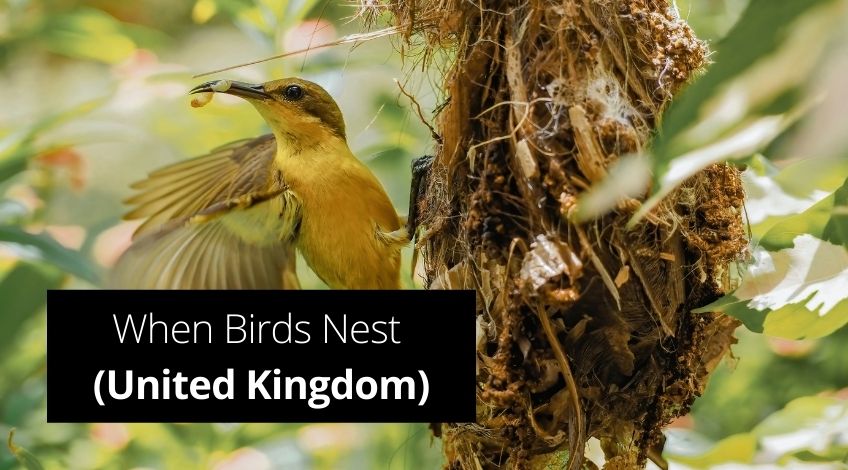 When Do Birds Nest? (United Kingdom)

The arrival of Spring in the UK coincides with the UK wild birds nesting period, having said that, there are many birds that start nesting earlier than Spring in the United Kingdom. Plus we have wood pigeons here that nest all year round.

According to Natural England the UK bird nesting season starts in February and runs through to August, with the busiest period from March to July. They also say that some birds start earlier than February and they also say others nest all year round.

The British Trust for Ornithology  reports that the nesting season is changing due to climate change, they say the nesting season is now starting 30 days earlier than it did in the 1960s. This wouldn’t be a problem if the rest of nature followed suit, but many of the plants and insects that wild birds feed on do not emerge at that same time -which is 30 days later than the birds are starting to nest.

If the birds start their nesting before the emergence of their food there will of course be a problem. Thankfully due to climatic conditions the plants and insects almost started to emerge a month earlier too so the problem was averted. We just have to hope that this synchronisation continues.

Which Birds Start Nesting First In The UK?

Generally, the first birds nesting in the UK are the crossbills. A bird found mainly in Scotland, the crossbill regularly nests in January, which given they are in the North of the British Isles would seem like completely the wrong time to be raising chicks. It seems to work well for them though so obviously their food sources are to be found in Scotland in January too.

In February long-tailed tits, long-eared owls, herons and ravens start to nest too. Followed in March by robins and blackbirds being the first types of common garden birds to start nesting.

Why Do Birds Nest So Early?

Most birds’ whole lives are governed by food, take the crossbill for example, they feed on the seeds of conifer trees, which, using their specially adapted beaks they can easily extract from pine cones. The seeds are readily available in January so that’s when they start to nest.

Blackbirds feed mainly on worms which are far easier to extract from the softer, damp Winter soil than hard baked Summer or even Spring ground.

Owls feed their offspring on small mammals, having nested early they can take advantage of the shorter grass and fewer plants in the undergrowth to catch their prey easily. This allows them to comfortably feed both themselves and their chicks without expending too much energy on the hunt for food.

Pigeons find it easy to find food as they eat almost anything and are therefore capable of nesting all year round.

The nest of the long-tailed tit is so elaborate that it takes ages to build so even though nest building starts in February, it’s usually April before they lay their first eggs. Other birds including the grey heron don’t need to build a nest, they just repair last year’s nest. They need to get a head start on other birds though. Grey heron chicks take around 8 weeks to fledge so they need the early start or there wouldn’t be enough comfortable weather to teach the young how and where to hunt.

Other birds that stay with the same partner all of their lives, like rooks, don’t have to take time finding a mate, so they can start their nesting in February.

Different types of birds start nesting at different times of the year, but even within the same species, older birds will start nesting sooner than younger birds. These older, more experienced birds, will take less time finding nesting sites, materials and finding a mate. As they start earlier, these older birds have enough time to raise at least two, or even three broods in one season.

Which Birds Start Nesting The Latest?

There are two groups of birds that tend to nest later than the rest of the birds that nest in the UK. They are seed eaters like finches who hold back on their nesting activities until they can be sure of a decent supply of food for their young.

The other group are the migratory birds that don’t arrive until April or May and start nesting almost straight away. Birds like swallows, swifts and martins.

The very best way to help nesting birds is to leave them alone. It is a criminal offence in the UK to knowingly damage or destroy  an occupied bird’s nest. Occupied doesn’t necessarily mean with eggs or chicks in either, if you disturb a nest that’s being built, that counts as occupied. During nesting season you should:

When Do Birds Stop Nesting?

Most garden birds in the UK are usually finished raising their last brood by the end of August we say usually because in mild Autumns birds can go on to raise another brood. This will mean it will be late October before birds have stopped nesting.

Wood pigeons can breed all through the year so in effect they never stop nesting, but pigeons aside, most other birds are finished by October at the latest.

What time of year do birds stop nesting?

The official bird nesting season is between February to August, but many birds don’t finish nesting until October.

Is it illegal to disturb nesting birds in the UK?

It is illegal to knowingly disturb nesting birds in the UK under the wildlife and countryside act 1981.

Can you destroy a pigeon nest in the UK?

You cannot destroy a pigeon’s nest in the UK; it is covered by the wildlife and countryside act 1981.