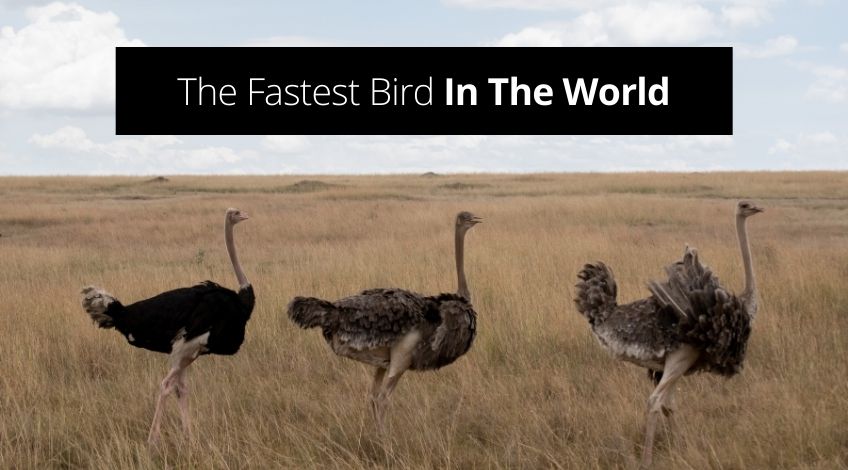 What Is The Fastest Bird In The World?

For many years the swift has been considered to be the fastest bird in the world, and in many places, still is. It all depends on how you record flight. We’ve looked at the top scientific data and have concluded the following results.

The Fastest Bird On Two Legs

The title for the fastest bird on two legs goes to the Ostrich which can run at an impressive speed of 45 MPH (72KPH) with short bursts of more than 60 MPH ( 95 KPH) and strides of around 12 feet (3.5 M). The ostrich is capable of maintaining speeds of 30 MPH (48 KPH) for more than 30 minutes at a time.

Scientists use doppler radar to track the speeds of birds in flight and have come up with some interesting results. The average cruising speed for birds is around 25 miles per hour (40KPH) but some ducks and other waterbirds can manage at least twice this fast. And it’s not just waterfowl either, racing pigeons have also clocked up speeds in excess of 50MPH (80KPH).

Other speed inducing factors include headwinds, tailwinds, and whether the bird is being chased or chasing others. During their display flights swifts have been recorded flying at speeds of 69.3 MPH(111.5KPH). But that was in display flights, their usual cruising speed is around the 25MPH (40KPH) common to many birds.

The fastest bird in steady, level flight is the Eider duck. These birds fly at around 47.2 MPH(76KPH) due to the sheer physical strength of their wing muscles. These muscles have been developed due to the birds high weight to wing ratio, they need as much power as possible to lift their relatively heavy bodies with their relatively small wings.

As Eiders live on the North-east coast of the UK they need all the strength their wings can produce to fly through the harsh, strong North winds. However they’re not the only birds capable of such fast flight, pigeons, certain wading birds and many waterfowl can all fly in excess of 40MPH (64KPH).

The Fastest Bird When Hunting

This title goes to the Peregrine Falcon, when hunting for their prey Peregrine’s use a specific hunting technique known as the stoop. They fly high above their prey and then close their wings and go into a downward dive. Due to the aerodynamic shape they adopt, their prey are often dead before they even realise they’re being hunted.

During a stoop a Peregrine can reach speeds of up to 200MPH( 321KPH) of course this stoop is assisted by gravity and in regular flight the Peregrine can only average around 40MPH(64KPH).

Below we’ve listed the top 10 birds in the world by their speeds. With thanks to wikipedia[1]

This magnificent bird is found on every continent on the planet with the exception of Antarctica. Peregrine falcons are known in North America as duck hawks, and these highly migratory birds have excellent homing instincts that bring them back to the same breeding grounds every year. Peregrine’s mate for life and raise their young together often nesting on tall buildings and narrow ledges of high cliffs.

Their nests are called scrapes and when diving after prey they are almost silent.They have a body length of between 12 to 24 inches (30 to 60 cm) and a wingspan of very nearly 4 foot  (120 cm). The average weight of a female peregrine is around 1.8 lb (0.81 kg) with the male weighing around 1.5 lb (0.68 kg). The male and female Peregrine look very similar with similar markings.

The fastest recorded dive of a Peregrine is 242 MPH (389 KPH) which makes it the fastest animal in the world. When they come into contact with their prey, Peregrine’s usually target a wing or other limb to avoid causing any damage to themselves. They prefer hunting over open areas where they can spot prey from afar and then they fly high above to swoop down at speed to make their kill.

Peregrine’s can migrate over 10,000 miles (16093km) in a single year, returning to the exact same breeding ground every year.

What Do Peregrine Falcons Eat?

Peregrine’s eat medium sized birds like pigeons, ducks, doves and many waterfowl and they’re not bothered by size, Peregrine’s have been known to kill birds far larger than themselves. They also eat wading birds and songbirds. In fact worldwide they prey on over 2000 bird species.

What Is The Largest Threat To Peregrine’s?

Unlike many species that have become prey to property developers and other human development, the Peregrine has proved to be adaptable in it’s nesting techniques in urban and suburban environments.

The female Peregrine lays between 3 to 4 eggs and both parents tend the nest and incubate the eggs for around 4 weeks. The chicks which are called eyases begin flying lessons at around 45 days old. They have a life expectancy of 7 to 15 years with some living for 20 years.

What are the top 3 fastest birds?

The top 3 fastest birds in flight are the Peregrine falcon, the Golden eagle and the White-throated needletail.

What is the fastest bird in the world?

The fastest bird in the world is the Peregrine falcon.

Is a peregrine falcon faster than a cheetah?

The Peregrine falcon is the fastest animal in the world flying at over 200 mph whereas a Cheetah can run at around 70 mph.