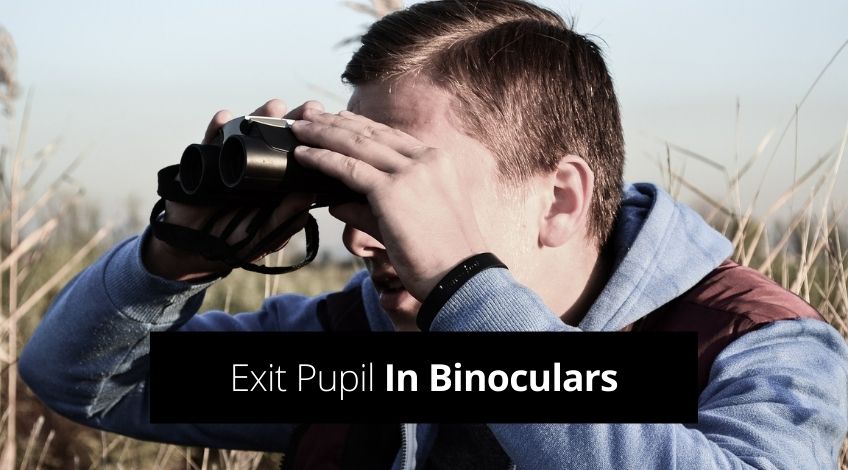 What Is Exit Pupil In Binoculars?

The short answer is, the exit pupil is the circle of light that you can see when you hold binoculars at arms length and look through the objective lens. Of course there’s a whole lot more to it than that, but that gives you something to think about as we fill in the details. The exit pupil is an important yet, often overlooked feature on a pair of binoculars.

We all look for the obvious features like the magnification level and the size of the objective lens diameter and even the field of view, but who thinks about the exit pupil? Yet it’s the only way light has of entering the binocular lenses. And therefore, the only way to illuminate the image we can see through the binoculars. Under certain conditions the size of the exit pupil could be the difference between seeing anything at all through the binoculars or not.

What Has The Exit Pupil To Do With The Human Pupil?

The human pupil, our pupil, reacts with the light, in bright sunlight our pupils shrink to prevent too much light from entering our eyes. As darkness falls, our pupils dilate to allow more light to enter our eyes so we can still see in darker conditions. There’s an average rate at which the human eyes’ pupil size decreases with age.

An average human pupil at rest in dull conditions will be around 7mm at the age of 30 years old. The pupil size decreases by around one mm every decade so at 40 it’s 6mm and so on until we reach the age of 80 when it settles at around 2 to 2.5mm. In bright conditions our pupils are around 2.5 to 3mm, but as darkness falls our pupils increase in size, to the level quoted above depending on our age.

To see clearly through binoculars we need enough light to hit our pupil to illuminate the image we’re looking at.This means we need an exit pupil of as close to our own pupil size to use binoculars correctly, especially in low light conditions. The exit pupil isn’t always quoted in the specs when buying binoculars, but it’s easy to calculate with just one simple formula.

How To Calculate The Exit Pupil On Binoculars

Take as an example a pair of binoculars with the following numbers 7×50 That’s a magnification of 7 times (7x) with an objective lens diameter of 50mm. Using our exit pupil formula, we get;

What’s The Connection Between Exit Pupil And Eye Relief?

There is a connection between exit pupil and eye relief but before we get into that, let’s explain what eye relief means.

Eye relief is the perfect distance between the outer surface of the ocular lens (the lens closest to your eye) and your eye and still see the full field of view. The eye relief is where all of the light from the exit pupil converges into focus and forms the complete image. The average eye relief is around 12 to 16mm but if you wear glasses you’ll probably need what’s known as long eye relief.

The Perfect Spot For Full FoV

As we age, our pupils dilate less in dark conditions (due to our pupils shrinking by one mm per decade) this means as we age, compact binoculars like 8×32 seem to be the perfect fit for older people. By the time we reach 50 years of age, our pupil size will be around the 5mm mark, which means binoculars with a 5mm exit pupil, that have a smaller objective lens diameter and a smaller exit pupil will present us with an image just as bright as larger, heavier and often more expensive binoculars.

What Does Exit Pupil Mean To Stargazers That Use Binoculars?

This is where things can get slightly confusing, so bear with us, we’ve so far discovered that the exit pupil is determined by the relationship between the magnification and the objective lens diameter. So when we say a certain pair of binoculars has a small exit pupil, we’re really saying they have a higher magnification.

But does higher magnification create a dimmer image? Take for example the Andromeda galaxy. When looking at galaxies or even nebulae, there are no binoculars that will make the image brighter. Easier to see yes, but brighter, no. What’s the reason for that? The answer is, magnification.

Most stargazers avoid binoculars with big exit pupils because they show the background at its highest brightness. However, using higher magnification causes both the galaxy and the background sky to be dimmed to the same amount. In other words, the contrast between the galaxy and the surrounding sky remains the same. The darker background sky and the larger scale of the image, appears to improve the contrast, even if galaxy brightness in relation to the surrounding sky hasn’t changed.

When Talking about looking at stars through binocular lenses, it’s a different story. When we look at stars using higher magnification (thus smaller exit pupils) produces a dimmer background view but the brightness of the star is fixed by the diameter of the objective lens. Put clearly, when looking at stars, increased magnification dims the surrounding sky but not the star itself.

How Does This Work?

It’s because there isn’t a high enough magnification to make them appear any bigger. All of the stars’ light remains concentrated into a pin point. By magnifying the galaxy, it appears to increase in size and the light it produces spreads over a wider area. Due to this boost in contrast, as the magnification increases, fainter, duller stars become easier to see.

For Stargazing A Smaller Exit Pupil Is Better

Smaller exit pupils give better views of galaxies due to the increased darkness of the background sky. That darker background gives stars an improved contrast, with larger looking fainter stars appearing larger and easier to see. This is exactly how telescopes operate too.

How Does Exit Pupil Affect Vision With Binoculars?

To sum all of this up, the human pupil is around 7mm in the dark and around 2mm in bright daylight. Binoculars with an exit pupil of more than 2mm during daylight, will show no dark images, but using binoculars with a larger exit pupil during the day won’t make the images appear any brighter.

However, it’s at night when it all changes, using binoculars with a small exit pupil in the darkening conditions, will result in a dull image. In fact under such conditions you’ll probably see more with the naked eye. So as natural light fades, you’ll need to use binoculars with a larger exit pupil to make out any detail of the object you’re trying to view.

What is a good exit pupil for binoculars?

This depends on your age, because our pupils start at around 7mm at the age of 30 and decrease in size every decade so at age 40 the pupils will be 6mm etc. Plus pupil sizes vary from daytime to nighttime, with daytime diameters of around 2 to 3mm. So a good exit pupil for daytime use will be 3mm or above. At dusk more like 5 to 6mm will be best.

Why is exit pupil important?

Exit pupil is important because it dictates the amount of light that can enter our eyes to illuminate the image we can see through the binocular lens.

How do you find the exit pupil?

To find the exit pupil divide the objective lens diameter by the magnification value. For example 7×50 binoculars will have an exit pupil of 7.14mm because 50 ÷ 7 = 7.14.