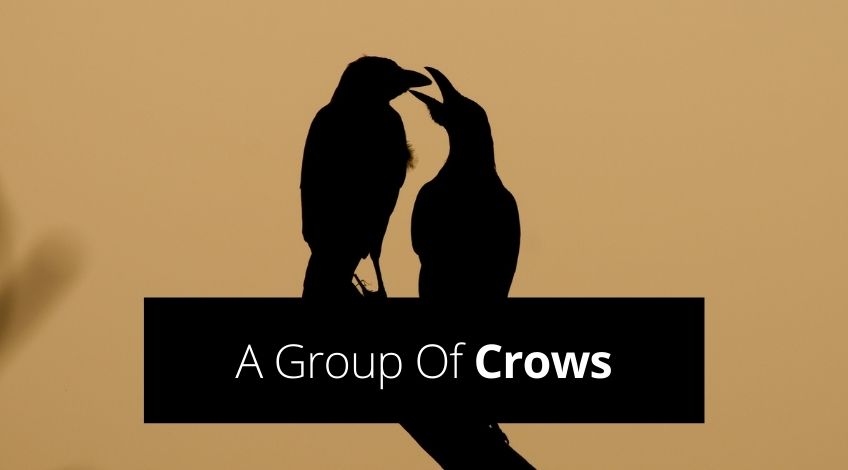 What Do You Call A Group Of Crows? And Why?

Why Are a Group Of Crows Called A Murder?

There are many reasons why a crows are called a murder, most of them can be traced back to those peasants again. For example:

Names Given To Other Types Of Birds

But the idea of giving various animal groups poetic or descriptive names comes from the English nobility from the middle ages. Other such names include:

Many of these names are remembered because they were part of the aristocracy’s education for etiquette. Published in handbooks designed to identify the aristocrats from the great unwashed.

Some of these names are derived from watching the birds, like “a descent of woodpeckers’ ‘ was probably from their habit of descending from great heights to swoop on an insect. Many have more than one name like the crow, take the goose for example. Geese gathered together on land are a gaggle but the same group of geese in the water are a plump, or if they are flying they are called a skein, a wedge, a team or a nide.

One of the names for a group of geese flying is a skein, which seems to be a variation or an abbreviation of the old French word for a hank of yarn, “escaigne”. This perfectly describes the flight pattern of the geese when they’re flying in a V formation (which is the formation used by many birds so the ones towards the middle can have a semi nap on long journeys).

Back To The Much Misunderstood Crow

Crows have had a bad name throughout history, with one type of crow named the “carrion crow” Carrion literally means “the decaying flesh of dead animals” and yet these birds are incredibly intelligent and in reality worthy of respect. There have been a number of scientific experiments done with crows to see just how intelligent they are, and they came up with some surprising results.

Back in 2002 at Oxford university, a group of scientists gathered around to watch Betty pick up a piece of wire in her cage, bend one end against an object left close by, turning the wire into a hook. She then took the hook in her beak, and picked up a small dish of meat (Pigs heart) from inside a plastic length of tubing, and transferred it to her cage for lunch.

All of the gathered group of scientists and most of the world’s press were so amazed that they called Betty the cleverest crow ever, or words to that effect. But it turns out that as clever as Betty was, she was nothing too spectacular in the world of crows.

In 2002 when Betty performed her famous stunt, she was considered to be one of a kind, but a later study carried out in Canada, discovered that the New Caledonian crows often make tools from sticks and twigs when foraging for food. This study has prompted scientists to study other members of the corvid family. Corvids include crows, ravens, jackdaws, rooks, magpies, jays and many more.

It is well known that primates ranging from apes to humans have a part of their brains called the neocortex and it is this that aids us to make decisions on how to solve problems. Corvids don’t have a neocortex, what they do have is a group of neurons that allow them to think in a way to solve problems.

But that’s not all, they can recognise people that have been threatening to them, and others who have shown a particular kindness towards them. Plus they communicate with each other and going back to the New Caledonian study, the crows search for a particular plant to make their hooked tools from. Even when the scientists  hid those stems from the crows, they rooted through the undergrowth until they found them.

What Do The New Caledonian Crows Use Their Tools For?

The scientists studying the New Caledonian crows have camera footage of the crows bending the plant stem, and then using them to hook insects out of holes in tree trunks. They even made obstacle courses for the crows, a course of 8 separate steps were created for the crows to solve to get a reward. The particular crow that completed the course had done each one of the tasks before singly, but not all 8 at once like this time.

This gives rise for us to think the crow can to some extent plan ahead, which up until this time was considered a thing unique to humans and a few other primates from earlier scientific experiments. So never underestimate the intelligence of the visitors to your garden.

What do you call a group of ravens?

A group of ravens are called either an unkindness or a conspiracy both are listed from the books from the middle ages.

What is a gathering of crows called?

A gathering of crows has a few names all dating from the medieval period they are: a murder, a mob or a horde.

What do you call a group of magpies?

A group of magpies are called a mischief according to books from the middle ages.

What is a group of hummingbirds called?

A group of hummingbirds has many names, a herd, a glittering, a shimmer, a tune, a bouquet, a hover and a charm.