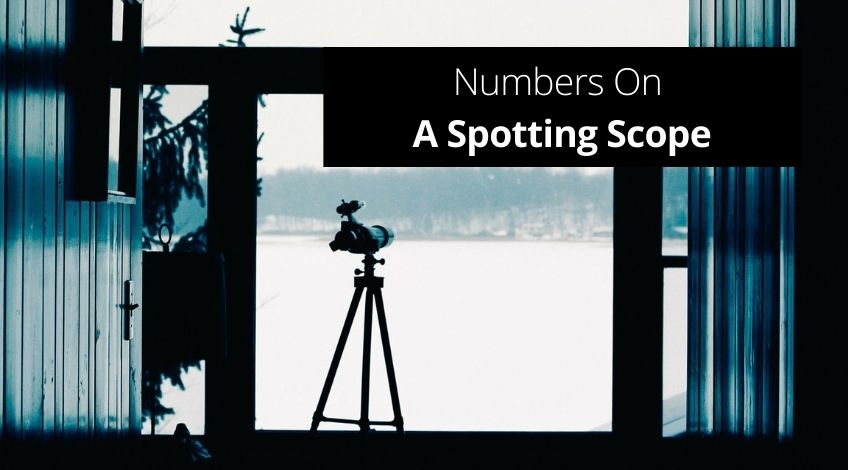 What Do The Numbers Mean On A Spotting Scope?

If you’ve been using binoculars for a while and want to take your hobby to the next level, then a spotting scope is the obvious next step. Or, if you’re just interested in seeing faraway objects up close and have heard that a spotting scope is better than using a pair of binoculars, read on to find out all you need to know to make the best choice for you.

It can all seem a bit confusing, there are so many terms to try to get your head around, and numbers what does it all mean? Don’t worry, because by the time you finish reading this article you’ll be able to choose the perfect scope for your requirements.

What Do the Numbers Mean on Spotting Scopes?

It all seems like a foreign language at first but once you understand the terminology, it all makes perfect sense. So let’s get straight into finding out what those numbers mean.

These numbers indicate the level of magnification and the diameter of the objective lens in millimeters. Using the X as the splitting point, we start with 20-60 this is the amount of magnification of the scope. The first number tells us the starting level of magnification is 20 times, which means that everything seen through the lens will appear 20 times larger than with the naked eye. Then there’s the hyphen followed by the 60, this tells us that this particular scope has a zoom of up to 60 times, making the image appear 60 times larger than with the naked eye. The X just indicates “times” so we now know our scope has a magnification of 20 times which can be adjusted to 60 times.

It doesn’t matter to the formula, it still works in the same way, the number up to and including the X indicates the level of magnification and the numbers after the X indicate the diameter of the objective lens. But in this case there’s no hyphen, which tells us that there’s no zoom feature on this scope, just a fixed magnification of 4 times. The number after the X is still the objective lens diameter and it’s always in millimeters, in this case 32mm. Some spotting scopes might just have;

This tells us that this scope has a fixed magnification of 6 times, which means the objects viewed through that scope will appear 6 times larger than with the naked eye. It gives us no indication of the objective lens diameter.

Why Is The Objective Lens Size Important?

We’ve already alluded to this, but it is an important part of any spotting scope (or binoculars for that matter). The only way any light can enter the spotting scope is through the objective lens, so the larger the better. The only way to see a clear, crisp, sharp image full of detail is if it is a bright image. As the objective lens size increases, so does the overall weight of the scope because the optics are heavy.

Spotting scopes generally have larger objective lens sizes than binoculars which means one of two things;

The magnification and the objective lens diameter are the two main numbers we need to identify, but there are other numbers that you’ll need to understand before investing in a spotting scope. They include;

The Field Of View

The wider the field of view (FoV) is, the easier it is to follow a moving object like a bird in flight for example. The FoV is the area you can see from left to right at a set distance. Say 105m@1000m this means looking through the lens you’ll be able to see a width of 105 metres at 1000 metres in front of you. Of course as the magnification increases, the FoV narrows because as you close-in on an object you lose all the peripheral views.

This is the distance you need your eye to be from the lens to see the full image. The average eye relief for spotting scopes is around 17mm, which is perfect for most people. If you wear glasses however, you might need to look for a scope that has long eye relief which allows extra space to accommodate your glasses while still seeing the full image. Long eye relief is anywhere up to 24mm.

The eye cup is the rubber or soft plastic edge to the eyepiece. The eye cup is adjustable by either twisting or folding up or down. This allows some adjustment for eye relief but usually not enough to clear the average size glasses.

This refers to the beam of light that enters the scope through the objective lens. It’s quite an important feature because only the light that covers our own pupil shows us the image. The human pupil has a diameter of around 2 to 3mm in bright sunlight and dilates to between 4 to 5mm as the light fades.  Not all scopes have the exit pupil included in the specs but it’s an easy one to calculate just divide the diameter of the objective lens by the magnification to determine the exit pupil.

This is the overall length from top to bottom, sometimes quoted as dimensions and usually in centimetres.

This will be the overall weight of the scope and is usually depicted in kilos or parts of a kilo. It’s important to know the weight of the spotting scope, not only because you’ll have to carry it around all day, but also because you’ll need to purchase a tripod substantial enough to support the scope. Generally the larger the objective lens diameter, the heavier the scope will be.

Why Do You Need A Tripod?

It’s not just because spotting scopes are quite heavy that you’ll need a tripod to support it. It’s mainly because the high magnification will magnify any slight shake you have when holding the scope. It’s not a problem, we all shake slightly when holding any object for extended periods of time.

It’s just we don’t usually notice it, but when trying to look at an object at, at least 20x magnification that shake translates to a blurred image. The only workable solution for this is a tripod to support the weight.

Some scopes come supplied with tripods but check to see if yours does and also if it’s of a sufficient size for your needs.

Other Important Features About Spotting Scopes

That’s all of the basics covered, but there are a few more factors that can be the difference between a good scope and an excellent scope. Let’s have a look at some of the more important features.

The glass used for the lenses on a spotting scope should be either HD (high density) or ED (extra-low dispersion) glass. This ensures clarity of images at high magnification and really is noticeable in low-light conditions. It also prevents colour fringing or haloing and improves light transmission.

Look for FMC or fully multi-coated lenses as this means that all of the lenses inside and out have been coated in multiple layers of glare reducing, improved light transmission coatings.

Roof prism spotting scopes are smaller, more compact designs but they are far more expensive, not so efficient (with a 12 to 15% light loss) and carry less options for additions.

Does A Spotting Scope Need To Be Waterproof?

As we live on a planet consisting of over 70% water, and in a country where the seasons can be distinguished by the temperature of the rain, we recommend buying a spotting scope that is waterproof. There is an industry coding system just for waterproofing which covers everything from electrical appliances to torches and optical equipment. It can be a confusing document but suffice it to say that any spotting scope with a code of IPX6 will withstand any rain the Great British weather can send its way and IPX7 can withstand 30 minutes in a metre of water without getting any damage.

Sudden temperature changes like getting out of a warm car and standing in a cold early morning field, can cause optical equipment to fog up. To combat this the scope manufacturers remove all of the air from the scope and replace it with either nitrogen or argon gas. These gasses contain no moisture so they cannot react to fluctuations in temperature, which means the scope won’t fog up.

As the gas is sealed in and cannot escape, so nothing else can enter either. Which means no dust, no mould spores and no microbial debris.

Most decent spotting scopes come fitted with a protective outer coating, either rubber or polycarbonate that will protect your scope from accidental damage.

This is the nearest to an object you can be and see it clearly through the spotting scope lens. Not really an essential feature, but nice to have if you’re planning on digiscoping and attaching a camera to your scope. A close focus of 7 metres is considered to be exceptionally good for a spotting scope.

Of course if you plan on laying down to watch game or birds etc, then a straight scope will probably suit you better.

20-60  means the spotting scope has a zoom magnification of 20 to 60 times with an objective lens diameter of 60mm.

Can you take pictures with a spotting scope?

Most spotting scopes make adaptors that allow you to fit certain cameras to the scope.

Can a spotting scope be used for stargazing?

Can you use a spotting scope without a tripod?

Whilst it is possible to use a spotting scope without a tripod, you will probably see a blurred image due to the magnification of the natural human shake. It is best to use a tripod to support a spotting scope to ensure a clear, crisp, sharp image.