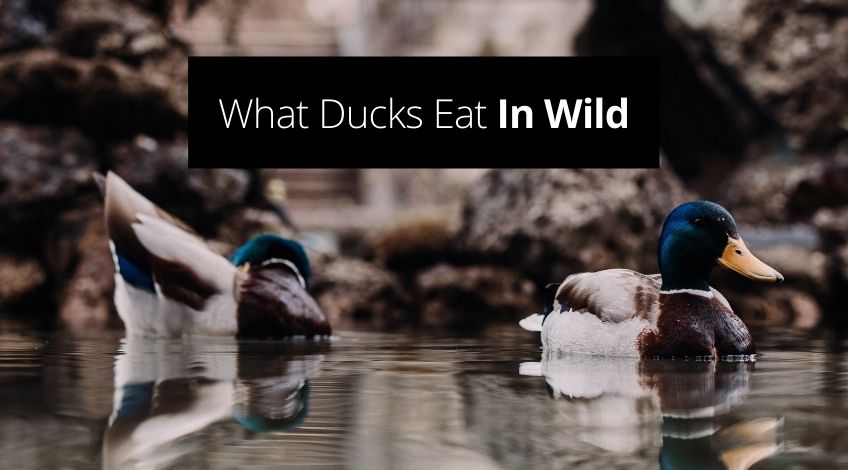 What Do Ducks Eat In Wild? Plus What To Feed Them

The difference between what ducks eat in the wild, and what they get fed in parks and ponds is not only huge. But it’s also the question of a major scientific study and argument (one faction is all for banning the feeding of ducks in ponds by the general public. They say ducks should only be fed by a park official who understands the ducks dietary needs to remain healthy.

This is because ducks in ponds in our towns and cities are fed too much bread, and bread alone is not a healthy diet. Yes we all need carbohydrates, ducks included but not as our only source of food. And that’s the problem, there’s no control on the amount of people feeding bread to the ducks. Which leads to bad health in ducks and many more health problems besides.

Why Should You Not Feed Bread To The Ducks On Your Local Pond?

As we said above, too much bread is bad for ducks and we have no control on how much bread the ducks are consuming. What we do know is that in England and Wales visitors to local parks feed wild ducks around 3 and a half million loaves of bread per year. The ducks are happy to eat the bread and in many cases they are a little too eager and will even beg for bread,

Firstly ducks are wild animals, and in the wild they have to forage for food. This keeps them alert, fit and it keeps their body weight at a healthy level. As they forage they are eating a varied and balanced diet that helps them maintain their natural waterproof feathers, keeps their eyesight in perfect condition, and their environment will not get over crowded with more wildfowl than it can support naturally.

Feeding ducks bread is popular with young children, because the ducks readily eat it and will often leave the water and beg for more bread. Whilst this keeps the kids happy, it is actually leading the ducks and other waterfowl down the path to destruction. Here’s why:

What Do Ducks Eat In The Wild?

Wild ducks and other waterfowl feed on a variety of food that is readily available in their habitat, they don’t need 3.5 million loaves of bread per year to supplement their diet. During the course of an average day, ducks will eat:

You’ve probably seen ducks, swans and other waterfowl ducking under the water and feeding from the bottom. This is how they are supposed to live, it’s their natural way to feed and it creates a balanced, healthy diet. So if you want to take your children down to the local pond to feed the ducks, that’s great. As long as you feed them the right food, it’s also a great opportunity to educate your children on what ducks should be fed and the reasons why bread’s not a good food for ducks.

What Should You Feed To Ducks?

There are some foods that can be given to ducks and other waterfowl that are probably already in your food cupboards and others that can easily be obtained from pet food stores or online suppliers. They include:

What Should You Not Feed To Ducks?

There are many foodstuffs that should not be fed to ducks and other waterfowl these include:

How To Feed Wild Ducks Responsibly

Hopefully by now, you are a lot more knowledgeable about what to and what not to feed to wild ducks and other wildfowl. So now let’s go through the right way to feed the ducks.

Be Safe Near The Water’s Edge

It sounds obvious but if you’re near water, you’re potentially in danger, especially if you’ve brought children with you. You need to keep an eye on the children at all times whilst distributing the food to excited children and hungry ducks.

Only Feed Ducks Where You Are Permitted To

Before you start with the duck feed, take a good look for any signs from the pond’s owner specifically about feeding the ducks. There’s a strong possibility of there being a sign about not feeding the ducks bread, but hopefully. If you’ve got this far. You weren’t going to feed them bread anyway.

Only Feed The Ducks The Correct Food

Don’t feed them anything that’s bad for them, only give the ducks healthy foods as listed above. We won’t go over it all again, you should know what to feed them by now.

Don’t Encourage The Ducks And Other Wildfowl To Fight

If there are others feeding the ducks, try to find a space that is uncrowded and start feeding there. Some of the stragglers will be grateful for the easy access to food. Feed sparingly, don’t keep throwing the food into the water (or on the surrounding land) if it is not being eaten. Also try to remember, ducks are natural foragers, spoiling them once in a while can lead to them losing their ability to forage.

Try To Encourage The Ducks To Stay In The Water

While they remain in the water, there is less chance of them getting attacked by predators. Also inquisitive dogs can cause distress to wildfowl. You can’t stop the birds from leaving the water, but you can encourage them to stay in the water by scattering their food onto the water.

You already know this, but litter is a big problem, especially for wildlife. If you took your duck food to the pond in plastic bags or containers, take them home and recycle them responsibly.

What foods are poisonous to ducks?

Foods that are poisonous to ducks include: chocolate, avocados, dried or uncooked beans, onions,caffeine, potatoes, tomatoes, aubergines, spinach, and any citrus fruits, like oranges, tangerines, grapefruits and lemons.

Should I feed wild ducks?

In most cases it is unnecessary to feed wild ducks as they can usually find enough food through foraging.

As long as they are salt free, ducks can eat canned peas.

Ducks do eat small fish in the wild.