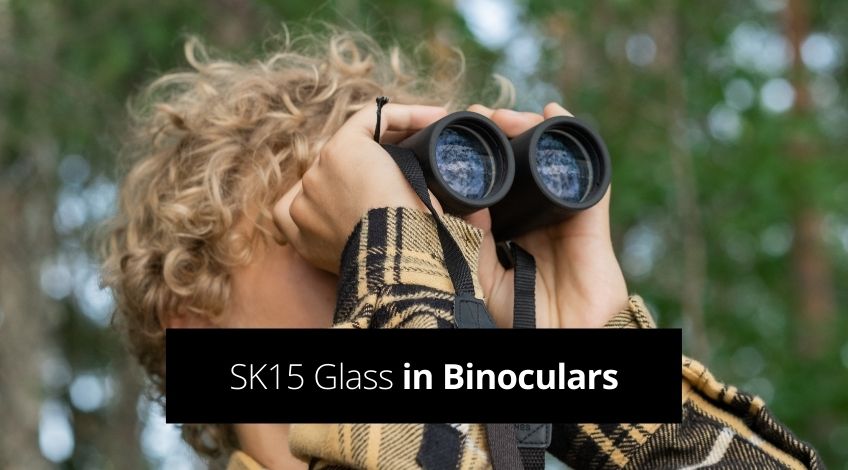 What Is SK15 Glass? (in binoculars)

If you have recently purchased a pair of binoculars and have noticed SK15 in reference to the prisms and you’re curious to know more about it. Keep reading. This article will tell you all you need to know about binocular prisms and in particular, prisms made from SK15 glass.

The reality is you don’t need to know how your new binoculars work to see far off images close up. As long as the image you can see is clear, sharp and fully in focus the binoculars are working correctly. But if you are intrigued by that SK15 tag, we’ll tell you all we can in the following paragraphs.

There are three types of glass used to make prisms for the binocular industry which are;

SK15 glass is usually used in conjunction with one of the other two types of glass used for prisms to create the best of both worlds.

The name is derived from Baritleichkron which is a Barium Crown glass, and prisms made from BAK-4 are considered to be the best type of prism used for binoculars. They have the least imperfections which leads to a higher light transmission, which gives a clearer, brighter image. There is also another variation of BAK-4 which is found in Chinese binoculars which is of inferior quality to Barium Crown as it is only a phosphate crown. The phosphate crown contains more imperfections than the barium crown which means a lower light transmission rate.

Prisms made from BK-7 glass tend to be used in cheaper binoculars. That doesn’t mean they are of poor quality, just that they contain more imperfections than BAK-4 glass. BK-7 is still high quality precision optical glass just slightly lower than BAK-4.

If you refer to the following chart it is easy to see that SK15 glass has a higher refractive index than BAK-4 and BK-7 and a lower dispersion rate than BAK-4. This allows manufacturers to make more compact binoculars with a shorter body length using SK15 glass compared to BK-7.

The Abbe number refers to the dispersion level of the glass, the higher the number the lower the light dispersion. The higher the refractive index allows for a steeper light cone, enabling the production of more compact binoculars without losing any optical quality.

SK15 prisms minimise the undesirable internal reflections to give a clearer image with a better contrast.

The way binoculars are constructed is basically two telescopes strapped together side by side so that both eyes see a magnified image. OK, that’s a simplified explanation but basically that’s what they are. However, the image you see through a telescope is upside down, the prisms are responsible for turning the image the right way up.

What Is A Prism?

In the most simple terms ever, a prism is a piece of glass (or other transparent substance) that has highly polished faces. The faces are situated so that light entering the prism gets reflected internally until it eventually exits the prism in the direction it was designed to go.

How Does A Prism Work?

This can sound very technical depending how it’s worded, so let’s make it as simple as possible.It’s all to do with that internal reflection we mentioned earlier and how dense the glass is affecting the refractive index. This is complex but the simplified version involves just two laws or rules.

In the second case the prism face acts as a mirror. This is known as total internal reflection. Once you fully understand these rules, it is possible to create prisms to do almost anything.

There are two main types of prisms used in the manufacturer of binoculars. Both use the two rules above but they work in different ways. They are;

To alter the direction of light and invert the image you can see through the lens of Porro prism binoculars, two prisms are housed side by side. This is why Porro prism binoculars are of such a large design especially around the centre. They were named after their inventor Ignazio Porro and are cheaper to produce than roof prisms.

These fall into two types with both having the prisms suspended in the roof of the lens tubes (hence the name). The simpler design is known as the Abbe-König roof prism and works by light entering the prism, getting reflected in an upward direction. Then the light is turned in the roof only to be then reflected flat again by the second part of the prism.

The other type of roof prism is known as the Schmidt-Pechan and is of a far more complicated design. The light that enters the prism is reflected six times on its journey to the ocular lens. This makes the images from this type of prism less sharp or clear. But of the two roof prisms the Schmidt-Pechan are cheaper to produce which is why roof prism binoculars can be far cheaper than they previously were to manufacture.

They need a special coating to regulate the image but once that’s applied they will never need the prisms realigning again. Unlike Porro prisms which can need to be collimated after the slightest knock or light damage.

What are SK15 prisms?

SK15 prisms are of a high quality glass with less internal reflections to produce a clear image with great contrast.