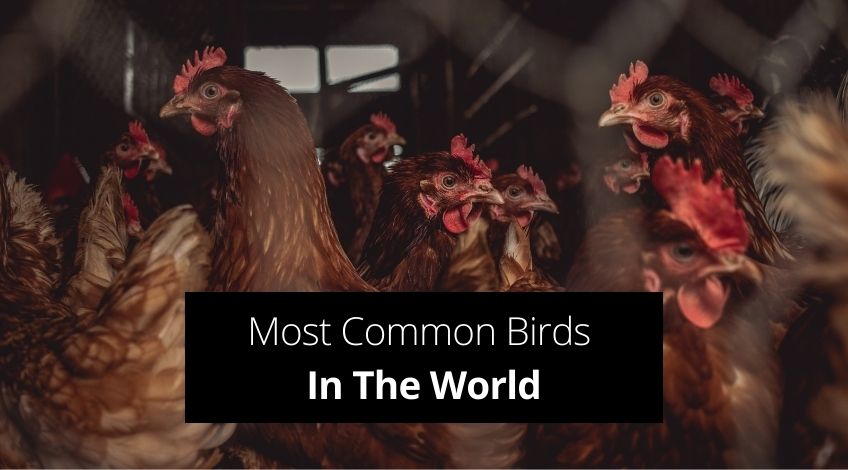 Most Common Birds In The World

The red billed quelea is found in Sub-Saharan Africa; they live in large social groups which often appear as a large swarm. These swarms can devastate cereal crops (sorghum, barley, wheat,rice and millet), and they are sometimes called “Africa’s feathered locust”. These large swarms fly to locations of recent rainfall and plenty of grass seed. The huge flocks which can reach upwards of a million, fly to an area and eat, when the birds at the rear run out of food, they fly over the whole flock to reach fresh crops at the front. From a distance these flocks look like a rolling cloud.

They estimate there are 1.5 billion individual red billed queleas and they are treated as pests. The African farmers try to control the numbers by using avicide sprays and detonating fire bombs into large flocks at night, with no apparent effect. The conservation status of the red billed quelea is the least threatened of extinction according to the International Union for Conservation of Nature (IUCN).

Quelea birds eat on average 10 grams of grain per day, which is roughly half its body weight. That means that a flock of 2 million can eat about 20 tons of grain each day! The Food and Agriculture Organisation (FAO) estimates that the value of the lost crops eaten by the red billed quelea is more than 50 million US dollars every year.

Millions of birds are killed every year however, “reducing their numbers is highly problematic – they are highly mobile, have few natural predators and breed extremely fast. Man has been unable to make a serious impact despite the arsenal of weapons available,” a spokesman for the United Nations FAO said.

“A new population can swiftly move into an area you just killed out … [and] because they breed three times per year, with an average of three eggs per clutch, one pair of quelea birds can produce up to nine offspring annually.” He added. The total population of the red billed quelea is a problem in many African countries. From South Africa on throughTanzania, Kenya and Ethiopia, and all the way to Mauritania.

An increase in cereal crops due to intensive farming throughout the African continent has had much to do with their rapid growth in numbers. Some estimate that the quelea population has increased from 10 to 100 times since the 70s. It is hard to set up national extermination programs due to the quelea not respecting national boundaries.

“The destruction is patchy – at a national level a country loses only up to 5 percent [of crops], but for the individual farmer whose entire crop is wiped out that is little comfort, “ the UN spokesman said. The common way of controlling this type of pest is by spraying on a really large scale, they use a chemical called Fenthion which is known locally as quelea-tox, which they spray in their nesting grounds.

They have tried other, more desperate measures, like fire bombing areas where the birds congregate. Even dynamite has been used! Some desperate farmers have even used flamethrowers but the quelea keeps on breeding and devastating crops. The UK based Natural Resources Institute says that around 170 “controlled operations” are “executed” in South Africa every year, which results in an average of 50 million dead birds.

According to the Encyclopaedia of Pest Management, after all of the millions of birds destroyed, the damage to crops has increased every year. These methods of control have a serious effect on the environment. Most of the farmers can’t afford to use aircraft or engage in chemical and explosive warfare against the quelea.

“The traditional way of control is mainly through bird-scaring. People go into the fields when their grain crop is vulnerable, using anything from catapults to banging and noise making – quite effective in the majority of cases, one person can protect a hectare but it’s very hard work,” The spokesman for the UN said. This is because the crops need protection for at least a month, from sunrise to sunset every day.

The UN has tried to predict how breeding flocks will migrate based on the weather patterns, they’ve considered wide scale netting, introducing natural predators and they’ve even considered creating a quelea virus. Now they are considering ways to turn this small but destructive bird into a source of food.  “We have been trying to develop systems to catch the birds and turn them into food for people – they would make a great source of protein.” Said the spokesman from the UN.

What Is The Most Common Bird In The UK?

The wren is the most common bird in the UK with an estimated 8.5 million breeding pairs. They are a secretive bird that doesn’t show itself very often and don’t come to garden feeders as a rule. They mainly eat insects and spiders, and are around 9 to 10 cm (3.5 to 4 inches) long. Wrens have a loud call for such a small bird so it’s quite possible you might have heard them rather than seen them.

The 10 Most Common Birds In The World By Population

What Bird Is Found All Over The World?

According to some sources, the European Sparrow is the one bird you’re most likely to spot wherever you are in the world. The sparrow appears to be dependent on humans and has been following us around the globe. As man moved to Europe, the sparrow followed and so on. This is all alluding to prehistoric times and once the sparrow followed humankind from continent to continent it evolved into various species of small bird.

This would make the common house sparrow the most common bird in the world. So this at first glance a simple question, is not as simple as it seems. It all depends on your interpretation of “common”, whether you define common as most by number, most by population or common by frequency of spotting. We just gather the facts, how you interpret them is for you to decide.

Which is the most abundant bird of the world?