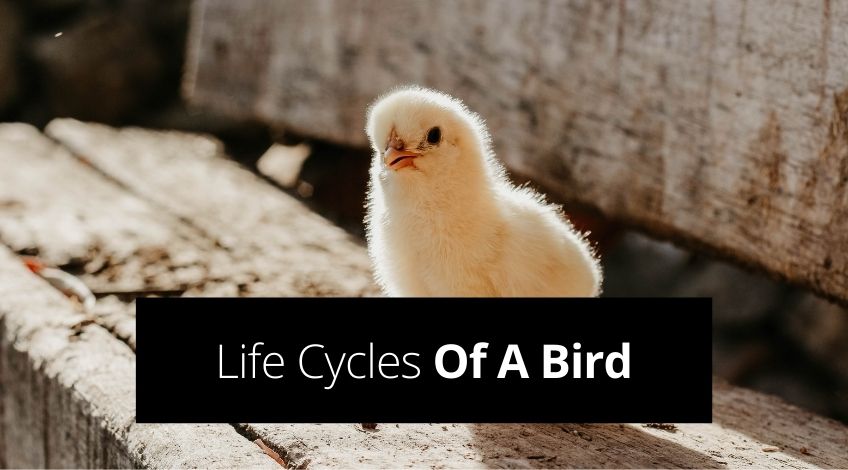 Life Cycles Of A Bird (everything you need to know)

Of the estimated 10 to 20,000 species of birds on planet earth, with all their varying colours, patterns and size differences, they all share one thing in common, they all hatched from an egg to start their lives. How that egg found its way into the nest is another story and one set for another article.

But female birds can be fussy about where and how the nest is constructed. In fact scientists have recorded a female wren rejecting 12 nests before she accepted the correct one made by her mate, 13th time lucky we suppose.

The Shape Of The Egg Is No Mistake

Eggs are an ovoid shape, it has a convex surface that will resist extreme pressure, much like the design of an arched bridge. The egg of an ostrich will take up to 50kg of pressure before it will smash.

What Came First, The Bird Or The Egg?

That’s one of those philosophical questions that is too deep to go into right now, but for our purposes, let’s suppose the egg came first. Because the egg is the first stage in the lifecycle of a bird. No matter the species, type or location, all birds come from eggs. The amount, colour and size vary from species to species. Birds with longer lifespans tend to lay less eggs, for instance many of the longer living seabirds lay only one egg. Whereas some game birds with shorter life expectancies can lay as many as 20 eggs.

How Many Eggs Make A Clutch?

The amount of time a bird spends developing in the egg also varies depending on species. Larger birds lay bigger eggs which take longer to hatch, for instance swans sit on their eggs for up to 6 weeks before the egg hatches, but the much smaller blue tits incubate their eggs for 14 days.

Swans incubate between 4 to 8 eggs depending on the variety whereas blue tits incubate anywhere between 8 to 16 eggs with the hen laying one per day until she’s finished (she usually lays them first thing in the morning).

Many birds are born with a bony growth on the upper beak. This growth is called an egg tooth and is made from calcium. It helps the chick to break through the shell to escape the egg and for want of a better term, born or as it is called in the ornithological world, hatch. The egg tooth falls off a couple of days after the bird hatches and is not only found in birds, they are also found in reptiles, spiders and monotremes (mammals that lay eggs).

At this stage in their development, birds have changed from eggs to hatchlings. This term simply means they have managed to develop enough to break free of the egg shell and hatch. From this moment on they are completely dependent on their parents to survive. They are born covered in a soft down – not feathers and they can’t yet fly so it’s the parents that bring them all they need nutrient-wise to survive.

They are now called nestlings, as they cannot leave the nest. They firstly don’t have the physical strength. And secondly they don’t have the means to survive outside of the nest. They will eventually lose their downy covering and develop feathers which they need for flying and keeping warm and dry once independence is obtained.

As they continue to grow from the food supplied by their parents they are strengthening their muscles to help them learn to fly. At this stage they are called fledglings, once their feathers have fully grown and their muscles are strong enough, they attempt to fly, their first flight is called a fledge.

The Cycle Of Life

Within days of their first successful flight, they take to the air under their parents supervision, and are schooled into what is good food, where to find food in relative safety, what they should keep away from. How to evade predators, find water, where to find others of the same species and, before long, they become independent birds.

Ready to fly off, build a nest, attract a mate and rear their own young to become independent adult birds.

Life Cycle Of A Bird Summary

Impregnated female birds lay eggs, once they have laid a full clutch of eggs they incubate them for the allotted time until the birds are ready to hatch (this is between 2 to 6 weeks depending on the species). So the life cycle of a bird starts with the fertilised egg, and after the baby bird breaks through the egg shell it goes through the following stages:

This refers to hatchlings that are a few days old, by now they are usually covered in a soft down. Their eyes will now be open but they are still fully reliant on their parents and do not leave the nest.

Fledglings are in reality chicks that are now developing flight feathers and wing muscles. They will sometimes explore outside the nest but only under the strict observance of their parents. They are able to manage to fly for short distances but will be actively hopping around by this stage. The period of time it takes a bird to move on from a fledgling to the next stage varies from species to species.

The Life Cycle Of A Duck

Ducks are waterfowl and spend most of their life in or around water. Unlike other birds, waterfowl have specially adapted feet that are what we call webbed, these are more like scuba divers’ flippers and are used to propel the duck through the water with ease. They also have specially developed feathers that are much more water resilient than other birds.

When Do Ducks Choose A Mating Partner?

There are some waterfowl, geese and swans included who pick one partner for life; these are called monogamous, but ducks like most other bird species choose a new mating partner each year. Usually just towards the end of Winter at the beginning of the mating season. There are some duck communities where one male will mate with several females who are living within his territory.

Where Do Ducks Nest?

Ducks prefer to nest in sites close to water, they prefer well covered areas with a lot of vegetation or even in the hole of a tree. Some duck nests have been discovered in boat sheds, wood piles, hay stacks, in fact anywhere that is likely to be undisturbed during the laying, incubation, and hatching periods.

The female duck makes her own nest, using grass, leaves and other easily available material. She then lines it with her own down that she plucks from her own chest. The males only part in this or any other part of the chicks life, is mating, and protecting the female once the eggs are laid. He also brings her food during the incubation and hatching season.

He then loses interest and joins other males to shed his bright feathers and replace them with dull, brown feathers much like the females this period is called the moult. During this time he loses his ability to fly because the flight feathers moult as well. Of course during this period he is extremely vulnerable to predators and this could be why he deserts the female, self preservation and less likelihood of the female and the chicks being spotted.

When Is The Egg Laying Season?

For ducks, the egg laying period goes from around mid March until early July. Ducks generally lay 12 eggs per clutch, and she will lay one or two eggs per day until the clutch is full. She has the job of incubating the eggs alone, which usually takes around 4 to 5 weeks.

After their month or so incubation period, the ducks hatch using their egg teeth to break through the egg. Hatching can take anything between 3 to 24 hours, during which time the mother duck is calling to the chicks constantly. This is to get them used to her voice which will be necessary once they are out into the world with all the dangers that entails.

The Ducklings Life Lessons Begin At Once

Around 12 months after hatching, ducks are able to leave their mother and siblings and become independent adult ducks able to start the cycle of life all over again. The average life expectancy of a duck is anywhere between 5 to 10 years, but many don’t make it past their seventh year due to predators.

Here in the UK ducks have many predators including:

Many will only take eggs but there are a few on the list that will actually kill adult ducks as well as chicks.

What are the 4 life cycles?

The 4 stages of a life cycle of all animals are birth, growth, reproduction and death, while these stages are common to all life, there are differences in species. For example mammals give birth to live babies whereas birds, reptiles and insects are born from eggs.

What are birds called before they hatch?

What are baby birds called?

A new born baby bird is called a hatchling, then it grows into a nestling.