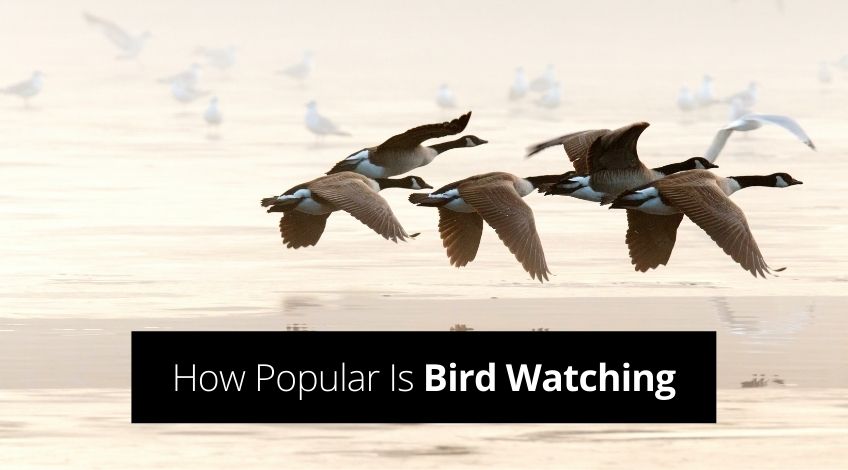 How Popular Is Bird Watching?

Many of us have known the absolute joy that can be obtained from bird watching for many years. But since the rise of the pandemic and subsequent lockdown, many more people have discovered a newfound interest in our feathered friends. While we were all in a self-imposed lockdown, many discovered the freedom on display directly outside their windows.

The lockdown coincided with the Northern hemispheres Spring bird breeding season which meant a heightened flurry of activity right on our doorstep. With many people turning to the birds for a way to keep sane, birdwatching as a pastime increased exponentially. Most modern day bird watchers turn to the internet for bird identification knowledge.

In the year before lockdown Wikipedia’s users visited the site 44,000 times in search of information on the Blue Jay. One year later that number of searches rose to 85,000 and then fell this year to 73,000. This suggests that many people haven’t discarded their new hobby since lockdown ended.

Why The Sudden Interest In Wild Birds?

We all live busy lives (usually) and take the natural world around us for granted, but during periods of deprived movement and denied social activity, we all had to look elsewhere. Many assumed that our gardens only contained pigeons and sparrows, but soon noticed other, more colourful interesting birds. That leads to finding out what species they are and where they’ve come from and, there you have it – hooked.

Not Just The Domain Of The Old

There have been numerous surveys into the demographic of people that claim bird watching as a hobby. Back in 2011 the U.S. Fish and Wildlife Service[1] discovered that in a participation rate by age group study that in the U.S.A.;

Moreover, bird watching is not a male dominated hobby either with more than 56% of all birdwatchers being female.

In the UK birdwatching has overtaken fishing as the #1 hobby and in Canada more people bird watch than garden. Also in the UK 32% of bid watchers are aged between 16 to 25.

Many use these terms interchangeably but there are distinctions between the two.

Is the act of watching the birds in your garden or local park etc and possibly feeding the birds. Birdwatchers often know the names of a few birds and notice any new varieties of birds. This is the usual way birdwatchers graduate to birders.

Birders also watch birds in their gardens and parks but will know many more species and travel long distances to view unusual and rare birds. Birders own at least one bird book and can identify many species and many birders keep detailed lists of the birds they have seen. Many birders contribute to science projects to track birds etc.

Is Bird Watching An Expensive Hobby?

At its simplest level, bird watching costs absolutely nothing, all you need is a space where birds fly, your eyes and patience. For convenience you’ll need a decent pair of binoculars and possibly a notebook to record what species you’ve spotted and where. A decent pair of binoculars will set you back anywhere between £100.00 to £250.00 but treated well they’ll last you a lifetime.

The expense sets in if you decide to travel to different areas to view species not seen in your locale. Then there’s travel and accommodation costs and food of course.

How Popular Is Bird Watching?

We have discovered that bird watching is more popular in the UK than fishing, more popular in Canada than gardening and more popular with American women than American men. The RSPB website in the UK has seen an increase in users of 69% during the lockdown period, with Wikipedia seeing an almost double interest in certain bird species articles over the same period.

The bird watching industry in the U.S. was worth a total of nearly $41 billion in 2011 according to the U.S. Fish and Wildlife Service[1] and in the past year there has been a 96% increase in traffic to the RSPB bird A-Z page[2]. According to the CBI [3] more than 37% of all European tour operators offer tourist trips for bird watchers. The same study found that the average birder in Europe spends around 100 Euros per day and several days in the same location. Due to a more enlightened approach to nature conservation more millennials are becoming bird watchers. There are new factions springing up all of the time recently with names like;

The top 6 European countries for bird watching are;

Just like the UK, Netherlands are a nation of bird watchers, the Dutch bird conservation organisation De Vogelbescherming[5] has more than 140,000 members. Unlike their British counterparts, Dutch bird watchers tend to prefer more active pastimes that include watching birds as a part of but not the whole activity.

The German bird conservation organisation Naturschutzbund Deutschland[6] has recently broadened its scope to cover more general wildlife and has around 820,000 members and sponsors.

In Sweden bird watchers are interested in the more academic areas of bird watching, Birdlife Sweden[7] is the national bird conservation organisation with more than 16,000 members.

The association for the conservation of nature, the protection of biodiversity, and the promotion of ecological culture in Italy, Lipu[8] has over 30,000 supporters.

The Spanish organisation for bird conservation SEO Birdlife[9] has over 150,000 supporters.

As you can see bird watching is a popular hobby Europe Wide with millions of participants enjoying watching birds on a regular basis.

Why Is Bird Watching So Popular?

Why is birdwatching so popular?

Bird watching is popular because it is an inexpensive, easily accessible hobby with no limitations on age or health.

What is the difference between birding and bird watching?

Why is birding good for you?

Birding is good for your mental and physical health. It stops you from magnifying problems by distracting your thoughts and walking in the woods gives your body a workout.