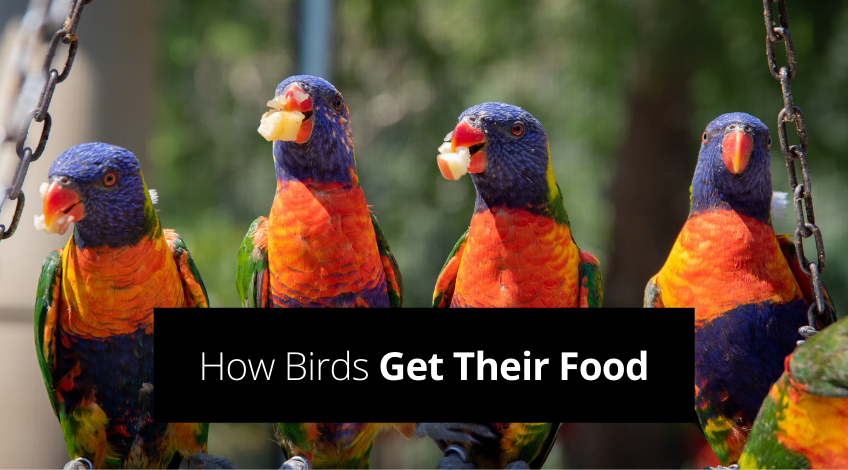 How Do Birds Get Their Food?

Different birds get their food in different ways, in this article we’ll take you through the most common ways birds get their food. From foraging to hunting and on through to piracy, birds have developed their own techniques for getting food. Some birds search for food in groups while others prefer to hunt alone.

How Do Small Birds Get Their Food?

Many small birds search in groups to increase their chances of finding food. Woodland birds often search in flocks of mixed species especially during Winter months when food is harder to find. If you spot blue tits looking through a tree in search of food keep your eyes open as you may spot long-tailed tits, treecreepers, goldcrests and nuthatches too.

Many insect eating birds have learned to follow animals that graze like sheep and cattle and eat any insects they disturb. Yellow wagtails have become experts at snatching insects in this way.

In South Africa there is a bird that works with a particular mammal to successfully get fed. The Honeyguide is a small bird that feeds on beeswax, when it finds a bees nest it calls to the honey badger. Honey badgers are a mammal found in South Africa that have thick skin which is indifferent to bee stings. Once the honey badger has scaled the tree and ripped the nest open the honeyguide can fly in and eat the beeswax.

The gannet is a voracious eater of fish, which it has to dive to catch. There are fast aggressive seabirds called great skuas that chase gannets forcing them to drop their catch allowing the skuas to swoop down and eat the catch themselves. This action is known in the birding world as piracy, and it’s easy to see why.

Birds Use Tools To Get Their Food

In many ways birds are ingenious and yet we regard them as “dumb animals” but check out a few of these clever birds and the ways they have found to get their food.

Birds don’t only use rocks as perches, many use them as the key to open their food. Herring gulls like to eat the fish contained in shells, the problem is they can’t get the shells open. The solution is to fly high into the sky with a mussel or other seashell in their beaks and drop it from a great height onto the rocks below. As you might expect, the shells shatter and the gulls get lunch.

If you ever pass a rock with what looks like bits of broken shells all around it, you have probably found the snail opening rock of the song thrush.

Saving Food For A Rainy Day

Some birds store up food when it’s in plentiful supply and go back when times get hard. The technical term for this sort of bird behaviour is caching, and some birds have it down to a fine art. Nuthatches are known to fill crevices in tree trunks with nuts and then cover them with moss. When Winter comes and food is in short supply, the nuthatch goes back and has its own larder full of food.

Jays can amass 5,000 acorns each Autumn, which they bury in different spots all over the woods. During Winter they return to their burial sites and retrieve their food. Sometimes they forget the odd few which grow into oak trees to feed following generations of Jays.

The Driving Force Of The Japanese Crow

In Japan, crows have learned just how easy it is to get nuts cracked open for them. They place nuts directly in front of the wheels of cars stopped at traffic lights. When the cars drive off the shells get cracked and the crows swoop down and collect their nuts.

How Do Birds Eat Their Food?

Young birds need to digest their food fast to allow them to grow quickly. For example willow warblers have to fly from the UK to Africa, a distance of around 6,000 miles, within 2 months of being hatched. Birds’ digestive systems are adapted to get the most from their food in the shortest amount of time. Birds can turn food into fat in next to no time. They have to sometimes double their weight in just 2 weeks before migration.

Birds have evolved beaks in place of teeth, this means they have no way of chewing food. Instead some birds have gizzards that are muscular second stomachs that mash food into digestible pieces, and others like pigeons have a pouch in their throats called crops. The crop allows them to eat food fast and digest it when they have more time or are in a safer place.

Many birds of prey use their gizzard to store feathers, fur and bones which they cough up in a ball shaped mass. This mass is known as a pellet, and they can often be found below trees that owls roost in. If you were to soak them in warm water they would reveal mouse skulls and the remains of whatever else the owls had fed on.

Birds Beaks Have More Than One Use

A beak is made from the same material as our fingernails, keratin is quite a light substance which means even toucans have relatively light beaks. Most birds can only move the bottom half of their beaks but the parrot and some others can move both halves. This allows them to get a stronger grip on their food.

Beaks can also be used for cleaning their feathers, digging for food, turning eggs or splicing together a weave from various materials to make a nest. Some birds like woodpeckers use their beaks as hammers to knock food from tree bark.

Other uses for the beak include cooling the blood down in extreme heat and as an attractive feature to get a mate. Toucans use their beaks to attract females with the size and colouration of their beak. The same goes for puffins, only they grow scales especially for the nesting season. These colourful scales fall off after breeding and their beaks become plain again.

There are many variations in the shape of bird beaks, and these shapes have adapted over time to help them get their food. Sparrows crush seeds with their short, thick beak, snipes dig for worms with their elongated straight beaks and robins catch insects with their thin, short beaks.

Sparrowhawks rip meat apart with their sharp hooked beaks. The crossbill has a beak shaped like a pair of tweezers and is ideal for prising out pine cone seeds. Many fish eating birds have serrated edges like saws, this gives them the nickname of sawbills, this helps them to keep a hold of the fish they eat.

Flamingos have a lining in their beaks that filters the plankton they eat out of water. They take a full beak of water and pump it out leaving the tiny food inside.

There are certain hummingbirds from Ecuador that are called sword-billed hummingbirds. Their beak is longer than their entire bodies which they use to get deep into flowers to get the nectar as they hover in front of them.

How Do Garden Birds Search For Food?

Birds need to eat regularly to maintain their energy levels, this means they have to be constantly on the lookout for food. If you usually put food out for them and you wonder how they seem to appear just as soon as you have filled the bird table it’s because they are always flying around and looking for food. This will include all of their local food haunts, your garden included. Birds of prey have powerful olfactory glands which allows them to smell food out easily.

Birds have great memories so they will return to regular sources of food frequently to see if the food tables have been replenished. Birds often call their friends and family once food has arrived. That said, they can become very aggressive to outsider birds who also drop in for a snack. Birds also keep their eyes on feeders and notice when they have been refilled so if you start to feed the birds remember to continue daily as they become dependent over time.

Is it hard for birds to find food?

It is not hard for birds to find food, they have exceptional eyesight and can spot food from a long distance.

What birds do all day?

Birds spend virtually all day searching for food unless they are nocturnal birds who spend all day trying to sleep.

How do birds know when you put food out?

Birds are always on the lookout for food and will often send one bird to see if your feeders or bird table have been refilled.

Is bread bad for birds?

Bread is not bad for birds in small amounts, but it is better to give birds a more healthy diet like fruit or seeds, nuts etc.