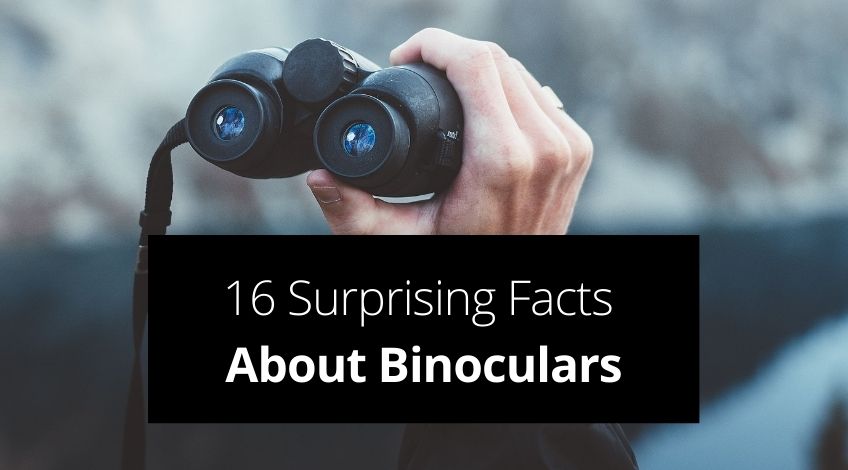 We are all familiar with binoculars, either used by avid stargazers, bird watchers, or even those pay to view extremely large binoculars on many piers throughout the country. But binoculars have some fascinating stories attached to them. There’s even some dispute about the date they were invented. So without further preamble, let’s get into some of the surprising facts about binoculars.

The first ever functioning binoculars are attributed to J. P. Lemiere in 1825, but a patent was rejected in 1608 for what can only be described as binoculars by Hans Lippershey who did actually produce the first pair of binoculars for the Dutch army. The fact that they had a poor resolution and an even worse magnification, made them very unpopular and so a failure.

But it doesn ‘t even end there, Galileo Galilei the famous Italian Scientist introduced the telescope to science in 1609 but some people claim he invented the binoculars a year earlier. Now we don’t know if that’s truth or fiction, maybe you can find out the truth?

#2.   Box Shaped Binoculars Were Invented In The 17th Century

During the second half of the 17th century and into the first half of the 18th century what can only be described as “Box-Shaped” binocular terrestrial telescopes were being invented and improved upon by 3 different men in 3 different cities in 3 different European countries. Cherubin D’Orleans in Paris (France). I. M. Dobler in Berlin (Germany), and Pietro Patroni in Milan (Italy) were all working on producing the box-shaped binoculars. Sadly due to their general poor quality and poor handling, they were soon forgotten.

#3. The Credit For Making The First Binoculars Goes To J. P. Lemiere

The credit has to go to our old friend J. P. Lemiere, who devised and is credited with the first real binocular telescope in 1825.

#4. Binoculars Would Be Upside Down And Back To Front If Not For Ignazio Porro’s Prism

In 1854  Ignazio Porro patented his system using prisms to keep the images seen through binoculars up the right way and not back to front either. Without Porro’s addition, all binocular images would be both upside down, and back to front. It would seem when it comes to binocular design and invention, we have a lot to thank the Italians for.

#5. The 2 Number System Means The Magnification And The Aperture

Binoculars often have 2 numbers stamped or engraved onto them. Numbers like 7×50 or 10×35. The first number indicates the magnification value, in the first example that would mean 7 times magnification. The second number in this case, 50, indicates the aperture or diameter in millimeters. The larger the aperture, the clearer the image will become.

Another way of describing the aperture is the field of vision. This means the amount of area that can be seen through the lens.

#6. 10 Times Magnification Would Be Too Shaky To Hold

For people who suffer from very shaky hands, for instance Parkinson sufferers, it is possible to buy stabilized binoculars. These work using internal gyroscopes to compensate for the movements caused by hand shakes. There are some of these stabilized models that have up to 20 times magnification.

#8.  The Name Binoculars Comes From Latin

The Latin word “bioculus” which means two eyes, is said to be where the word binoculars has come from. Their reasoning derives from the fact that in 1609 the famous Italian inventor, Galileo invented the first 2 lens optical device.

#9. How Far Can You See Through Binoculars?

This is one of those misleading questions really, because even without binoculars, you can see as far as the sun, and that’s around 94 million miles away so we are reliably informed by our tech guys. So the question should be how much closer do objects appear using binoculars? The answer to which depends on the magnification number stamped into the binoculars.

For the sake of argument, let’s say the magnification is 10 times, indicated by the sign 10x. Now to explain it in easy to understand terms. If you are standing in a clearing, looking at a tree far off in the distance,  let’s say the tree is 100 yards away, you can see that tree as if it was only 10 yards away by looking through 10x magnification binoculars.

If you move quickly from a cold spot to a relatively warm spot, your binocular lenses are likely to fog up. If you have fog-proof binoculars that fog will be only on the outside, which can be removed using the cloth provided with the binoculars.

The insides will be clear, how do they do that?

The way it’s done is by removing all of the oxygen from the inside of the lenses and replacing that oxygen with nitrogen. Nitrogen has no moisture content so it’s unable to fog up. Remember this only clears the insides of the lenses, the outside will need a gentle wipe with a soft lens cloth.

Any boffin will tell you that glass reflection loses light, in fact untreated glass can lose up to 5 percent of light. Now binoculars are made up of so much glass with all the internal prisms etc. So binocular makers use coatings on each area of glass to prevent light loss.

#13.  Stargazers Can Expect To See Deep Into Space

Just using a regular pair of binoculars, on a clear night assuming that the following objects are visible at that time, you will be able to spot: The Orion Nebula, Mars, Saturn, Jupiter, the moon, Pleiades, many meteors and satellites.

#14. There Are 2 Main Types Of Binoculars

The first system of lenses were designed by Ignazio Porro (remember him?) He used 2 right angled prisms to spin the image so that the user of the binoculars sees a true, clear image. His system is found in most modern, wide bodied binoculars, good old Porro!

The second system is used in the smaller, straighter, more compact type of binoculars; they actually look just like two skinny tubes joined in the middle with a hinge. Although these are compact and don’t take up too much space, they are prone to many problems, including severe light loss, separation of colour and much more besides. As a result of this they need many coatings of a special corrective material to alleviate these problems.

#15. Some Waterproof Binoculars Are Actually Waterproof

There are many binoculars sold as weather-proof or some even go so far as to claim to be waterproof, but sadly, there is no such thing as a fully waterproof pair of binoculars. That is unless they can prove a JIS class 8. What is the JIS class system we hear you ask, well it’s an industry recognised standard for waterproofing. That starts at class 0 which indicates no protection against water, and class 8 which indicates that the device will remain dry during continuous immersion in water. There are JIS class 8 binoculars for sale, but they are not cheap. Beware of any binoculars that claim to be waterproof but don’t display a JIS class rating.

Since Lemiere invented the binoculars in 1825, they have been used by opera goers, mainly those sitting farthest away from the action. Opera glasses as they were called, are smaller than regular binoculars and were also known as theatre binoculars or Galilean binoculars. They traditionally have a 3 to 5 times magnification which allows a sufficient field of view to see what’s happening during the production.

So that’s our 16 surprising facts about binoculars, read on for our bonus full information about the JIS class of waterproofing.

The Japanese Industry Waterproof Scale (JIS) uses a system of 0 to 8 scale to indicate how waterproof a device is. The JIS is the most recognised system for waterproofing and the classing goes as follows:

It’s worth remembering that the JIS standard is used for many different types of products, not just binoculars. Also many top end binoculars are JIS 6, JIS 7 or JIS 8. Whereas many low priced models claim to be waterproof or weather-proof but are only JIS 1. This really is one of those times when the old saying “you get what you pay for” is true.

Be sure to check the JIS class before buying, especially if you intend to use your binoculars whilst kayaking or whale watching, or even just bird watching in the rain.

Binoculars are so called after the Latin word for two eyes which is bioculus.

What is a single binocular called?

A single binocular is called a monocular.

Can you stargaze with binoculars?

You can stargaze with binoculars, in fact in many cases binoculars are better than telescopes for stargazing.