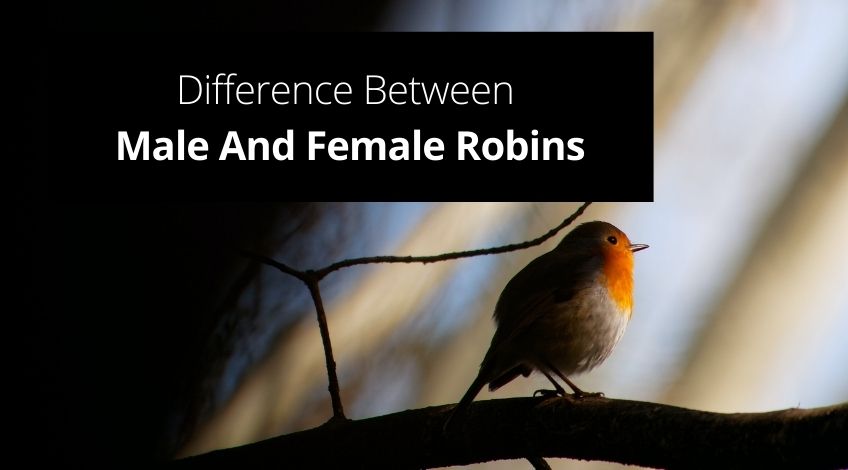 Difference Between Male And Female Robins (how to tell them apart)

This is one of the questions we get asked the most here at Binocular Base, and the truthful answer is, you can’t. If you have 2 robins visiting your garden at the same time, you can be pretty sure they’re a pair, as they are very territorial and one male would not tolerate another male being on his turf. However distinguishing which is the male and which is the female is virtually impossible.

How Some Experts Tell The Difference Between Male And Female Robins

Some say that the male robin’s red breast has a brighter colour than the females. But to the untrained eye, it’s virtually impossible to see. There is also a slight difference between the shape of the peak on top of their heads. The male robin’s peak is squarer, and more shaped like a U than the female’s. She has a slightly more V shaped peak, this is only visible from directly above, but again it’s terribly difficult to see unless you are an expert.

Some Common Misconceptions About Sexing Robins

Some people assume that like most birds, the female robin is a dull, drab looking bird with no red breast. This is not true, they both have red breasts. It is only the youngsters that don’t have a red breast. Others say that the female has white bars on their wings, and males don’t. That’s also not so, they both have them. Others say that as only the male robin can sing, it’s easy to tell the difference, but that is also incorrect, because both male and female robins sing.

This is another one of those claims that are made that are both right and wrong. Why? Because it depends on the time of year and the season the birds are in. You see in some cases male robins are slightly larger than females, emphasis on the some. However during the mating season,  when the female is carrying the eggs, she can be larger than the male.

The Only Way To Tell The Sex Of Robins

Unless you are an expert ornithologist or a scientist that studies birds, there doesn’t seem to be any way to tell the difference between male and female robins. But, if you are fortunate enough to have a pair of robin’s nesting in your garden, the one who builds the nest will be the female plus she will also be the one who incubates the eggs. The male will be the one feeding the female during courtship.

Robins In Gardens Or Parks Will Usually Be Males

Even during the breeding season, most robins who hang around in parks or gardens are male. We have spoken to an ornithological expert with many years of bird behavioural studies behind him and he says that it is virtually impossible to determine the sex of a robin just by looking at it. Unless you are lucky enough to actually see them copulating, then it will be easy to tell the difference between them.

The Territorial Behavior Of Male Robins

The male robin is very territorial, he only lets the female into his territory during the breeding season. You can tell when a robin is in your garden by his song which is letting any other robins close by know that this is his territory, and he’s prepared to fight to protect it. Part of the mating ritual for robins is for the male to feed the female.

She builds the nest with him watching on to protect her and his territory and the eggs once they are laid. He will bring her food while she is incubating the eggs. It is often the case that if you get visited by a male robin, and you provide the food he likes, he will choose to invite his mate to nest close by.

What Do Robins Eat?

Robins eat a varied diet consisting of seeds, insects, worms, fruit, a variety of invertebrates, and they also eat kitchen scraps and mealworms off the bird table. Gardeners have become modern day wild pigs, because robins used to follow wild pigs around to eat any worms they uncovered whilst rooting through the ground for food. Now robins will follow gardeners around and do just the same.

It’s The Females Duty To Make The Nest

She makes the nest using dead leaves, hair and moss. She builds a nest the shape of a cup close to ground level. Robins are sensitive about their security and if she thinks the nest has been discovered she will move to another site and start building again. She will usually lay between 4 to 6 eggs and the incubation takes around 13 days.

Once the chicks hatch, the female removes all of the eggshell from the nest. Both the male and the female look after the young nestlings who will fledge at around 2 weeks of age. The male will keep on caring for them for around another 3 to 4 weeks. They will usually have 2 broods per year with the last nestlings being fledged by the end of July/August.

Why Are Robins Featured On Christmas Cards?

During the Victorian period, the robin became the most popular bird of the Christmas period. This was because the uniform of the postman featured a red waistcoat and they were nicknamed “Robins”. So the birds made it onto the cards to represent the robin redbreasts who delivered the cards.

Are male robins larger than females?

Generally speaking, male robins are slightly larger than females. But during the breeding season the female can be larger than the male.

Do female robins have a red breast UK?