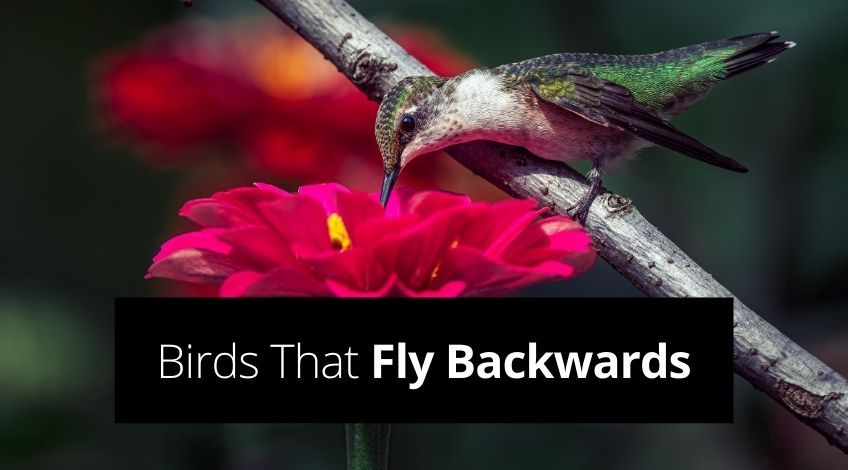 The majority of birds have a similar wing and muscle structure, their muscles that pull the wings downwards are much stronger than their upward pulling muscles. This is to force the air around the wing backwards which pushes the birds forwards. Hummingbirds have developed their wing muscles so they can move their wings in all directions. Backwards and forwards and up and down.

They are the only bird to have a rotator cuff, which they have in common with us humans. The rotator cuff gives strength and support to the shoulder joint allowing the wings of the hummingbird to move in a figure of eight.

This allows them to perform many amazing moves whilst in flight plus the capacity of flying backwards. They can also hover, fly upside down, and they can flap their wings between 12 to 80 beats per second which can increase to over 200 beats per second when they’re diving.

Hummingbirds Are Always On The Move

Hummingbirds are a fascinating bird and extremely entertaining to watch whilst inflight. The only time they are ever still is during short periods of rest or when they are asleep. They are a small bird, with an overall length of 5 inches (12.7 cm) and weigh less than  0.07 lb(31.75 grams) and their heart rate can be more than 1000 beats per minute!

How Do Hummingbirds Get Their Name?

How Much Do Hummingbirds Eat?

Hummingbirds have a very high metabolism which means they burn a lot of energy in a very short time. As a result of this they have to eat twice their own body weight every day to survive. At night they have the ability to slow their bodies right down to almost a hibernative state. This slows their metabolism, lowers their body temperature, and slows their heartbeat to around 180 beats per minute. Which is considerably less than the 1,260 beats per minute their hearts can reach during flight.The average lifespan of a hummingbird is 3 to 5 years.

What Do Hummingbirds Eat?

Hummingbirds are famous for eating nectar from flowers but in addition to this they also eat;

So they are a very useful bird to encourage in your garden if you are fortunate enough to live in an area where they can survive. Hummingbirds live in North and South America, and the Caribbean countries, they are mostly found in the tropics.

Have Hummingbirds Been Seen In The UK?

Every sighting of a hummingbird in the UK that’s not in a zoological garden has been found to be a hummingbird hawk moth. These moths look similar to hummingbirds and they mimic the birds actions as they hover over flowers to collect nectar and they are able to fly backwards too. They are also day time feeders which adds to the confusion. According to the RSPB “there are 100s of cases of mistaken identity every year”.

How many species of birds can fly backwards?

There is only one species of bird that can fly backwards and that is the hummingbird.

Blue jays cannot fly backwards, sometimes due to wind pressure they can appear to be flying backwards but the only bird that can actually fly backwards is a hummingbird.

What’s the smallest bird in the world?

The smallest bird in the world is the Bee Hummingbird which lives in Cuba and is 2 and a quarter inches (5.7 cm) in length.