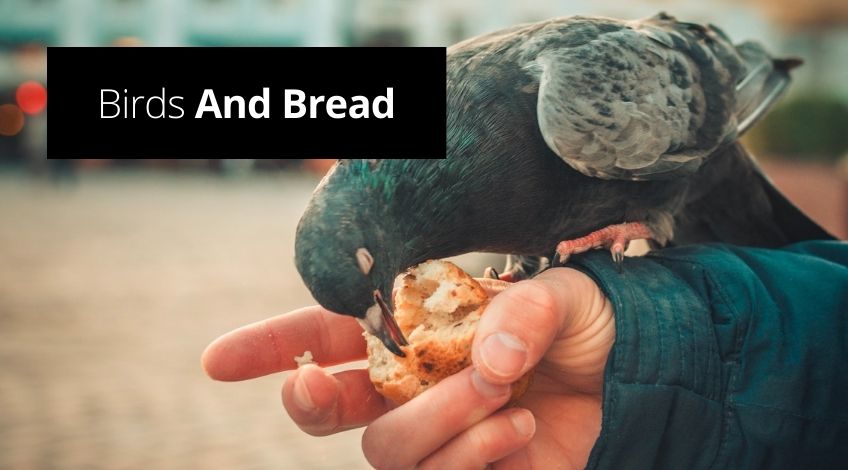 This is a question we get asked quite a lot at binocular base, well the short answer is, yes but only in small amounts, and as long as it’s mixed with other, healthier food stuffs. We always say don’t feed bread to ducks. But garden birds are in a different situation to ducks and other waterfowl.

Why Do We Say Don’t Feed Bread To Ducks?

Lots of people buy a cheap loaf of bread specifically to take to their local pond and feed the ducks. Now in small quantities bread is ok for ducks and other waterfowl. It’s like us having junk food, it’s ok once in a while, but if we were to eat it regularly we would soon become unhealthy. It’s the same for ducks, we don’t know how many people have visited that same pond today, or how many loaves of bread those ducks have consumed.

Too many carbs and the ducks will soon become obese and possibly unable to escape from any predators that visit the pond. They will also become malnourished which will lead to deformities and other serious illnesses and conditions.

So to be on the safe side we advise not to feed bread to the ducks but feed them a more waterfowl specific food like bird seed, grains or specific duck pellets. Even frozen peas are better than bread.

Is Bread Bad For Birds?

As we said earlier it’s ok in small amounts and as long as it’s mixed with other healthier foods like mealworms, bird seed or other similar foods. Bread is carbohydrate based and too many carbohydrates are not good for anyone, but we all benefit from a few carbs in our diet, birds included. Bread contains salt, flour, yeast and some type of fat and in terms of nutrients bread is low in protein, fibre and many micronutrients that are essential to health with white bread being worst of all.

Some bread crumbs mixed in with other kitchen scraps will not harm the birds but if all they feed on is bread, they will soon become full of empty calories. This will make them ill, so go easy on the bread when feeding the birds.

What Should We Feed The Birds?

What Should You Not Feed Birds?

You should not feed birds any of the following:

While it’s not advisable to give too much bread to birds, if you do give the birds some crumbs, wholemeal bread is best. It contains the whole of the wheatgerm, this means at least there is some fibre in the carbs. Better still get some whole grain bread which contains seeds too. Wholemeal or whole grain bread is healthier for the whole family not just the birds and you’d be giving the birds far less that way.

Variety Is The Spice Of Life

We don’t eat the same foods every day, it would not only become boring, but it would not be nutritionally balanced. It’s the same with the birds, try to mix up their feed to give them variety and a better nutritional mix.

How To Feed The Birds

If you want to, you can just throw the bird food on the lawn, but we wouldn’t advise it, any uneaten food left on the lawn can attract rodents to your garden. We advise either getting a bird table, or if you want to feed the birds seeds, or nuts it’s best to get a feeder specifically designed for that purpose. These can be hung either from tree branches, or from anywhere safe for birds to access without fear of predators.

For fat balls or suet blocks be sure to get the correct size and shape feeder; these can also be hung from trees or high bushes or anywhere the birds will feel safe. If you are going to use more than one feeder spread them out around your garden, that way you will create enough space for more birds to visit.

When Should You Feed The Birds?

In many cases, birds do alright for food during the warm, Summer months. But if you are already feeding them, keep it up as they get used to regular food sources and nest close to them. It takes up a lot of a bird’s energy during the Summer months with nesting, rearing their young and protecting their territory so keeping a regular food supply close to the nesting site is essential for their survival.

During Winter, it takes a lot of a bird’s energy just to keep warm, so a constant food supply is essential. Especially food high in fat content like nuts, seeds, fat balls and suet blocks. Plus of course, their natural food supplies are much more limited in the Winter months. No seeds, berries, fruit and far fewer insects too.

From the Spring there is an abundance of food for birds, but what is often in short supply is freshwater. If you are thinking of feeding the birds, it’s worth considering a birdbath too. It doesn’t have to be elaborate, just a shallow container placed in a safe space, possibly in the middle of the garden where birds will be able to spot predators and quickly make their escape.

Freshwater is important for birds in more ways than one. Yes they need hydrating like we all do and more so during the hot Summer months. But birds also clean their feathers in freshwater, the water loosens any dirt, making it easier for them to remove when they preen themselves.

Preening is where birds clean their feathers and rearrange them back to their original positions, they also spread oil from the preen gland to keep them waterproof and able to trap air to insulate them during the cold evenings and through the Winter months.

Birds Need Water During The Winter Too

During the Winter when the weather is freezing, birds find it difficult to find any freshwater. Most of the puddles are frozen, and many streams and rivers are running too fast for many of the smaller garden birds to access. Remember to check your birdbath regularly and pour some warm water to remove any ice.

Birdbaths should be cleaned out regularly to remove any dirt from the birds that have bathed in there. More so during the Summer when they will bathe more frequently than during Winter time. They do still bathe in Winter so it’s important to keep the birdbath topped up with fresh, clean water that is ice and frost free.

Is Bread harmful for birds?

Bread is not harmful to birds in small quantities, we all need carbohydrates as part of a balanced diet. So bread should only be fed to birds in your garden along with a variety of other bird foods.

Why shouldn’t you feed birds bread?

You shouldn’t feed too much bread to birds because bread to birds is like junk food to humans. It is OK in small amounts as part of a balanced diet, but if all they are eating is bread not only will they suffer from malnutrition, but they will also get fat and possibly be unable to escape from predators.

Is rice bad for birds?

Rice is not bad for birds as such, but too much rice is as bad as too much bread. Too many carbs are bad for us all, birds included. It should only be fed to birds as part of a balanced diet including seeds, mealworms, fruits and other bird friendly foods.

Will birds explode if They eat rice?

Birds will not explode if they eat rice, this is one of those urban myths. But they shouldn’t eat a rice only diet, they should have a balanced diet as should we all.

How often should I feed the birds?

You should feed the birds once a day, at the same time if possible. If you want the birds to visit your garden frequently, you must be consistent in your bird feeding habits. They only have so much energy, and they often build their nests close to regular food sources.

Do birds feed at night?