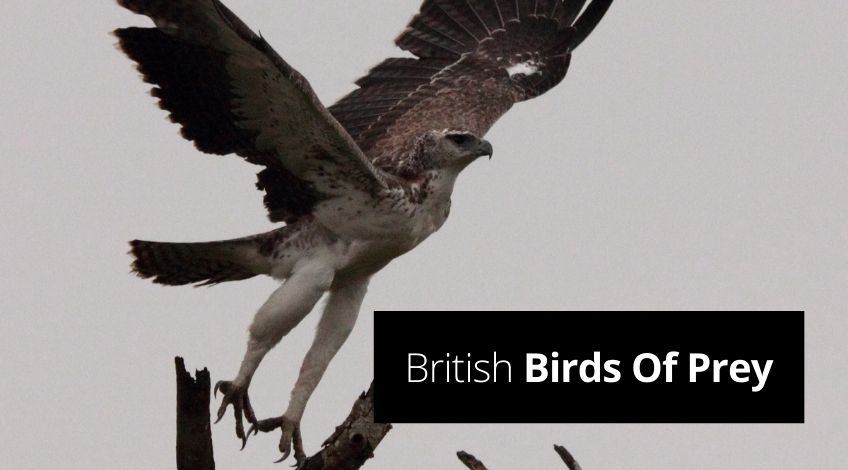 There are a surprisingly large number of birds of prey found in Great Britain, in fact there are representatives from every group of raptors except vultures. This means there are types of hawks, buzzards, osprey, owls, eagles, kites, falcons and harriers.

Birds of prey are raptors, it’s birds that catch their prey with their talons rather than their mouth like most other birds. They have excellent eyesight, excellent hearing, strong feet known as talons, a powerful beak and are able to perform impressive aerial acrobatics.

Apart from some owls, all of the British birds of prey are diurnal (they hunt through the day and sleep at night) the only bird of prey likely to visit your garden is a sparrowhawk. There are infrequent sightings of peregrine falcons in some towns and cities, but the rest usually live in more remote places.

What Do Raptors Eat?

Here in Great Britain birds of prey have a diet consisting of:

The most common hawks in the British Isles are goshawks and sparrowhawks. Goshawks are larger than sparrowhawks, and the easiest way to identify a goshawk is by its red eyes and white eyebrows.

The sparrowhawk is usually seen in woodland or over farmland. Its main prey are small birds. Sparrowhawks have orange eyes, but are most easily recognised by their yellow legs. In many ways sparrowhawks are similar in looks to the peregrine falcon; they both have a barred underside, yellow legs and a greyish back but the peregrine is a larger bird.

Harriers are well known for their low flying as they hunt for their prey,which include small birds, mammals and reptiles. There are 3 harriers seen in the UK they are the hen harrier, the montagu harrier and the largest of the 3, the marsh harrier. Marsh harriers can soar very high but are usually seen flying low over reed beds and wetlands.

Buzzards are probably the most common bird of prey in Britain and are often seen flying high in a V shape formation. They are found in woods,farmland and on moors. Buzzards have dark eyes, a brown body and a large head.

There are a few members of the falcon family that can be spotted in Britain, look out for the kestrel, the hobby and the peregrine.

The kestrel is quite a common bird in the UK, they’re often seen sitting on poles, or hovering in one spot. They prefer open countryside, and are fairly easy to recognise due to their dark tipped wings and chestnut flecked back and pale underside.

The hobby is a small, elegant falcon that only visits our shores from April to september.The hobby enjoys flying over lakes, open ground and low-lying valleys. Hobby’s catch insects whilst in flight.

Peregrines are the largest falcon in Britain, recognisable by their white neck and throat,pale grey back and grey bars on a white underside. Peregrines frequent cliffs and tall buildings and catch pigeons and other birds in flight.

The red kite is a large bird of prey easily recognisable by their reddish body, pale head and forked tail. They have a shrill call which sounds almost like a childs high pitched squeal.

Another large bird of prey, the osprey is a rare sight in the UK. Most likely to be seen on lakes, waterside woods and often perched in big trees standing tall. They hover over water and dive for fish, a spectacular sight to see, but they only visit from April to October.

The magnificent eagle can only be seen in the North of the UK, from Cumbria to Scotland. They are easy to recognise mainly due to their size and their wide open wingspan. The largest eagle in the UK is the white tailed eagle otherwise known as the sea eagle, with its white tail and brown body it’s easy to recognise but only in remote parts of North-West Scotland (see further on in the “The Reintroduction Of White-Tailed Eagles “ section). The golden eagle is a more common sight but more so in Scotland than Cumbria.

Things Could Have Been So Much Different

Another 5 species: The hobby, golden eagle, montagu harrier, hen harrier and red kite had all declined to less than 100 breeding pairs sometime between the beginning of the 20th century and the mid 1970s.

During both world wars the numbers of raptors in the UK actually rose due to the gamekeepers going off to war (they found something else to shoot). But once there was peace in Europe the war on raptors began in earnest, plus peregrine falcons were ordered to be killed by the British government during WWII to protect carrier pigeons.

The viral disease myxomatosis first arrived to the British Isles in 1953, it decimated the rabbit population as it spread from coast to coast, the knock on effect was the decline in buzzards as they lost one of their main food sources. Sadly that wasn’t the only problem, farmers were using broad spectrum chemicals which also helped in the rapid decline of the buzzard and other birds of prey.

Britain lost many of our birds of prey during the 1950s and 60s due to the widespread use of organochlorine pesticides like DDT. Farmers up and down the country used more and more chemical pesticides which spread into the environment and remained for a long time. As they were fat soluble they spread throughout the food chain and concentrated with the raptors.

This caused chick and adult death in all raptors but especially in sparrowhawks and peregrine falcons. With peregrines falling to just 360 breeding pairs in 1963. Thankfully these pernicious chemicals have been banned since 1982 which has helped in the repopulation of many birds of prey.

The Reintroduction Of White-Tailed Eagles

There are now a reported 130 breeding pairs of white-tailed eagles in Scotland with more being reintroduced to other parts of the UK on an almost regular basis. Well, that might be a bit too strong but it’s encouraging to recently read reports of a farmer in Norfolk trying to reintroduce some onto his land. They are also being released in Somerset, Kent and the Isle of Wight. There is also a protected species label on these spectacular birds, with a fine of £5,000 or 6 months in jail for injuring or killing one of these birds, the future’s looking good for the British white-tailed eagle.

What is the most common bird of prey in Britain?

The most common bird of prey in Britain is the buzzard. This is amazing considering they were on the brink of extinction in Britain in the 1960s.

What bird of prey would kill a pigeon?

The birds of prey that would kill a pigeon are Peregrine falcons and Sparrowhawks.

What is the UK smallest bird of prey?

The UKs smallest bird of prey is the Merlin, which is a member of the falcon family and is roughly the same size as a mistle thrush at just 10 inches (26cm) in length.

What is the biggest British bird?

The biggest British bird is the white-tailed eagle AKA sea eagle.