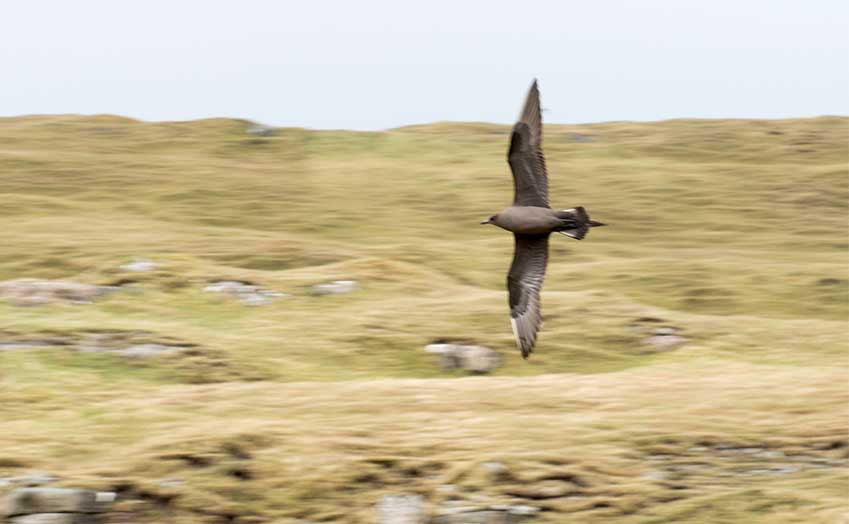 Did you know: That Arctic Skuas are known for their aggressive behavior and will often attack other birds, including much larger ones, in order to protect their territory and food sources? They have been known to dive-bomb and strike other birds with their beaks and talons in order to defend their nesting sites and chicks. In fact, their scientific name, Stercorarius parasiticus, means “parasite scavenger,” referencing their habit of stealing food from other birds.

Arctic skuas are predatory seabirds that can be found in the UK during the breeding season. They can be seen along the northern and western coasts of Scotland, as well as on the islands of Shetland and Orkney.

Arctic skuas are known for their bold and aggressive behavior, often chasing and harassing other birds to steal their food. They are also skilled hunters, preying on a variety of small birds and mammals, including puffins, terns, and young rabbits. Outside of the breeding season, Arctic skuas migrate to sub-Saharan Africa and the coasts of South America.

Arctic skuas are medium-sized seabirds with a stocky build and long wings. They have a dark brown plumage with a white patch on the underside of their wings, which is visible when they are in flight.

They have a distinctive white “eyebrow” stripe above their eyes and a sharp, hooked bill. In the breeding season, male Arctic skuas may develop a reddish-brown breast band.

Arctic skuas can be distinguished from other similar species by their distinctive flight pattern, which involves frequent changes in direction and quick turns. They are often seen flying low over the water in search of food.

If you've took any pictures of a Arctic Skua at a stage that we don't currently have an image of that you wouldn't mind sharing with us, it'd be a great help if you submitted it to us so that the 1,000's of people who rely on these pages can learn more about the Arctic Skua.

Facts About The Arctic Skua