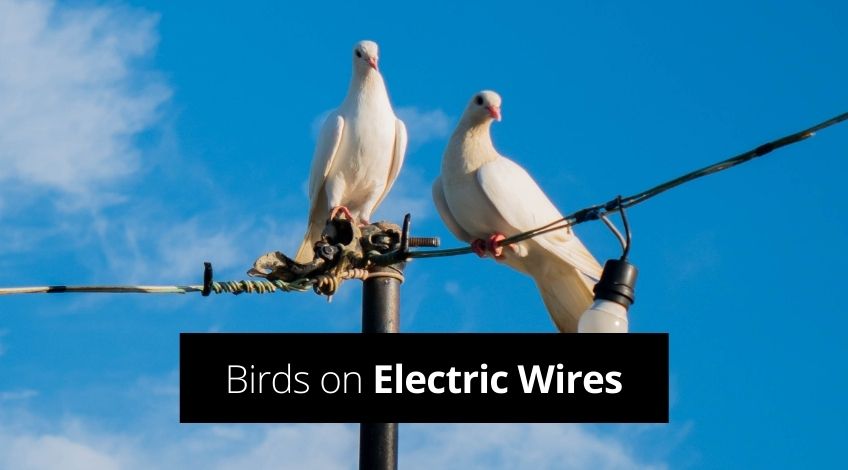 Why Don’t Birds Get Electrocuted on Electric Wires?

When you look up at power cables suspended from pole to pole along the side of the road, there often seems to be hundreds of birds sitting on that wire. But there’s no smoke, no sparks, and no birds dropping to the ground electrocuted.

The Path Of Least Resistance

Electricity flows best through good conductors which is why electricity cables are made from copper because it is a great conductor. The electricity will always travel along the path of least resistance and copper offers much less resistance than birds. So that’s the first reason why birds don’t get electrocuted when perching on power cables.

The second reason for the birds not getting fried by the 35,000 volts of electricity passing through the cable right below their feet is all to do with electrical potential. Scientists say that there is no voltage difference in one single wire. The electrons need a difference in the electrical potential. The energy passes from areas of high voltage to areas of low voltage following the path of least resistance which means the birds will be bypassed because they are sitting on one wire.

If they moved one foot to a wire with a different voltage or if they put one foot on the ground with the other one on the cable, then they’d get shocked. That’s because the bird’s bodies would then become a pathway for the electricity. The electricity would travel through the bird to get the ground or the area of different voltage. This explains why they put power cables so high up with lots of airspace between each cable.

Sadly not all birds got the memo about the path of least resistance, and they went and touched the wire and the pylon at the same time. If you spot a dead bird near a pylon it’s usually a larger bird like a crow or a pigeon. This is because they have a larger wingspan which in some cases get stretched out to touch a pylon while they are standing on a power cable, creating the pathway of least resistance, and the death of the bird.

Another problem that electricity pylons can cause to certain birds is when they have recently been erected in existing bird flight paths. This usually affects swans or migratory geese who use the same flight path year after year. Some unfortunate birds fly into cables and are electrocuted, where these flight paths are recognised the power companies place marker buoys on the cables to make them easier for the birds to see and reduce fatal collisions.

These preventative measures are also helping to lower the number of wildfires in the USA. There have been reports of these large birds causing such a large spread of fire as they fall to the ground electrocuted.

How Do Workmen Work On Power Lines Without Getting Electrocuted?

Electricians working on the power lines, for maintenance etc, use all manner of specialised equipment to keep them safe. They have specially insulated tools, boots and other equipment and they never touch more than the one wire they are working on. In some cases they work suspended below a helicopter to keep from touching the ground. Even with all of the safety precautions in place, being a power worker is still one of the top ten most dangerous jobs in the USA.

How do birds sit on power lines?

Birds are able to sit on power lines and not get electrocuted because they remain on just one wire. If they were unfortunate enough to touch 2 different wires they would die from electrocution.

Why are birds not electrocuted on electricity wires?

Birds are not electrocuted on electricity wires because of electrical potential. Electricity travels along the path of least resistance, which is through copper wires and as copper offers much less resistance than the birds, as long as they remain on only one wire they are safe.

Why do humans get electrocuted on power lines?

Humans get electrocuted on power lines as they are excellent electricity conductors, and as we are connected to the ground (by our feet) the electricity passes through us through the path of least resistance.