What Is A Spotting Scope?

Many people describe spotting scopes as telescopes with higher magnification, others call them monoculars, but whilst they are similar to both, a spotting scope is in a class all of its own.

Why Do You Need A Spotting Scope?

Compared to binoculars, spotting scopes give a much greater insight into bird life. With the added bonus that you will not be disturbing the birds because of the greater distance you are away from them (400 to 500 metres away). Imagine observing rare birds of prey, like peregrine falcons or golden eagles nesting in their nesting environment from around 1000 metres away without disturbing them at all. You’ll be able to watch their nesting habits, feeding habits and all their general daily comings and goings without them ever knowing you are there.

What Do The Numbers On The Spotting Scope Mean?

Just for clarification purposes, a magnification of 40 means that objects that are 40 yards away in the distance will look like they are 1 yard away through the lens. And the lens diameter of 62 means the field of vision is 62 millimeters. The magnification value of 40 is 30x(times) greater than standard binoculars.

What are Typical Magnifications For Spotting Scopes?

What Benefits Does Zoom Magnification On A Spotting Scope Have?

Locating an object is easier using low magnification whilst you can then zoom in for a much more detailed view at higher magnification.

What Price Will A Spotting Scope Cost?

This is much like any other sophisticated technical instrument,top quality commands a top price, somewhere within the region of between £1500.00 to around £2000’00. Those of you who are not sure if bird watching is really your thing, you can purchase a mid-range spotting scope for around £200.00 to £500.00. You really will do well to consider how often you intend using your scope, if you intend to use it regularly, then buying an expensive model makes good sense, whereas if it’s going to be an occasional thing a lower priced scope will suffice.

What To Look For When Buying A Spotting Scope

The main factor to consider when purchasing a spotting scope, is its ability to gather light. The main way to tell its light gathering power is the second number (the diameter of the lens). If you’re going to use your scope under various and changing lighting conditions then a lens diameter of at least 80 should be considered. Basically the larger the lens, the more light that will enter the lens.

What Do The Letters HD And ED Indicate On Spotting Scopes?

Due to the various processes used to produce spotting scopes, various types of lenses, different coatings on the glass, the mounting process, even the fact that some top quality spotting scopes have fluoride to replace oxygen between the lenses to allow special refractive properties.  Even some of the more reasonably priced spotting scopes are using extra coatings etc.

The abbreviations HD and ED are used to identify High Definition glass and Extra low Dispersion glass. Any optical equipment with either HD or ED are of a significantly superior quality, but that quality comes at a price.

Digi-scoping uses a digital camera attached to a spotting scope to take the magnified images through the lens of the scope. Used primarily in bird watching circles, digi-scoping has been around since 1999. The French bird watcher Alain Fossé was the first to coin the phrase, but the original digi-scoper was Laurence Poh, a bird watcher from the Malaysian Nature Society.

Digi-scoping is the latest in a long line of “afocal photography”, which is the practise of attaching the lens of a camera to the eyepiece of a microscope or similar. With the advent of digital cameras many new ways of taking otherwise unobtainable images were created with digi-scoping being one.

What Accessories Will You Need For Your Spotting Scope?

As spotting scopes have such powerful magnification rates, trying to hold them by hand whilst viewing is out of the question. So the question arises, which type of tripod do you need? The best answer is to try the various types out for yourself and see which type suits you best. The options are clearly going to be tripod mounted but then you still need to choose between one of the following 2 choices:

Our advice would be to try out both systems and see which works best for you. Both systems have a locking feature which is very convenient if you want to lock onto a particular bird and show it to your fellow bird watcher.

When buying a tripod for your spotting scope. You are almost spoilt for choice, with a perfectly adequate metal three-legged tripod starting at around the £50.00 mark. And whichever head type you choose either ball head or pan/ tilt head costing between £30.00 to £50.00.

Another factor that needs serious consideration is weight. Depending on the material used to make the tripod, they can add a significant weight to your total baggage. For rigidity, wooden tripods are probably the best, but they can also weigh the most. Whereas aluminium combines low weight with rigidity, but they are easy to damage (usually on erecting or dismantling). Carbon fibre tripods are the best, but that is reflected in the price.

Another point worth noting is that many spotting scopes can fit onto standard camera tripods. So it is possible that you already own a camera tripod that you’re happy with, that might do the job and save you a few quid.

What Is A Spotting Scope Used For?

Whenever you find you need more magnification than is possible on your binoculars, it’s time to reach for the spotting scope. Spotting scopes are used for the following purposes:

Spotting scopes can also be used to take long-range photos on a wide range of cameras.

Why Do Bird Watchers Use Both Spotters And Binoculars – Surely One Is Good Enough?

Not necessarily, spotting scopes and binoculars are used for different purposes. Binoculars have a larger field of view, so they’re handy for scanning the skies, or lakes to spot any interesting birds etc. If that object of interest is in a relatively close range, then the binoculars are the perfect tool for watching with.

But, however, if that object is farther away ( too far for the 10x of the binoculars to cope with), then it’s time to get the spotting scope out. With its up to 60x magnification, the watcher will enjoy a much closer look at the object in view.

If the birds start to fly away, the binoculars will take over again, although, with enough practise, it is possible to follow moving birds with a spotting scope but this does take considerable practise.

What Can Cause Problems When Viewing Through A Spotting Scope?

There are 2 main things that can affect the viewing capabilities of the spotting scope. They are either:

There is a wide gap between low quality or cheap models and top grade spotting scopes. The difference is as far apart as chalk and cheese.  There are many circumstances where a cheap and cheerful model will suffice but there are times when you need a top of the range quality. Unfortunately if you do need top of the range quality, then that’s exactly what you will need to buy.

For most hobbyists a medium priced model will be perfectly adequate to do exactly what is expected of it. By no means are we saying that the only models worth having are the top of the range models. Just steer clear of the bargain basement models, they are cheap for a reason, not always a good reason.

What is a spotting scope used for?

A spotting scope is used for seeing objects much closer than is possible with binoculars. They are popular with bird watchers, hunters, stargazers, and people doing surveillance.

Can you hold a spotting scope?

Using an angled spotting scope allows the use of a lower tripod height. Which allows better stability and is better for digi-scoping. But a straight scope is better for spotting a target or a bird etc. 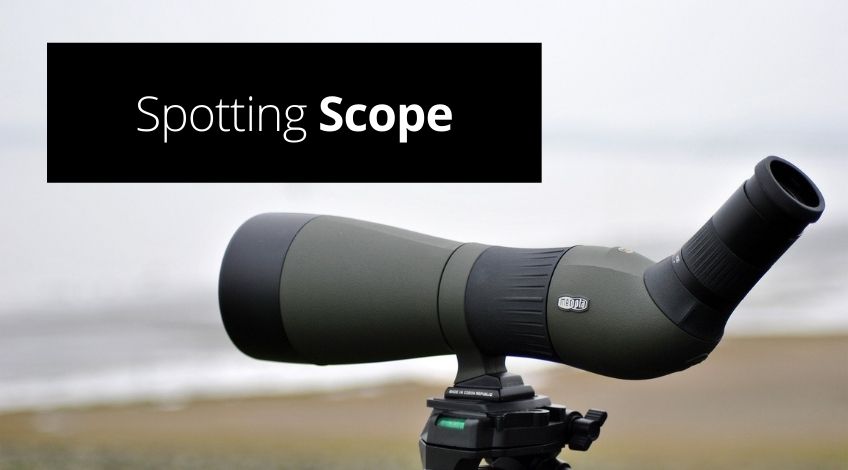 How To Use A Spotting Scope?