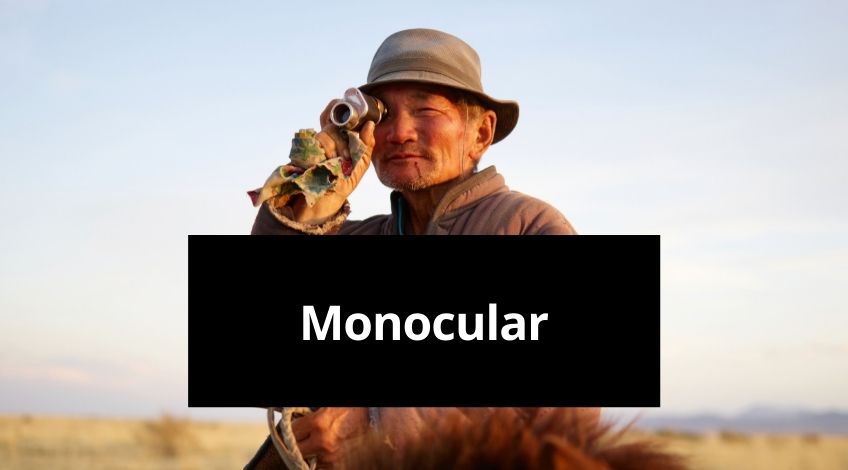 What Is A Monocular?

A monocular is a low powered telescope or spotting scope which is hand held like binoculars but only uses one eye like a telescope. It shares many characteristics with both spotting scopes and binoculars but it is considerably smaller than either. Many monoculars are no larger than your thumb, or as thick as a decent ink pen, and can easily be fitted into your pocket, or purse.

If the occasion is not suited to carry a small pair of binoculars, or a compact spotting scope, there is always the reliable monocular.

Monoculars are really types of telescopes and as such can be described as an optical device that magnifies objects that are some distance away using a series of internal curved lenses and/or mirrors that focuses light (or other infrared radiation) to create an image. Monoculars are smaller in size, lightweight and easy to carry. This makes the monocular much more convenient, less of a struggle to carry, and a very handy piece of kit to own.

Seeing In The Dark (Night Vision)

There are night vision monoculars which allow you to see objects in the dark with a great deal of clarity. This allows you to spot wild predators with no fear of attack. These same monoculars work perfectly well in daylight too. Offering clear vision during the day and at night, and they often have a decent battery life too.

What Do The Numbers Mean On A Monocular?

The numbers imprinted on the body of the monocular refer to the magnification and the objective lens. They are displayed like this: 8×32 or 10×40. The number 8x or 10x refer to the magnification that the lens can supply. For instance 8x means the object is seen 8 times (or 10 times) closer than it actually is. The other number refers to the field of vision which is the area width you are able to see through the monocular.

As the objective lens size is increased, the larger the monocular becomes and the heavier it becomes too. This increase in weight will affect the length of time the monocular can be held steady. So a larger monocular will be harder to keep still, harder to focus and too bulky to carry.

What Are Monoculars Used For?

Monoculars come in many sizes, starting from pen size, pocket size, and so on. There are also many binoculars available in small sizes but many lose quality as the size reduces. This is not the case with monoculars.  So what are monoculars used for? Monoculars are perfect for use whilst:

There are monoculars that are fitted with night vision, thermal and digital which are used by the military, and for police work. Most usually when working on surveillance cases or just searching for criminals in the dark.

Why Are Monoculars So Popular With Outdoorsmen?

There are many reasons to pack a monocular when on a trip outdoors, many hunters and bird watchers wouldn’t leave home without their monocular because;

How Is The Monocular’s Viewing Mechanism Created?

Most monoculars utilize the system invented by Ignatio Porro in 1854. This system was invented for binoculars and works on the principle of a prism and a curved lens. The lens captures light from long distances and amplifies it, whilst the prism inverts the image. Due to the shape of the lens, the image would be inverted if not for the prism. The lens and the prism are the most expensive parts of the monocular generally, and this explains why monoculars are less expensive than binoculars.

Are There Any Disadvantages To Using A Monocular?

If you were to use a monocular for an extended period of time, you are likely to suffer from eye strain. This is because a monocular puts extra strain on the eye using it. This is less likely to happen using binoculars as both eyes are taking the strain. But this eye strain is no more than would be expected using a telescope or a spotting scope.

How Much Will A Monocular Cost To Buy?

With many monoculars being manufactured in Japan, Russia, Germany and China, with the majority being made in China. As for the price, they vary widely with high spec models costing around the £300.00 mark and the cheapest models costing around £10.00 There is a wide range of products and prices, but many good value models seem to be in the £50.00 to £150.00 range.

What’s The Difference Between A Monocular And A Telescope?

This question comes up often, and it depends on the circumstances they are going to be used in. But in many cases monoculars win hands down. For instance:

What is the difference between a telescope and a monocular?

Monoculars are smaller, easier to handle, but have less magnification and a lower objective lens size.

Can you stargaze with a monocular?

You can stargaze with a monocular, a monoculars compact size makes it an ideal optical device for stargazing.

What is a powerful monocular?

A monocular with 12x magnification is considered powerful.