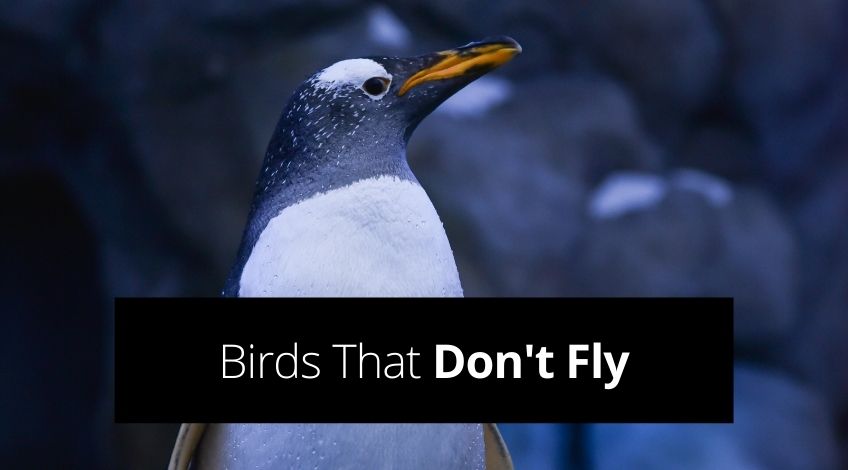 There are 57 recorded species of birds that don’t fly, but that equates to 1000s of actual flightless birds once you include all of the subspecies. There are quite a few large birds that can’t fly and these include:

There are also the domesticated birds that don’t fly including:

Why Do Birds Fly?

Birds fly for a number of reasons including:

Why Are There Flightless Birds?

Over many centuries, birds that have no natural enemies or predators, don’t need to migrate, and have a readily available food supply have evolved to have stronger legs, with larger muscles and shorter almost non existent wings. These birds often develop better bodies for the terrain they are living in. For instance the ostrich is the fastest bird on 2 legs and can sprint at around 45 miles per hour (72km/h). It can run for 10 miles at a speed of 30 miles per hour (48 k/h) and weighs in at 350 pounds (158 kg) with a height of 9 foot (274 cm). They need all of their speed to outrun a hungry lion.

Do Flightless Birds Have Wings?

It seems that as these species stopped using their wings, their bodies changed. This would have taken centuries, but many now have an appendage where their wings would have been, but they are much smaller, and lack many bones and joints that were necessary for flight. Interestingly enough, many of these flightless birds still try to flap these appendages when running. It’s almost as if they have not quite forgotten how to use wings, they just don’t have them as such.

Having seen many bone cast replicas of the T Rex, one of the largest dinosaurs ever to have roamed this planet, we are always reminded of the image of many of the flightless birds that are alive today. Large powerful legs, and small almost useless front limbs where wings, or arms would have been. Of course today’s flightless birds are on a smaller scale than the T Rex and they don’t have the menacing teeth, but the similarities are plain to see.

Where Are Most Flightless Birds From?

Flightless birds are found all over the world but the country with the most flightless species is New Zealand. Up until around 1000 years ago when humans first settled on the islands of New zealand, there were no large predators to worry the wildlife population. No predators along with a wide variety of habitats and flora and fauna was the ideal breeding ground for a wide variety of flightless birds to evolve.

What Are The Dangers Faced By Flightless birds?

The largest danger facing birds who cannot fly is the loss of habitat, followed by predators, and of course humans. Many species of flightless birds are extinct, with over ½ of the flightless bird species in a vulnerable or threatened state. With mankind being largely responsible for their demise.

A List Of Some Of The Flightless Birds Worldwide.

Below is a fairly comprehensive list of the birds that don’t fly. We’ve placed them in their respected genus for ease of reference. Some are already extinct, some are on the verge of extinction and some are still living. Many in relative safety for now.

Among the more than 10,000  species of birds that are estimated to live on this planet, the domesticated birds are not included because these are not truly flightless. They have either had their wings clipped to prevent flight or they have been purpose bred not to fly. They include many types of chickens, ducks and turkeys.

Flightless birds are a really interesting group of birds as they show how animals can develop if left alone for long enough. There are many organisations that are trying to get these birds the protection they deserve, but much more needs to be done to protect their habitats and allow them to exist as they always have.

How many flightless birds are in the world?

There are more than 57 species of birds worldwide that are flightless. This does not include domesticated flightless birds.

What is the biggest non flying bird?