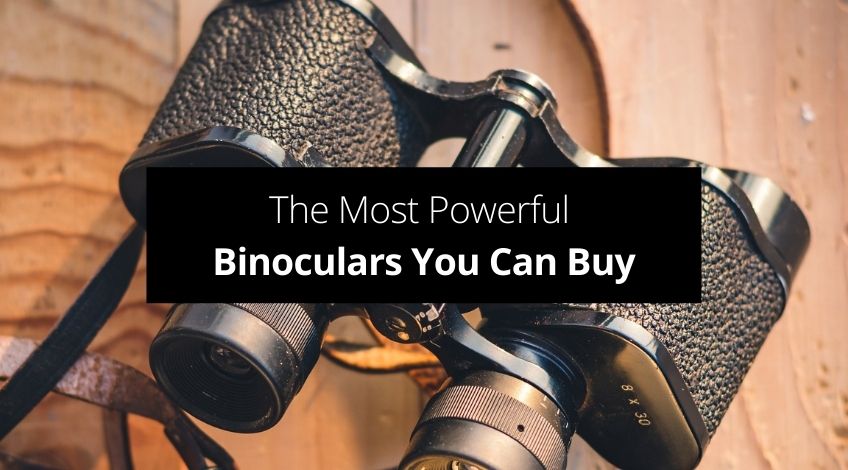 What Are The Most Powerful Binoculars You Can Buy?

The most powerful binoculars available to purchase at this moment in time are the Sunagor Mega Zoom 160 X Binoculars. They boast a 30 to 160x magnification, weigh 1.4 kg (3lb), and have a 70 mm objective lens diameter. As you would expect with such a high magnification, they have a tripod adaptor.

Why Do They Need A Tripod Adaptor?

How Do They Perform?

They are quite a heavy beast and that takes some getting used to, but as they need to be supported by a tripod the weight isn’t that much of an issue. At low level magnification, these bins work adequately well, that is at 30x the image is clear and really quite good. It’s when you start to increase the magnification that the problems arise.

As any serious binocular user knows as the magnification increases, the field of view and the level of light diminish which means you could be close in on something but you’ll be unable to identify what exactly that something is. Also the diopter setting works fine at 30x but once you increase the magnification, you run out of adjustment with the diopter.

We always warn against zoom binoculars unless they have been produced by a reputable company and these just emphasise that point entirely. It’s a shame, as they appear to be Japanese and they do produce some fine optics in Japan, but sadly these aren’t among them.

Are There Any More Powerful Binoculars?

We have been receiving reports of Sakura 20 – 180×100 binoculars for around £20.00 per pair. We suspected, given the price that they would be a disappointment and sadly we were correct. They’re OK for giving to a youngster to play about with, but for a serious birdwatcher/skywatcher they’re really not worth considering.

Why Does Zoom Lens Work On Cameras But Not So Well On Binoculars?

The main problem with creating zoom lenses for binoculars is that a pair of binoculars is basically 2 individual telescopes joined together. Both synchronised to create a clear, sharp image. To maintain that synchronicity when using a zoom feature, both lenses need to move at exactly the same speed and distance. This is achieved by using a flexible linkage band that connects the zoom mechanisms of both lenses.

This system has a certain amount of slack which is intensified due to the amount of parts in the zoom mechanism. This slack makes it impossible to maintain accurate synchronicity which results in the 2 lenses never being aligned which in turn, means the image can be fuzzy.

What About Decent High Powered Binoculars?

Probably one of the only zoom binoculars we would recommend would be the Bushnell LEGACY WP 10-22X50 Binoculars They feature BAK4 prisms, FMC lenses, waterproof, fog proof, 22x magnification, and a 50mm objective lens diameter. All backed by Bushnell’s years of optical manufacturing experience.

Or there are the Yukon Advanced Optics Solaris 20×50 WP Binoculars complete with 20x magnification, 50mm objective lens diameter, waterproof, and a rubber coated body and all for less than £120.00

Which Is Better Zoom Binoculars Or A Spotting Scope?

There are reasons to support both arguments here, and we’ll get into them below so you can make an informed decision. As we’ve already established, zoom binoculars do leave a lot to be desired unless you’re prepared to pay high end prices for a really trustworthy brand. But let’s look at some facts and figures and compare scopes to zoom bins.

Spotting scopes are great for many outdoor activities where a high magnification capability is needed. They are larger and more difficult to transport than a hand held pair of binoculars and they will need a tripod, but so will zoom binoculars. Scopes are available in a range of sizes, however, that level of optical excellence does come at a price.

On the whole binoculars are far easier to transport than scopes but zoom binoculars are heavier and larger than standard binoculars. They have a far lower magnification range even with the zoom capability, but they offer a wider field of view, stereoscopic viewing, less weight, and less eye strain due to using both eyes at once.

As you can see they both have good and bad points, it ultimately depends on the task you intend them for and of course your personal preference. Here are a few questions to consider before making your choice.

When it comes to the most powerful binoculars, there are many factors to take into consideration. For instance with hand held binoculars anything higher than 10x will result in a blurred image due to the exaggerated shake we all have but is only visible under high magnification. Any magnification above 10x will need a tripod or some other form of support, which implies they’re no longer quite as portable as you would imagine them to be.

To illuminate the image the binoculars need a large objective lens diameter, as the size of the objective lens increases, so does the overall weight of the binoculars. Then we enter the world of zoom binoculars, many of which are sketchy at best. Most of the top brands limit their zoom capability to a maximum of 22x. We find this to be very telling, it takes a long time to achieve a good reputation in the world of optical enhancement, and seconds to lose it.

They’re not going to risk their hard earned reputation on an inferior product. Added to which the technology and weight of glass needed to create a zoom optics for binoculars is expensive. Especially if you want to get it right.

So when considering the most powerful binoculars it’s not all about magnification. Of course the magnification is important but there’s no point having high magnification if the image is unrecognisable. You need to consider the size of the objective lens, the field of view, and the exit pupil before you can tell if that particular pair of binoculars will be powerful enough for your needs.

What Is The Objective Lens & Why Does The Size Matter?

There will be a series of numbers separated by the letter x, the number up to and including the x indicate the level of magnification with the x signifying multiplication. The numbers after the x indicate the size of the objective lens diameter in millimeters. So a pair of binoculars with 10×50 stamped on the body have 10 times magnification and an objective lens diameter of 50mm.

What Is The Field Of View?

The field of view (FoV) is the width of the image you can see at a set distance. For example a FoV of 105m@1000m indicates that you will be able to see a width of 105 metres from a distance of 1000 metres . Anywhere between 105 to 140m per 1000m is considered good when it comes to FoV for binoculars.

What Is Exit Pupil?

To calculate the exit pupil just divide the objective lens diameter by the magnification, the result is the exit pupil in millimeters. To use our earlier example of 10×50, 50÷10=5 so a pair of 10×50 binoculars have an exit pupil of 5mm.

Which binoculars are most powerful?

The most powerful binoculars are the Sunagor Mega Zoom 160 X Binoculars which offer 160x magnification.

What is a high power for binoculars?

A high power for standard binoculars is around 20x.