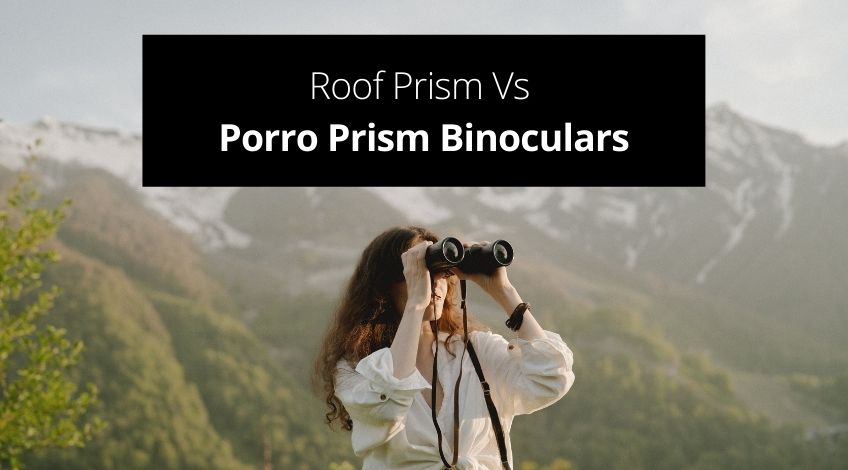 This is one of those questions we get asked fairly regularly here at Binocular Base, and in all honesty, it’s a difficult one to answer. They both have their pros and cons, and it really is a matter of personal choice. So we have decided to lay all of the facts out in front of you, to help you to make an informed decision.

Most people are familiar with binoculars but we’ve decided to start at the very beginning and work forward from there. Put in simple terms, binoculars use various lenses, prisms and other elements to produce a magnified and illuminated image of whatever object you direct them towards.

By the use of 2 parallel tubes with lenses and prism arrangements enclosed, the user can observe with both eyes simultaneously. This gives the user a clearer sense of depth and an almost 3D type image. As opposed to telescopes which use only one eye while keeping the other eye closed.

We all talk about Porro prisms and roof prisms, but what exactly are prisms? According to Dictionary.com[1] a prism is;

For usage in binoculars we take the first definition concerning optics. Which is probably a fine definition but in plain English, a prism is a block of glass that takes on the role of a mirror. Or acts like a mirror, it is not a mirror because the prisms used in binoculars have no reflective backing.

The prisms work to produce an image by bending the light, they reflect the light entering through the objective lens (the larger lens, the one closest to the object you’re looking at), then amplify the image that is then sent to the eye piece (ocular lens, the smaller one you look through). But that’s only part of what prisms do, they also invert the image (as it would appear upside down if not for the prisms) so you see the image magnified and the correct way up.

What Are Porro Prism Binoculars?

Porro Prism binoculars are named after their inventor Ignazio Porro, who first developed this type of binoculars in Italy in the 1850s. His design has stood the test of time because it’s the same design still used to this day.

They operate by sending the light that enters through the objective lens through a pair of slightly offset prisms. It’s the movement between the prisms that acts to amplify the image and also invert it and it then travels through to the ocular lens.

Porro prism binoculars are easy to identify due to their offset shape (to house the offset prisms). Which gives them a similar appearance to a capital M. As the arrangement of the prisms takes up considerable space, Porro prisms are larger than roof prism binoculars. They are also heavier and due to the shape, harder to completely waterproof. On top of which the offset prism arrangement is easy to knock out of alignment which can be undetected but will lead to eye strain which in turn leads to headaches and migraine.

Having listed their failings, it’s only fair to list their advantages too. Porro prisms have a higher light transmission rate, better depth perception, a wider field of view, and cost less for higher quality binoculars compared to roof prisms.

With all that’s been said about porro prism binoculars we couldn’t leave the subject without a quick mention about reverse Porro Prism binoculars. These are far more compact than regular Porro prism binoculars, the design allows for great waterproofing and anti-fogging plus they are lighter and easier to carry/pack.

The downside of reverse Porro prism binoculars is they are the largest of the compact types of binoculars, they also have the objective lens too close together which reduces the stereoscopic view, which in turn, affects depth perception. Which is one of the main strengths of regular Porro prisms.

The Pros And Cons Of Porro Prism Binoculars At A Glance

What Are Roof Prism Binoculars?

Roof prism binoculars were invented around the beginning of the 20th century . Most roof prism binoculars use one of two prism designs either the Abbe-Koenig prism named after  Ernst Karl Abbe and Albert Koenig and patented by Carl Zeiss in 1905. Or the  Schmidt-Pechan prism which were invented in 1899. Both types have objective lenses that are roughly in line with the ocular lenses.

They look like a capital H, having two straight, thin lens tubes joined by a central focussing knob. Due to the positioning of the prisms (as the name suggests in the roof of the lens tube), roof prisms are narrower and far more compact than Porro prisms. Roof prisms produce an image which is around 12 to 15% duller than similarly sized Porro prisms.

Roof prisms also need a tighter alignment of optical elements which is termed “collimation” this adds to the already higher expense needed to produce roof prism binoculars. But once the prisms are set in roof prisms, they won’t need re-collimating, unlike Porro prisms which need re-collimation after the slightest of knocks.

Roof prisms also require a special coating to bring the images into phase which is a complicated way of saying that once they’re coated the image you see through the ocular lens is the true image not a split image that reaches the eyes at different times.

Due to the design of roof prism binoculars, they are easy to waterproof and fog proof. This is because all of the necessary components for focussing etc can be easily sealed inside the body of the binoculars. Something that is much harder to achieve with Porro prism binoculars.

Roof prism binoculars are designed to take a rougher handling than Porros and this makes them a great choice for travelling. Another plus for travelling with roof prisms is the size and weight advantage they have over Porros. But as we said earlier that useability comes at a cost.

The Pros And Cons Of Roof Prism Binoculars At A Glance

A Direct Comparison Of Porro And Roof Prism Binoculars

Which Prism Glass Is Best?

We can’t do a fair comparison without mentioning prism glass, this will often be mentioned on the binoculars box but unless you understand the differences, it means little or nothing. You will often notice BAK-4 or BK-7 prism glass, but what does that mean and which is better?

This is the coding for Barium Crown glass and it’s widely considered to be the best type of glass for making prisms. It has a high refractive index and a lower critical angle which basically means it transmits light better, with less light loss due to internal bubbles trapped in the glass due to the manufacturing process.

BK7 is used more often in binoculars than BAK-4, it might have slightly lower quality than BAK-4 but it’s still an optical glass with superb light transmission properties and a few internal imperfections. The imperfections that are present are so small as to be of no influence or worry at all.

How Can You Tell Whether Your Binoculars Use BAK-4 or BK7 Glass Prisms?

The easiest way to tell which glass your binoculars prisms were constructed from is to turn the binoculars upside down. Look through the objective lens at arm’s length and look at the exit pupil.  If the image has squared off sides to the general roundness of the image then they have BK7 prisms. If the image shows a true round exit pupil, this indicates BAK-4 prisms which means your binoculars have better light transmission and complete edge to edge sharpness of image.

If after reading all of the facts and figures you’re still undecided on which type of binoculars to buy, it’s hardly surprising. They both have their good and bad points, so it really comes down to what activities you plan to use them for. So let’s look at them from an activity point of view.

Which Type Of Binoculars Are Better For Which Activity?

Marine binoculars are usually rubber coated to protect the casing and to stop the binoculars from rolling around. They are also waterproofed, fog proof and many will float if dropped into the water. But it still pays to invest in a floating strap which wraps over the binocular straps and keeps the binoculars afloat if you were to drop them over the side of the boat.

Marine binoculars tend to be more expensive than regular binoculars  but if you are a regular boat user they are well worth investing in.

As you can see. There are as many similarities between both of the main types of binoculars as there are differences. We are confident that whichever type of binocular you ultimately choose, they will give you many years of viewing pleasure.

Which is better: a roof or Porro prism binoculars?

Roof prism and Porro prism binoculars have both positives and negatives. At the end of the day, it boils down to personal preference.

What is the advantage of roof prism binoculars?

How many prisms are used in Porro prism binoculars?

There are 2 pairs of prisms in each lens tube of porro prism binoculars.

What is Dach prism?

Dach prism is the German name for a roof prism.