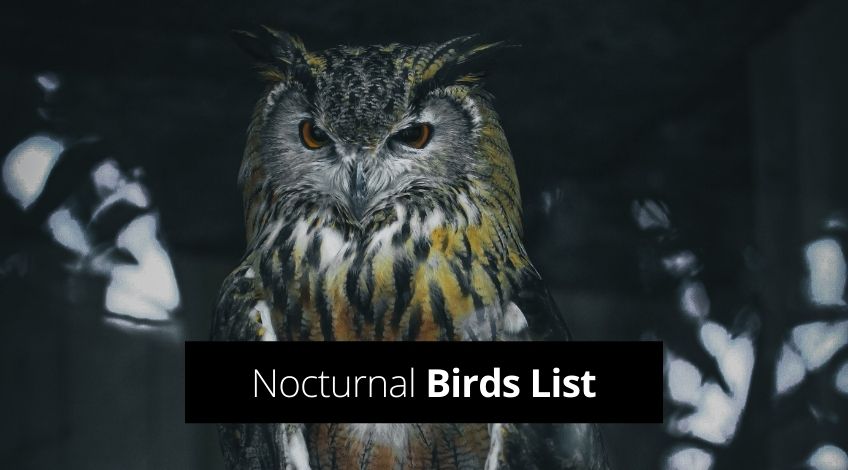 Nocturnal birds are usually dull coloured with hardly any visible markings because at night any bright coloured markings would be difficult to see. They also have larger eyes compared to diurnal birds to allow as much light as possible to enter their retinas. More often than not, we hear nocturnal birds rather than see them.

What Are The Characteristics Of Nocturnal Birds?

Nocturnal birds differ from diurnal (daytime) birds in a number of ways, these include:

Many birds that are busy all night catching food and doing their best to provide for their offspring, act far differently in daylight. If they realise they might be spotted they freeze, trying to blend into their surroundings and not get detected by moving. They might appear to be calm and almost tame, but this is their way of defending themselves and their nests and any eggs or chicks.

If you spot a nocturnal bird during the day, you should keep away from it to allow it to get the rest it needs before it goes on the hunt again at night. Generally, if a nocturnal bird has its eyes open in daylight, it has probably already heard you coming, so turn around and give it some peace and quiet.

How Do Nocturnal Birds Act At Night?

Nocturnal birds do pretty much exactly what diurnal birds do during the day, only they do it at night. They will either hunt or forage for food, preen themselves, act out their courting moves, find a mate, get busy building nests, and whatever else they need to, to survive. Then during daytime hours, they perch, rest and sleep just as their diurnal cousins do at night.

At certain times of the year, typically Spring and Autumn, there are more birds active at night than usual. During Springtime the early morning birdsong or dawn chorus might start about 2 hours before first light. That will be the diurnal birds trying to attract a mate and find new territories.

During periods of full moons, or if they’ve perched near street lights,  they may even start singing at night. During Autumn many diurnal migratory birds might start their journeys under cover of darkness to avoid daytime birds of prey. These clever birds also use star patterns to guide them in the correct direction. As these birds are only active at night for short periods, they are not classed as nocturnal.

Birds That Announce The Dawn Chorus

The dawn chorus is usually triggered by the first light of day combined with the internal clock of certain birds. In the UK the usual order of birds singing in the dawn are robins and redstarts, followed by sparrows and finches. Then at dusk they usually reverse the order with the sparrows and finches starting first, followed by the redstarts and robins. It is said that birds start singing in the pre morning light because they wake up and it’s too dark to do anything else but sing. Plus they are in less danger of their predators being able to spot them either.

This can be a challenge but it can also be fun. Keep in mind that areas that you know well in daylight look totally different at night. Be sure to remain as quiet as you possibly can and don’t disturb any birds if you can help it. Remember, you’re having fun, but the birds are trying to survive. Your loud stumbling presence could cause a nocturnal bird to not get enough food for himself or his family, so take care.

Identifying birds in the dark can also be challenging, and it takes lots of practise and plenty of patience too. What birds can you spot at night? Do let us know in the comments section below.

Which Diurnal Birds Are Most Likely To Be Singing At Night?

Of all the birds that fill our skies every day, there is one in particular that will sing at any time of the day or night. All this bird needs is a full moon, a street light or a security light to come on near his territory and he’ll start singing no matter what time it is. That bird is the robin.

Robins feed mainly on insects and are used to foraging in dim lighting conditions. As the robin is such a territorial bird, and as they are with us all year, you are more likely to hear a robin sing at night than you are to hear the song of the nightingale.

Other than security lights or any of the other light sources mentioned so far, robins can be triggered into singing by loud noises. So fireworks, thunder, bomb blasts, earthquakes and even nocturnal birds singing can start the robin off. The robin is afterall, a distant cousin of the nightingale so it’s no wonder it will sing to them.

Habitats Of British Nocturnal Birds-Where Can You Spot Them

The majority of the nocturnal birds of the British Isles are by their very nature secretive, shy birds. And for good reason, if you would like to spot any of our native night birds here are their best known habitats.

These birds usually frequent areas of moorland, heathlands, recently cleared conifer plantations and in open woodlands. You’ll have the best chance of spotting them in Southern England, with large numbers in Thetford forest in Suffolk, the New forest, Dorset and the Surrey heathland.

Nightingales are hard to spot as they like to hide in thickets or the middle of thick bushes. They mainly breed in the UK to the South of the river Severn, and East from Kent to Dorset. With the highest numbers to be found in Sussex, Kent, Norfolk, Suffolk and Essex.

The reed warbler can be found in estuaries, alongside lakes and rivers hiding in reed beds. They are concentrated in lowland central and Southern England and Wales.

The corncrake is usually found in lowlands but can also be found high into the mountains where fens, bogs, and marshland exist throughout Europe but in the UK they are mainly found in Scotland and Ireland.

These birds can be seen in many areas but they tend to keep away from upland areas. You’ll be most likely to spot a water rail in Eastern England and along the South coast.

These water birds are to be found in ponds, lakes and marshland. There are plenty of these worldwide but in the UK there have been sightings of less than 20. To spot the black crowned night heron, try Somerset.

Woodcocks can be found in Summertime throughout the UK apart from South-West England, during Wintertime they are widespread in lowland areas. They prefer woodland and heathland.

Stone curlews are to be found in the Brecks in Norfolk and Salisbury plain Wiltshire They can be spotted on heath and downland.

Curlews can be found around the whole of the UK coasts with the largest numbers seen at the Solway firth, the Wash, The Dee, Severn, Humber and Thames estuaries and Morecambe bay.

Sedge warblers are found throughout the UK, and can be spotted in damp wetlands and reed beds in Summer early in the morning and close to dusk.

Barn owls can be spotted in grasslands, agricultural fields, forests and towns and cities, throughout the UK.

The only place in the UK where these magnificent birds have been spotted is North Yorkshire, on ministry of defence land.

Not a true resident of the British Isles, but snowy owls have been spotted here over the past few years. Even as far South as Norfolk so you might get lucky.

Tawny owls can be seen all over the UK, They prefer woodland and farmland, but have also been spotted in urban areas too.

Long eared owls are residents throughout the UK hiding in thickets hedgerows and coniferous woodlands.

Short eared and true owls are mainly found in Scotland and Northern England on wetlands and coastal marshlands.

Are owls the only nocturnal bird?

No, owls are not the only nocturnal bird, in the UK we have the nightingale, the night jar, plus many water birds that are nocturnal too.

Why are the birds chirping at 3am?

The birds are chirping at 3 am because they are awake but it’s too dark to do anything else.

What is the first bird to sing in the morning?

The first bird to sing in the morning is the robin.