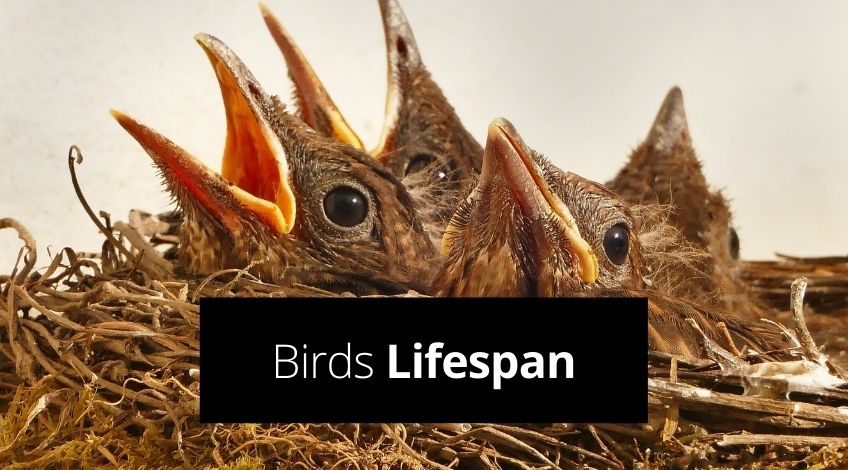 How Long Do Birds Live?

As there are many species of birds, and as they come in all shapes and sizes, there is no “one size fits all” answer to this question. Most common garden birds here in the UK have a life expectancy of between 2 to 5 years. The Blue Tit, for example, has a 2.7 year life expectancy, but there is fully documented, recorded evidence that a particular Blue Tit lived for more than 21 years.

The oldest ever recorded UK bird was a Manx Shearwater that lived for 52 years. We need to take into account the area where the bird lives, as this can make a huge difference in life expectancy.  Magpies for example, have a life expectancy while living in the countryside of 2.3 years, but those living in towns or cities tend to live longer, on average 3.8 years.

How Is The Age Of Birds Determined?

Here in the UK wild birds are ringed to track their migratory routes etc, but as a consequence their age is also recorded. This works best for common birds as we can obtain the results from large numbers of birds which helps us to obtain an accurate estimate.

Which Factors Are Relevant In Determining A Wild Birds Lifespan?

There are a few factors that will help to determine the lifespan of wild birds, these include:

How Long Birds Live By Type

As there are many types of wild birds, and as we tend to categorize them into various groups, let’s look at their average lifespan group by group.

There are many songbirds seen in the UK. Some are common and some are quite rare, but not impossible to see at certain times. Either due to being blown off course by strong winds or by some other reason (check online sites for rare sightings in your area).

Starlings live on average for 2 to 3 years but there have been a few record breakers that have lived for 15 years and one even reached the age of 22 years.

These cute little songsters live on average for 2 years, but the longest recorded lifespan was 14  years.

Warblers are expected to live for 8 years in the wild, but there is not enough data for any outliers as yet.

Blue jays can live to be 7 years of age in the wild, again there is not enough recorded data as yet for any more information.

Finches have an expected lifespan of around 2 years.

The house sparrow has an expected average lifespan of 3 years in the wild.

Like the house sparrow, the song thrush has a 3 year life expectancy.

Despite many council’s efforts to demonize the humble pigeon, they have a life expectancy of around 3 years along with their cousins the dove.

We don’t have too many birds of prey in the UK but here is a look at the average life expectancy of the few that do survive here.

These quiet, unassuming, peaceful birds are ruthless when it comes to the kill. They average 15 years lifespan but there have been recorded examples of 29 year lifespan.

Peregrine Falcons have a 6 year average life expectancy but in North America, there is a record of a peregrine falcon living beyond 19 years.

Ospreys have an average life expectancy of 9 years in the wild. The oldest osprey on record is 25 years.

Sparrow hawks are a common sight along the sides of motorways and main roads up and down the UK, they tend to live for around 4 years.

The Golden Eagle has been slowly making a recovery in the mountainous regions of the UK. They have an average lifespan of 23 years, but there is one on record surviving for over 31 years.

Walk along many of our coastal regions and you will often spot a variety of birds on or around the beach and waters edge.

The Heron usually lives for around 15 years in the wild, but there have been some that have lived for 24 and a ½ years.

Ducks are frequent visitors (or even residents) to many ponds and water courses in the UK, their average life expectancy is around 3 years but the record is over 27 years.

These visitors from the North live around 25 years in the wild, and the record for the oldest Canadian Goose is 33 years and 3 months.

Other Birds Not Covered By The Previous Headings

There are other birds that are often seen in the UK  that are not a part of any of the groups mentioned so far these include:

Although these large birds are not indigenous to the UK, many have escaped from farms and set up small colonies in the wild. They have a life expectancy of 3 to 5 years in the wild.

These birds have a surprisingly long life expectancy in the wild, often exceeding 14 years of age.

The common raven is the king of scavengers. Their average lifespan in the wild is anywhere between 10 to 15 years, but there is a recorded lifespan of 22 years or more.

Country cousins to the raven, the crow lives between 7 to 8 years.

The albatross can live for 50 or more years in the wild.

Aging birds by checking out their rings is the only way we have of telling their ages. However, it’s not really that accurate. Unless they are ringed straight out of the egg, how can their age be calculated,  And if they were ringed straight from the egg the ring would be too tight as the bird grew up.  Plus if the bird was touched or if someone even went near the nest, the adults would flee.

So the only way we can ever tell a bird’s age accurately is if it’s been born in captivity. Then of course the survival rate would be false as it would have been fed regularly by whoever had kept it in captivity. Plus birds in the wild lead very different lives to birds kept in captivity.

So ringed birds are assumed an age when caught and ringed, and then that assumption follows that bird all through its life. So we can assume that wild birds live longer than we estimate, unless they meet an untimely end via a predator.

Many of the above can be linked together like Certain conservation measures create habitation loss which leads to a lack of food, a lack of suitable breeding sites, and often environmental disasters. In many cases, once man gets involved in trying to make things better, they often become worse for other animals. By trying to create the right environment for certain species, they create the wrong environment for other, indigenous species.

Some adapt and survive, but others suffer. Sometimes the best solution would be for mankind to stop interfering in the natural world.

How long does a sparrow live in the wild?

Sparrows generally live between 5 to 7 years in the wild.

There have been  unconfirmed reports of Macaws living to be 100 years old.