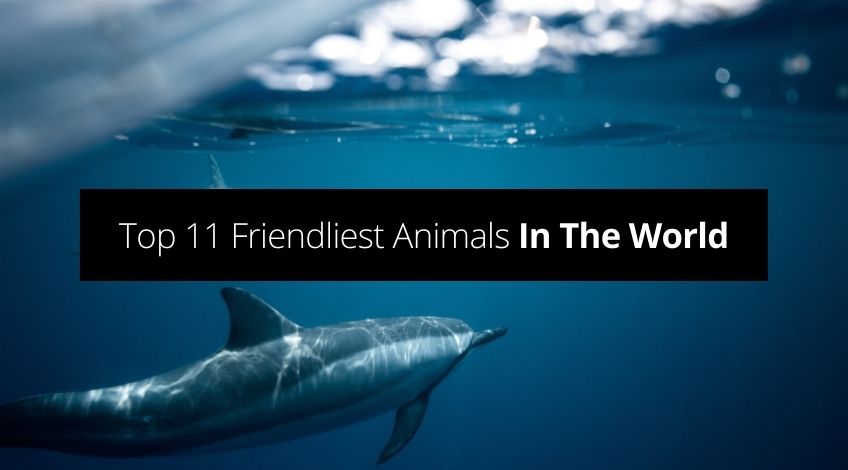 Top 11 Friendliest Animals In The World

There are more than two million species of animals on this planet but not all of them are friendly. There are ferocious man eating animals, others that will only attack if they feel threatened and there are a surprising number of animals that are friendly to humans. Below we’ve listed the top 11 friendliest animals in the world in no particular order.

For our intents and purposes we mean the animals that are most likely to get on with humans under normal circumstances. Surprisingly enough, one of, if not, the friendliest animals to humans is a member of the rodent family. But we’re getting ahead of ourselves.

The Friendliest Animals Dwelling In Water

There are three water dwelling animals that have earned a place on this list which are all incredibly friendly with humans. Of course they are wild animals and should always be respected as such. Just because they’re friendly, doesn’t mean we should treat them in any way unkind.

Dolphins are incredibly intelligent, and well known for their cooperative behaviour and their social skills. They like to be around other types of water mammals and humans who venture into their world too. Dolphins will play and generally interact with divers and swimmers.

They frequently follow ships and other smaller boats and amphibious crafts and are especially prevalent in and around the waters of Iceland. In many parts of the world swimming with dolphins is used as a therapy for many conditions. Such is the friendliness of dolphins to humans.

Beluga whales, also known as white whales, are common around the Arctic and sub-arctic waters. They are one of only a handful of whales that spend time with others not of their own species, including humans. Although they have been known to eat seals, sea lions and other aquatic mammals there are no recorded cases of Beluga whales ever attacking humans.

A free diving competitor was rescued by a Beluga whale after she became distressed during a competition in 2009 by pushing her towards the surface. The name Beluga comes from the Russian word bielo which translates to white.

These gentle giants are incredibly friendly animals, but that’s a bit of a problem for them. Also known as sea cows, manatees are on the endangered species list due to their friendly and trusting nature. While there are reports of them enjoying having their bellies rubbed by human swimmers, this could endanger them even more.

Because they will assume that all people are friendly which is sadly not the case, which is why it is illegal in many places to enter the water if manatees are present. There is however, one place where it is legal to swim with manatees and that’s the Crystal River area in Florida.

The Friendliest Animals Dwelling On Land

The rest of this list are all land dwelling animals, some won’t be a surprise at all. But we think there are a couple that might just be a complete shock. Let us know what you think in the comments below. Let’s start with the domesticated animals and see where we progress.

Ok, we know, not all dogs are friendly and they’re descended from wolves which are definitely not friendly to humans (unless you count Tarzan). But on the whole, dogs are loyal to their owners, meet you with a wagging tail and just go completely overboard when you get home. They even have the nickname of man’s best friend, and the majority of the time that’s exactly what they are.

There is very strong evidence that dogs were first domesticated  somewhere between 14,000 to 29,000 years ago. Which makes the dog our oldest animal friend, even if they were more wolf than dog.

Cats are on the whole, very independent creatures, but with that said, cats were revered by the ancient Egyptians. Records suggest that cats were first domesticated around the year 7500 BC.

It is estimated that there are 220 million cats living within peoples houses worldwide in 2021, with at least 480 million stray cats as well.

The Tonkinese cat which is a cross between Siamese and Burmese cats are supposed to be the most friendly cats. They have a very playful disposition, are inquisitive and like to be around people. The problem with this is, they can become fraught if left on their own for extended time periods.

One of the most friendly and loving animals in the world is the domestic rabbit. Not to be confused with the wild rabbit (from which they all descend) domestic rabbits have been living with people since the middle ages. Originally bred for their meat and fur, rabbits gradually became more and more domesticated due to selective breeding.

An unusual choice for a pet really as they are generally nocturnal in the wild, rabbits need social interaction, lots of exercise and entertaining activities. They also like plenty of human interaction, picking up and stroking etc. A domestic rabbit has a life expectancy of between 8 to 12 years whereas a wild rabbit is lucky to reach the age of 2 to 3 years.

Also known as the Cavy or domestic cavy, the guinea pig is a type of rodent. Guinea pigs aren’t pigs nor do they come from Guinea in fact they originated in the Andes in South America. Originally kept for meat, the Guinea pig lives for around 4 years.

As they are easy to care for, have a quiet nature and respond well to human interaction, Guinea pigs have become a popular pet in Western society. Guinea pigs grow to around 8 to 10 inches (20 to 25cm) and weigh an average of 1.5 to 2.6lb (700 to 1,200g) making them the ideal pet for children to handle.

Probably the most valuable animal in the history of human development, the horse has been domesticated since around 4,000 BC. Horses are known to have been widely bred in Ukraine and Kazakhstan 3,500 years ago. In the human world, horses are used for work, leisure and sports, where in equestrian events a high level of communication between horse and rider is essential.

Aside from the regular cart drawing, cavalry carrying and regular working activities, horses are also used in the world of therapy. People with physical and mental disabilities often obtain therapeutic results when interacting with horses. They have even been used in prisons to calm offenders and reduce violent outbursts.

First domesticated in the area known today as Iran somewhere between 11,000 to 9,000 BC. Despite the fact we take their babies away from them, sheep are very human friendly animals. Baby sheep which are known as lambs are probably the cutest domesticated farm animal in the world.

Although almost always considered to be wild animals, there are many recorded cases of monkeys becoming very friendly to humans. Mainly due to their intelligence, if a human offers a monkey some kind of delicious food stuff they will look out for that person in the future. Depending on the type of monkey some species can live to be over 60 years of age.

According to scientists and evolutionists humans are all descended from monkeys. There are some people that keep monkeys as pets and others that use monkeys as a source of income. Some of the smaller monkeys (capuchins and similar) are used as service animals to assist quadriplegics and other people with spinal injuries or issues with mobility. These helper monkeys are trained for up to 7 years and are able to be active helpers for between 25 to 30 years.

This massive member of the rodent family is the most friendly of all animals towards human beings. Indigenous to Central and South America, and living mainly in wetlands and swamps, capybaras can grow up to 2 foot (60cm) tall and weigh up to 143 lb (65 kg). Their main food source is grass with an adult eating up to 8 lb (3.6 kg) of grass each day.

Excellent swimmers, capybaras need plenty of water to hydrate their naturally dry skin. Capybaras are sociable and easy to train and so make great companions to everyone in their proximity. Capybaras live in social groups of between 10 and 30 and they have an average lifespan of 8 to 10 years in the wild with captive capybaras living in excess of 12 to 15 years.

What Do You Think?

What is the most friendliest animal on earth?

The most friendly animal on earth is often considered to be the capybara from Central and Southern America. This large member of the rodent family is a sociable, easy to train creature that enjoys the company of human beings.

What is the most friendly pet?

There are two main candidates for the friendliest pet, either dogs or cats. Not that they’re always friendly to each other.

What animal kills humans the most?

The animal that kills the most humans is the mosquito, responsible for over one million human deaths every year.

Are humans the deadliest animals?