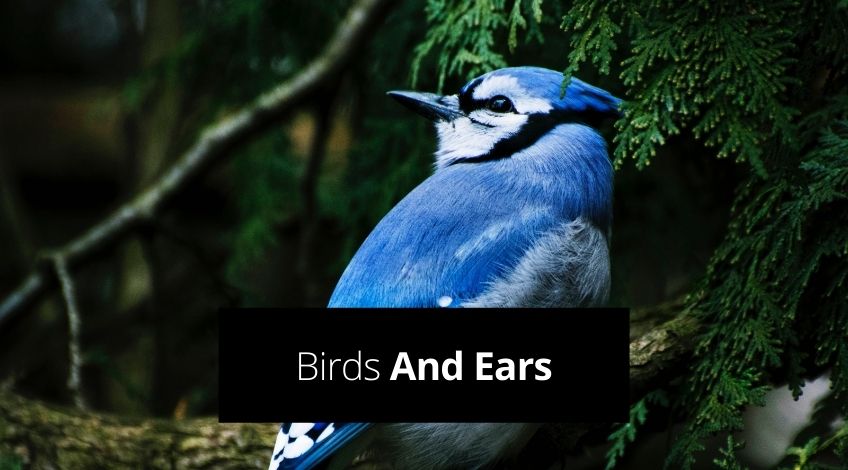 Do Birds Have Ears?

Yes, and no, birds don’t have ears like we have ears (even though like us they have an outer ear, middle ear and an inner ear) their ears are just funnel shaped openings. They have one on each side of their heads and they’re located slightly below and behind their eyes. We can’t see a bird’s ears because they are covered with special soft feathers known as auriculars. These feathers run from the side of the eye and down to cover the ear opening.

The auricular protects the ears and cuts down on the excessive noise the air makes when the birds are flying. Where we have visible ears that direct sound into our ears toward the eardrum, birds use frequencies to determine the direction of sounds.

Not All Birds Ear Shapes Are The Same

The obvious difference to the ear shapes in birds is the owl. Owls have concave discs on their faces that direct sounds to their ears.They can alter the shape of that disc using facial muscles that have been adapted just for this purpose. Plus the beak is shaped downwards on an owl which increases the surface area that collects the soundwaves.

Not All Owls Ear Shapes Are The Same

There are particular species of owls with ears set unevenly on the sides of their heads making one ear higher than the other. This aids in hunting for prey in complete darkness, the owls can tell exactly where the sound is coming from, even in the absence of all light.

The signals sent to the brain of these nocturnal birds of prey whether they be up, down, left, right, behind or in front are translated at high speed giving the owls rapid speed to catch their prey. This is particularly true in great horned owls and barn owls.

But there are other owls too that have what appear to be ears on the top of their heads. These are in fact, skin protection covering the ears and known as tufts. These tufts have nothing to do with hearing at all, and are used for display and visual communication. They also seem to be used as camouflage by distorting the bird’s outline against its background. They have been observed using these tufts as a threat making the owls seem to be larger than they actually are as a defensive measure.

Birds Head Shapes Assist In Their Ability To Hear

Birds Ears And Eyes Work Together To Evade Predators

As a bird’s eyes are on the sides of their heads, which allows them an almost 360 degree field of vision, and their ears can determine where sounds are coming from using their heads, they use this combination of information to avoid predators. There is a strong link between sight and sound in the way birds hunt, and evade being preyed upon. Birds’ hearing is superior to our own in some ways, well in the ways that matter to their survival at least.

Birds are able to hear lower and shorter sounds than we can. This allows them to hear softer calls of contact and helps them to recognise the songs of their close associates and others of the same species as themselves.

Birds Ears Are Very Similar To The Ears Of Reptiles

The outer ear of a bird has a short external passage (meatus) which is hidden behind the feathers at the side of the head. Most birds also have a muscle in the skin around the meatus that they can close completely or partially depending on the circumstances.

In reptiles, the tympanic membrane bulges outwards in most types. However in birds, it is made from 2 separate membranes, with the outer membrane acting as a safety bumper, to prevent the inner one from injury. The inner surface of the tympanic membrane has an ossicular chain attached that sends vibrations to the cochlea. The ossicular chain is similar in both birds and reptiles, the cochlea of a bird is very similar to that of a crocodile.

Why Do Birds Have Ears?

The obvious answer is of course, to hear, and they use their ears to listen for danger. But they also use their hearing to communicate with their kin and also to identify their mates over long distances. For example, the male Emperor penguin leaves his mate to gather food for a journey consisting of many days. When He returns to the general area where he left her, along with many other Emperor penguins, he is able to hear her specific call and locate her. There are not many other species other than birds that display this level of audible ability.

Just like us, a bird’s ear is an organ of balance. They consist of 3 semicircular canals all situated above the part of the inner ear called the utriculus. Each of these canals lie in the 3 plains of the natural world and are named the anterior, posterior and the horizontal.  Birds’ ears contain a fluid and sensitive hairs (just like ours) any movement of the head makes the fluid move which triggers the sensitive hairs. Depending on the degree of movement in the liquid in each of the canals alerts the bird to where its head is at.

Birds Can Hear From Inside The Egg

Some birds like mallards have a special call they use just when they are on their eggs, so that once they hatch, all the mother has to do is give that special call and her chicks will flock to her. This is a handy defensive weapon against predators.

How do birds hear without ears?

Birds do have ears, but they also use their heads as part of their hearing devices. The shape of a bird’s head plays a large part in how it hears and where it hears sounds from.

Where are ears on a bird?

Birds’ ears are located just below and behind their eyes. But you can’t see them as they are covered in special feathers to protect them.

Are owls the only bird with visible ears?

Owls don’t have visible ears, what they have are tufts, which are used as camouflage and as a defensive posturing tool against other owls.