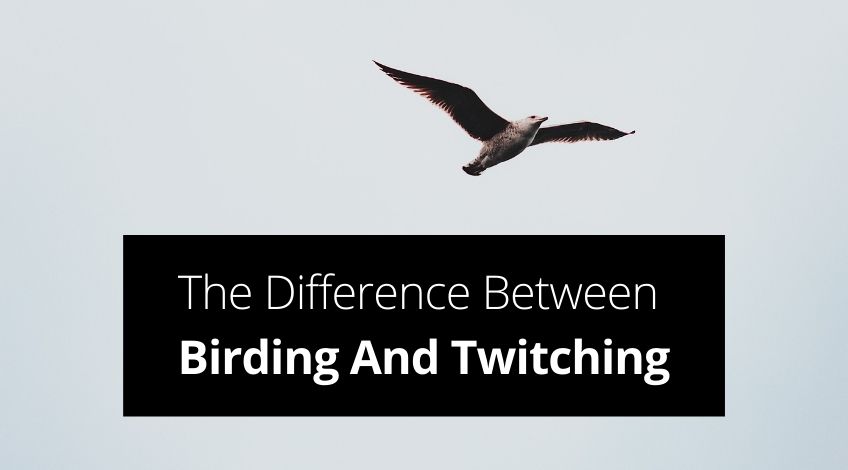 The Difference Between Birding And Twitching

In a nutshell, birding is the peaceful art of bird watching, the birder feels at one with nature, he (or she) makes no sound, leaves no mess and there is nothing to show they have been there after they have left. The twitcher, on the other hand, is more concerned with their personal achievements than they are for the environment and have often been known to drive more than 400 miles to spot a rare bird.

And then they’re off in search of the next bird on their list.

Description Of A Birder (One Who Practises Birding)

Birding is the art of bird watching, it’s a non-competitive pastime, that said, some bird watchers are very competitive. To the point of losing work days to go birding, but the average bird watcher is a sedate human being who spends his or her free time watching birds. Either locally or an hour or two up the road from home.

They record their spots on charts as much for their own enjoyment as to show them to others of a like mind and interest.  Most bird watchers are polite, caring human beings who just enjoy being out in the fresh air watching birds.

Description Of A Twitcher

The twitcher started off as a bird watcher, but then became obsessed with finding the next bird on their list. Or they had a compulsion to be the first in their group to spot a particularly rare bird, potentially to the point of lying (in extreme cases). They may have never spotted the rare bird in question, or they may have even broken the law by trespassing onto private property to spot a rare bird.

Although they’re obviously not all rude, the stereotype is often presented as someone who’s a bit more of a pushy individual that can be seen chasing multiple birds at once.

A healthy obsession with nature is great, but bird watchers beware – twitching creeps up on you. And suddenly you are a twitcher.

The 3 Stages Of Bird Watching

There are 3 specific stages of bird watching, the first 2 are quite normal and cause no problems for the participant or their friends and family. The last stage however can be fatal to friendships and also result in broken families. The 3 stages are:

Bird watchers are the individuals who stand or sit in their backyards watching the birds. They also stop occasionally on the side of the road to watch the birds. In some cases they will just go with a friend who just happens to be a birder.

Once you start to take trips specifically for the sole purpose of watching the birds, you have become a birder. Your interests include, watching birds, reading books about birds,watching youtube videos about birds, buying field guides, bird identifier books, bird food for the garden and a birdbath.  You also invest in a pair of decent binoculars, and a spotting scope. Then you buy a new phone with a better camera.

Next it’s a tripod to steady the scope whilst digiscoping. Then you find yourself taking weekend trips away to the country, to spot species not seen in the cities. Even a few rarer birds put in an appearance. You start to share your new found knowledge with other, less knowledgeable people than yourself. Sharing field guides, notes, photos and video clips. As a birder, you’re a law abiding citizen who sticks to the paths and trails, takes home your litter and always leaves the countryside as you found it.

If you notice a rare bird in an area that they’re not normally seen in, but is easy to access from your town. You share that location with your network of fellow birders so they all may go and enjoy this wonderful, rare sight. You are also tolerant of others who have differing opinions on the species of bird you have recently identified. Plus, of course, you are respectful of all by-laws and regulations concerning trespassing and you would never enter a field without the permission of the landowner first.

The term twitcher applies to those bird watchers who are overly obsessed with spotting a rare bird before anyone else. And displaying their find to the entire bird watching world in any way possible. Nowadays that will probably mean via the internet, but before the days technology moved on they would write letters, or telephone as many different ornithological club secretaries as they could find.

Serious twitchers find themselves on aeroplanes flying to far away exotic places to spot an exotic bird in its natural habitat. Some extreme twitchers have been known to fake rare sightings just for the acclamation of their fellow twitchers.

Sadly some twitchers have been caught guilty of:

So What Is The Difference Between Birding And Twitching?

The main difference between birders and twitchers is their underlying personalities. One is calm, passive and relaxed, while the other is competitive to the point of unhealthy obsession.

So now you have the full facts on the difference between birders and twitchers, where do you fit in? Let us know in the comments below. Thanks for reading, and maybe we’ll meet up in a field somewhere.

Twitching is an extreme kind of bird watching, twitchers tend to be overly obsessed with searching for more birds than anyone else. They’ve also been caught (in some instances) breaking the law to get a glimpse of the bird they’re trying to see.

What is the difference between birding and bird-watching?

If you just notice birds when you are travelling, you’re a bird watcher. If you are prepared to travel halfway around the country, you’re a birder.

What is the nickname for bird watchers?