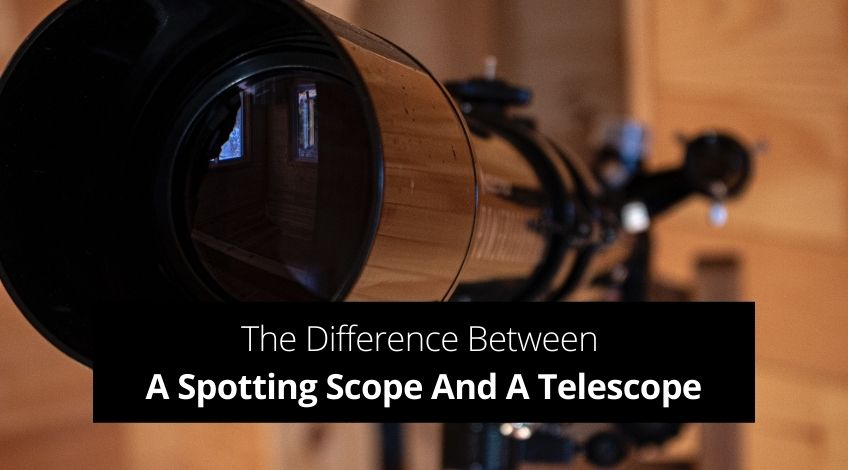 What Is The Difference Between A Spotting Scope And A Telescope?

You’re probably here because you’re facing the dilemma of what to buy. A telescope or a spotting scope. So let’s have a long hard look at both and see what the differences are between them.

Let’s start with a short description of each so we’re sure we’re all thinking about the same optical objects, and then get into the specifics.

What Is A Spotting Scope?

A spotting scope is a single optical shaft capable of relatively high magnification, many with a zoom lens and large objective lens to allow plenty of light in to illuminate whatever you’re looking at. Scopes are usually waterproof and fog proof relatively portable but due to the high level of magnification, need to be supported by a tripod.

Sometimes described as one half of a pair of binoculars due to the design of the internal workings. Or as a lower powered telescope. They are similar in design to binoculars except they have a far greater level of magnification and only a single lens tube. Scopes are available with straight or angled eyepieces which allow far more versatility of use.

What Is A Telescope?

A telescope is a similar design in as much as it is a single lens tube with an eyepiece at one end and an objective lens at the other to allow light in to illuminate the object you’re looking at. Telescopes generally have far greater magnification levels than spotting scopes and larger objective lenses too.

Telescopes also need to be supported by a tripod due to the high levels of magnification. Telescopes are designed to allow more light in so that low light objects like far distant stars are made visible. The image that is seen through a telescope is upside down due to the design of the internal optics. Telescopes have been specifically designed for astronomy and this is where they excel.

What Are The Differences Between Spotting Scopes & Telescopes?

Now we have a better idea of what we’re looking at, let’s look closer at the functions and features of both spotting scopes and telescopes.

What Are The Magnification Differences?

Spotting scopes average at around 60x magnification with the odd few reaching 100x. Many have zoom lenses which give the capability of changing the magnification level from say, 20x to 60x with ease.

Telescopes on the other hand are usually far more powerful in their magnification levels. Ranging from 120x, 340x and with some capable of 500x telescopes win hands down in the magnification stakes.

However there is a catch, telescopes have a fixed lens, which often can be exchanged for a different, more powerful lens but you’ll need to move the telescope from whatever you’re trying to view. Whereas a spotting scope with a zoom can increase magnification without losing the target.

As we said earlier spotting scopes often have a zoom feature on the lens whereas telescopes have fixed lenses that can often be exchanged but this of course takes time and you generally move the telescope to change the eyepiece.

What About The Stability Of The Image?

Due to their high powered magnification, both spotting scopes and telescopes need a tripod or some sort of support to keep the image stable.

Which Is More Portable Telescopes Or Spotting Scopes?

How About Close Focus?

Close focus is the term used to describe how close to an object you can be and see it clearly. There are spotting scopes with a close focus of around 2 metres (6ft 6 inches) whereas telescopes aren’t designed for close focus at all, they’re designed for focusing on objects very far away.

Which Has A Bigger Field Of View?

Which Is More Versatile Spotting Scopes Or Telescopes?

There are numerous types of spotting scopes available, full size, compact, wide-angled, fixed magnification and zoom, most are waterproof and fog proof and there are even interchangeable eyepieces for use in astronomy.

Telescopes on the other hand, can have different sizes, some come with motorised tripods for use with computer programs and some have interchangeable reflectors and refractors but spotting scopes are far more versatile overall than telescopes which were actually designed for just one task – Astronomy.

How About Various Applications Of Spotting Scopes Vs Telescopes?

Spotting scopes can be used for many different hobbies including;

Telescopes can only be used for astronomy, it’s what they were designed specifically for.

How Do Spotting Scopes & Telescopes Compare On Price?

What Are The Pros & Cons Of Spotting Scopes?

What Are The Pros & Cons Of Telescopes?

What’s Best: A Spotting Scope Or A Telescope?

The best way to describe this is there are different horses for different courses, and likewise with these two types of optics. It’s like trying to compare a tomato with a lemon, they’re both fruits, but they’re used for different purposes. If all you’re interested in is astronomy, then a telescope is the most suitable purchase for you to make.

However, if you are looking for more magnification power than a pair of binoculars but still want an optic that’s portable, applicable for many different sports and hobbies, is affordable, waterproof, fog proof, robust and features a zoom lens then you have to choose a spotting scope.

Which is better spotting scope or telescope?

It depends on what you intend to use it for. Telescopes are the best for astronomy but spotting scopes are far more versatile, easier to carry and move about, lighter weight, cost less and can be used for many hobbies and sports.

What is the difference between a spotting scope and a monocular telescope?

Can you use a spotting scope for astronomy?

What should I choose, a spotting scope or a telescope?