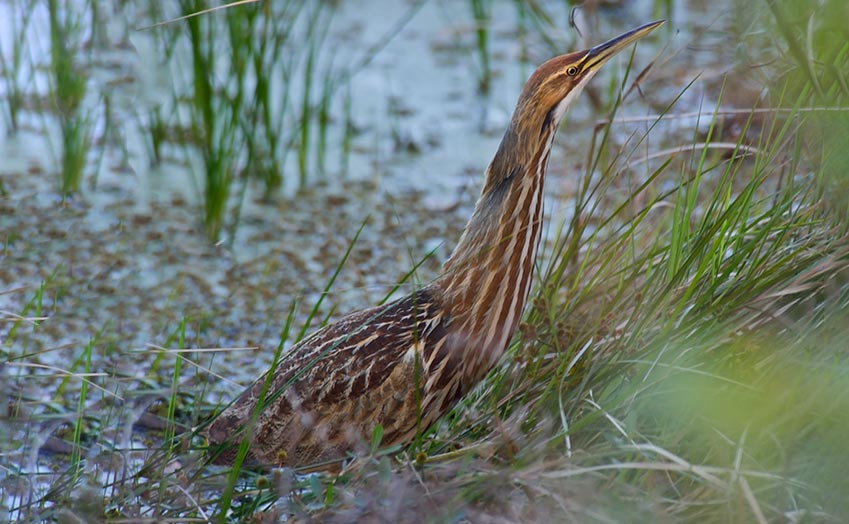 Did you know: The Bittern is one of the UK’s rarest breeding birds, with a population of just a few hundred pairs?

The Bittern is a mysterious and elusive bird, often hiding among the reeds and rushes in wetland habitats. With its distinctive “booming” call, the Bittern is a memorable and captivating species.

The Bittern is a medium-sized bird with a distinctive appearance. It has a long, slender body and neck, with long legs and a sharp, pointed beak.

It is primarily brown in color, with a mottled pattern on its upperparts that helps it blend in with its surroundings. Its underparts are a lighter, buff-colored hue.

The Bittern has a distinctive “plumage”, or feather arrangement, that is especially adapted for life in its wetland habitat. Its feathers are dense and waterproof, helping to keep the bird dry and warm in its aquatic environment. Their feathers are also structured in a way that helps it blend in with its surroundings, making it almost invisible among the reeds and rushes.

The Bittern is a skilled hunter, using its keen eyesight and stealthy movement to catch fish and small mammals. Its eyesight is especially adapted for hunting in low light conditions, such as those found in its wetland habitat. The Bittern is also known for its stealthy movement, using its long, slender legs to walk slowly and quietly through the reeds and rushes in search of prey.

When hunting, the Bittern will often stand motionless, waiting for an opportunity to strike. When it spots its prey, it will quickly lunge forward, using its sharp beak to catch and kill its victim. The Bittern’s diet consists mainly of fish, but it will also feed on amphibians, reptiles, and small mammals such as mice and voles.

In addition to its keen eyesight and stealthy movement, the Bittern’s unique feather structure helps it blend in with its surroundings, making it almost invisible to it’s prey among the reeds and rushes. This, combined with its patient hunting style – makes the Bittern an efficient and effective predator.

The Bittern is a shy and elusive bird, and it is not often seen, but its distinctive “booming” call is a sure sign of its presence in a wetland habitat. This deep, resonant call can be heard from over a mile away and is used by male Bitterns to attract females and defend territory.

Their famous booming call is produced by inflating an air sac in their neck, which amplifies the sound and carries it over long distances. The call is a series of deep, guttural “booms” that can last for several minutes at a time. It is often described as sounding like a distant drumbeat or a muffled foghorn.

It is most often heard during the breeding season (from late April to early June). Male Bitterns will perch on tall reed stems and emit their distinctive call in an attempt to attract a mate. They will also use their call to defend their territory from other male Bitterns.

The Bittern’s booming call is one of the most distinctive sounds of the UK’s wetland habitats, and it is an iconic feature of the British countryside. Despite its elusive nature, the Bittern’s call is a sure sign of its presence in a wetland habitat and is a joy to hear for anyone lucky enough to encounter it. 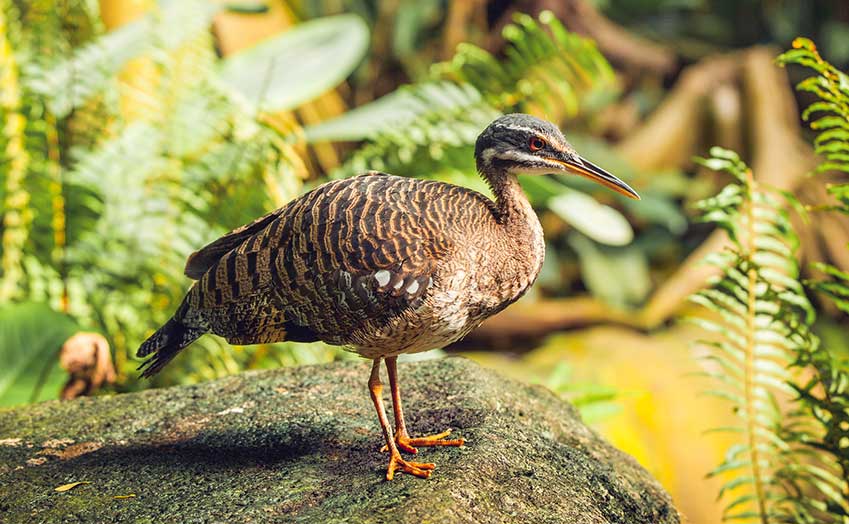 If you've took any pictures of a Bittern at a stage that we don't currently have an image of that you wouldn't mind sharing with us, it'd be a great help if you submitted it to us so that the 1,000's of people who rely on these pages can learn more about the Bittern.

Facts About The Bittern