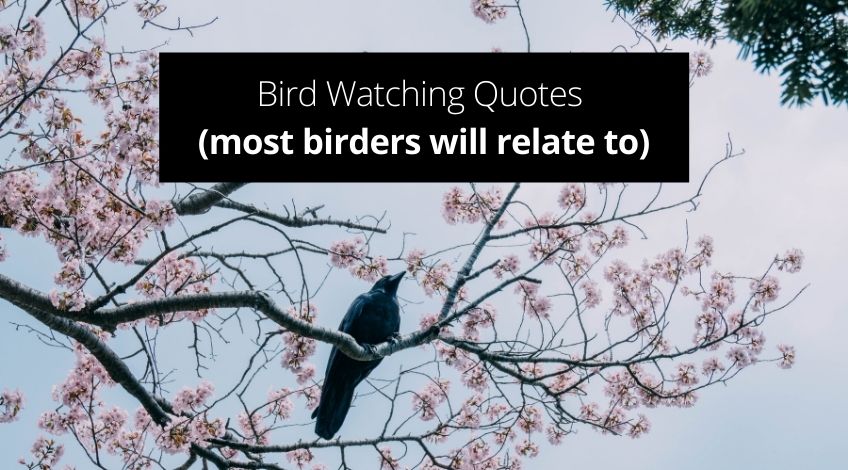 Bird Watching Quotes (most birders will relate to)

There’s something so rewarding about bird watching, we feel like we are witnessing a world that is often missed by many people. A secret world full of beauty and immense pleasure in watching such delicate yet strong creatures go about their daily life. Just 30 minutes of bird watching can set us up for whatever the day has in store for us.

If you get great pleasure from watching our feathered friends as they gather food, bathe, drink or just teach their young how to survive. We think you’ll appreciate the following quotes about birds and bird watching. Let us know in the comments which quote is your favourite.

1.“The earth has music for those who listen” – William Shakespeare

Not a direct bird watching quote but any bird watcher can relate to this famous quote from the Bard.

3.“It is not only fine feathers that make fine birds.” -Aesop

4.“In order to see birds, it is necessary to become a part of the silence.” -Robert Lynd

5.“If birds can glide for long periods of time, then why can’t I?” -Orville Wright

Orville along with his brother Wilbur invented the first successful aeroplane.

6.”Be as a bird perched on a frail branch that she feels bending beneath her; still, she sings away all the same, knowing she has wings.”– Victor Hugo.

7.”Until you spread your wings; you’ll have no idea how far you can fly.”- Napoleon Bonaparte.

8. “No bird soars too high if he soars with his own wings.”– William Blake.

9.”You cannot fly like an eagle with the wings of a wren.”- William Henry Hudson

10. “God gives every bird its food, but He does not throw it into its nest.”- Josiah Gilbert Holland.

11. “The presence of a single bird can change everything for one who appreciates them.”- Julie Zickefoose

12.”The reason birds can fly and we can’t is simply because they have perfect faith, for to have faith is to have wings.”- J.M. Barrie

14. “Faith is the bird that feels the light and sings when the dawn is still dark.”- Rabindranath Tagore.

15. “There is nothing in which the birds differ more from man than the way in which they can build and yet leave a landscape as it was before.”- Robert Wilson Lynd

17.”How can you expect the birds to sing when their groves are cut down?”- Henry David Thoreau

18.”Nothing in the world is quite as adorably lovely as a robin when he shows off – and they are nearly always doing it.”- Frances Hodgson Burnett

20. “Everyone likes birds. What wild creature is more accessible to our eyes and ears, as close to us and everyone in the world, as universal as a bird?”-Sir David Attenborough.

21. “Not humans, but birds often witness the most beautiful mornings in this world!”- Mehmet Murat İldan.

23.”Birds sing after a storm; why shouldn’t people feel as free to delight in whatever sunlight remains to them?”- Rose Fitzgerald Kennedy.

24. “I’m very happy being me, although sometimes I’d love to be a bird so that I could fly.”- Joy Fielding.

27.“Faith without works is like a bird without wings; though she may hop with her companions on earth, yet she will never fly with them to heaven.”-Francis Beaumont

28.”Birds born in cages think that flying is an illness.”-Alejandro Jodorowsky

29.”Caged birds accept each other but flight is what they long for.”-Tennessee Williams

30.”We think caged birds sing, when indeed they cry.”-John Webster

31.”The rising of birds in their flight is the sign of an ambuscade. Startled beasts indicate that a sudden attack is coming.”-Sun Tzu

32.”Hear how the birds, on every blooming spray, With joyous music wake the dawning day.”-Alexander Pope

33.”Birds are not free since Men have invented cages.”-Mehmet Murat ildan

34.”A bird is joy incarnate.”-Myrtle Reed

35.”A bird in a cage is not half a bird.”-Henry Ward Beecher

36.”Each bird must sing with his own throat.”-Henrik Ibsen

37.”Blackbirds are the cellos of the deep farms.”-Anne Stevenson

38.”It is a foul bird that filleth his own nest.”-John Heywood

39.”Birds are the first and the greatest performers.”-Olivier Messiaen

40.”How can a bird that is born for joy sit in a cage and sing?”-William Blake

41.”It’s reassuring to know that the garden birds are there, even when I’m not.”-Joe Harkness

43.“There are approximately ten thousand species of birds on the planet and no single individual has seen them all.”― Bernd Brunner

44.“There is an unreasonable joy to be had from the observation of small birds going about their bright, oblivious business”― Grant Hutchison

45.“Some people are very competitive in their birding. Maybe they’ll die happy, having seen a thousand species before they die, but I’ll die happy knowing I’ve spent all that quiet time being present.”― Lynn Thomson

47.“On a day like this, I can’t imagine anything better that might happen in a person’s life than for them to start paying attention to birds—to become aware of this magical world that exists all around us, unnoticed by many but totally captivating for those who know its secrets. This kind of spring day, with its bountiful myriads of colourful sprites just arrived from tropical shores, has to be one of the greatest gifts of life on Earth.”― Ken Kaufman

48.“… I had also started to recognise just how positive I felt when I was immersed in the world of birds. My worries seemed to fade into insignificance and when I was feeling stressed, if I counteracted it with some time outside, watching them, it drifted off like birds do, in a stiff breeze.”― Joe Harkness

49.“We seem to birds to be chained to planet Earth.”― Mokokoma Mokhonoana

50.“You must have the bird in your heart before you can find it in the bush.”― John Burroughs

Which Is Your Favourite?

That’s 51 bird watching quotes we think most birders will relate to. Which is your favourite? Let us know in the comments.