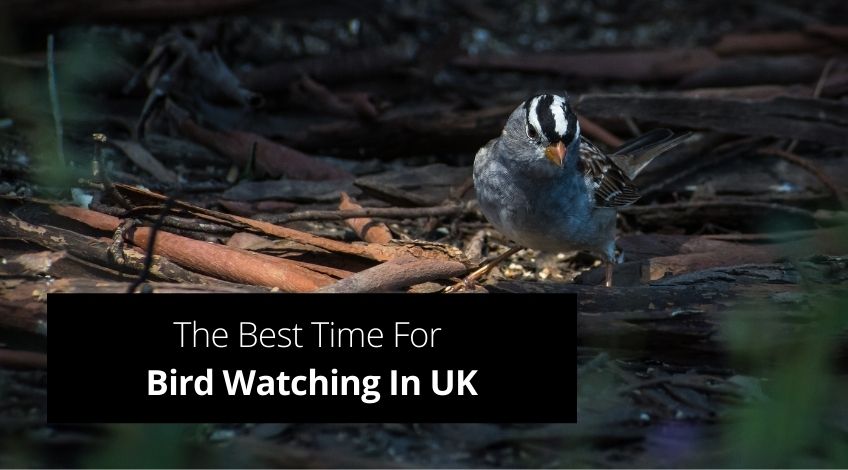 What’s The Best Time For Bird Watching In UK?

There are many factors to consider when starting a new hobby and bird watching is no different. The best time to watch birds is whenever you have the time but if you want to see more species of birds at their most active then you need to plan. In this article we’ll share all the information you need to become a successful bird watcher.

All birds irrespective of type, are most active during the early morning daylight hours. They actually start their songs before day breaks. However, birds begin feeding and searching for food as soon as it is light enough. As they live hand to mouth as it were, they need to actively source their food before they do anything else every day.

So as the old saying goes;

The early bird catches the worm

When Is The Best Time To See Birds?

Whatever the time of day and no matter what location you’re in, you will always see some birds. But the best time to see the greatest number of birds are the transitional times. That way you get to see nocturnal and diurnal birds, some coming while the others are going.

The Best Time For Beginners

If you’re completely new to birdwatching and you’re looking for a time to go when you’ll get the most out of your time spent, we advise going out in the early morning during Spring or Summer. This is because there will be more birds around, plus they’re at their most active early in the morning.

If you possibly can, we’d recommend you to get set up just before dawn breaks as this means you’ll be in the perfect position to watch the birds as they first emerge from their nests and start their daily search for food. As all diurnal species of birds need to find food every day and in many ways they’re competing with each other, you will find they are most active in the early morning light.

Plus there are generally less people about early in the morning which means the birds stay visible for longer giving you a greater opportunity of observing without them getting startled and flying off. As this fact is well known among the bird watching community, there’s a good chance of you meeting some expert bird watchers too. Many of whom will be only too happy to share some of their knowledge with you.

You can often see more species of birds in the hour before darkness falls in the UK than you’ll see in the early morning. This is because the diurnal birds will be rushing around getting a last feed of the day before they retire for the night. Plus many nocturnal birds will just be starting their hunt for food. Both transitional periods are great times for spotting both diurnal and nocturnal birds but early evening seems to attract more nocturnal species.

Sadly the lower level of light makes it more difficult to identify bird species and of course the light is waning so bird watching at dusk has a limited time span. However some of the greatest silhouette images ever taken of British birds were taken in the waning daylight hours.

Once the diurnal birds have satisfied their hunger and quenched their thirst, they become less active (unless it’s during the nesting period or Spring and early Summer). However, during the midday period the sun heats up the layers of air. This makes the hotter air rise in columns and the cooler air fall to ground level.

Many birds take advantage of the rising air to climb ever higher to get the drop on their prey. This makes the middle part of the day the optimum time to spot birds of prey. Peregrine Falcons, Harrier Hawks etc are all more active during our lunchtime period.

Don’t dismiss the hours of darkness if you’re a bird watcher, because this is the best time to observe owls. These magnificent birds of prey are often few and far between but that makes spotting one in action all the more of a treat. Plus if you’re really lucky you might catch a glimpse of a nightjar or hear a nightingale singing.

As you might have gathered from reading so far, not all birds like the same light conditions or time of day. You need to consider which types of birds you want to see and set off at the correct time for that species. As we’ve already stated, dawn and dusk are the best time for seeing as many species in the greatest numbers.

Then you’ll need to go bird watching in the early morning. If you’re interested in watching hunters at work, birds like;

You’ll be better off bird watching around lunchtime (in the right area). If nocturnal birds are on your list, birds like;

Then you’ll be best going bird watching from dusk onwards.

When Is The Worst Time For Bird Watching In The UK?

There is no worst time for bird watching really, whatever time you are alert and looking for birds, there will be some birds around. However, the time of day when birds are least active is the afternoon. There are some exceptions to this, like if it’s been extremely foul weather all morning and the birds never found enough food etc. But on the whole they are least active during the afternoon.

Why Are Birds Busy At Certain Times?

In the natural world, the world where birds live, survival is the main objective. To maintain their survival all birds need to practice a number of actions, like; feeding, hydrating, preening, reproducing and dodging predators. Can you see now why many songbirds are more active during early mornings? It’s because birds of prey are not active until midday.

Songbirds are active in the early morning because there are less predators and just as importantly, more insects – food. For other songbirds, the early morning light is perfect for identifying seeds, fruit, nuts and berries. When they enter ponds or rivers the light allows them to spot predators faster and make their escape.

Why Do Birds Sing Early In The Morning?

Birds sing for a number of reasons, it’s their main way of communication with other birds, they sing to attract a mate for reproduction, to warn off others from their territory, and to call their young back to the nest etc. Why early in the morning? Because that’s when there’s less noise pollution, their voices sound out loud and clear over vast distances.

What Are Birds Doing When They’re Not So Visible?

During the afternoons, when most birds are not so visible, they are either hiding from predators, resting, sleeping, mating, preening or perching.

When’s The Best Time Of Year To Go Bird Watching?

From a bird’s perspective, there is no best time of year for bird watching. During any season there will be birds to watch, but different times of the year bring different types of birds. Many birds are migratory, which means they’re only here for a season or two.

The Best Time Of Year For Newbie Birders

If you have no practical experience of bird watching and you’re wondering when the best time to start is, we’d almost always say that it’s during Summer or Spring for the UK. This is because with birds nesting during these months, they are at their most active (as they have to provide for their family). And so you’ll certainly get to see a lot of birds during this time.

With that said, Autumn sees an influx of many migratory bird species, which gives you the chance to see birds that are not so common in the UK. Which might be more enjoyable if you have had some experience in the past.

Here in the UK, we are constantly witnessing a flux in the population of wild birds. There are more than 4,000 species of feathered visitors toing and froing across our skies every year. That’s roughly 40% of the total species of birds worldwide.

It’s all part of the natural migratory pattern that helps the bird population to survive. Many birds fly South from colder Northern climes such as Scandinavia and Canada to overwinter in the relatively warmer UK. At the same time others are leaving the UK to fly to even warmer climes in Southern Europe and Africa, only to return next Spring.

Some Of The Birds That Visit The UK And When

To give you some idea of the various bird species that visit our shores in the course of the year. Below are lists of the seasons and some of the birds that arrive during that particular season.

These lists are by no means inclusive, there are many more migratory bird species that arrive in the UK every year plus some anomalies that get blown off course and turn up for a few days to recuperate before continuing on their journey elsewhere.

The weather does affect bird watching. This is because like us, birds are less active during extreme weather events. Too hot or too cold and there will be far less bird activity than usual. WIth that said, birds still have to eat and stay hydrated, so they will still have to venture out at some point.

What Do Birds Do In Bad Weather?

When the weather is too bad, birds seek shelter in much the same way we do. If they sense bad weather approaching, they will forage more and fill themselves with as much food and water as possible to keep them going until the bad weather passes.

Where do birds go when windy?

When it’s windy, birds keep low to the ground or hide behind any natural shelter they can find. Rocks, fences, outbuildings, anywhere that provides some protection from the wind will be used by the canny birds.

Do birds sing in the rain?

Birds do still sing in the rain.

Which is the first bird to sing in the morning?

The first songbirds you will hear in the morning are usually robins, wrens and blackbirds.